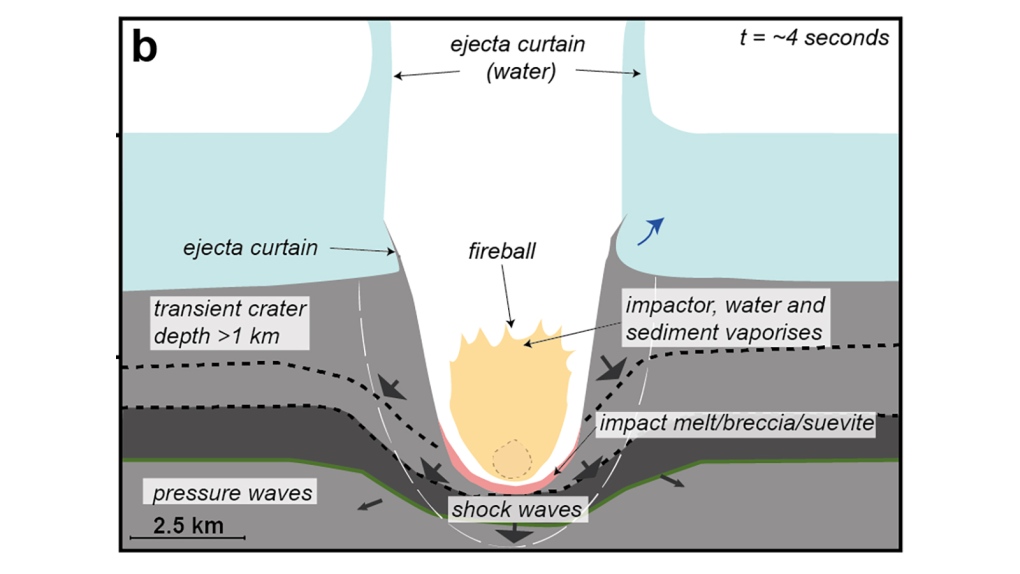 A diagram, incorporating seismic observations and computer simulations, of how the Nadir Crater formed. (Courtesy Republic of Guinea, TGS and Western Geco/CNN)

An asteroid from space slammed into the Earth's surface 66 million years ago, leaving a massive crater underneath the sea and wreaking havoc with the planet.

No, it's not that asteroid, the one that doomed the dinosaurs to extinction, but a previously unknown crater 399 kilometres (248 miles) off the coast of West Africa that was created right around the same time. Further study of the Nadir crater, as it's called, could shake up what we know about that cataclysmic moment in natural history.

Uisdean Nicholson, an assistant professor at Heriot-Watt University in Edinburgh, happened on the crater by accident -- he was reviewing seismic survey data for another project on the tectonic split between South America and Africa and found evidence of the crater beneath 400 metres of seabed sediment.

"While interpreting the data, I (came) across this very unusual crater-like feature, unlike anything I had ever seen before," he said.

"It had all the characteristics of an impact crater."

To be absolutely certain the crater was caused by an asteroid strike, he said that it would be necessary to drill into the the crater and test minerals from the crater floor. But it has all the hallmarks scientists would expect: the right ratio of crater width to depth, the height of the rims, and the height of the central uplift -- a mound in the center created by rock and sediment forced up by the shock pressure.

The journal Science Advances published the study on Thursday.

"The discovery of a terrestrial impact crater is always significant, because they are very rare in the geologic record. There are fewer than 200 confirmed impact structures on Earth and quite a few likely candidates that haven't yet been unequivocally confirmed," said Mark Boslough, a research professor in Earth and Planetary Sciences at the University of New Mexico. He was not involved in this research but agreed that it was probably caused by an asteroid.

Boslough said the most significant aspect of this discovery is that it was an example of a submarine impact crater, for which there are only a few known examples.

"The opportunity to study an underwater impact crater of this size would help us understand the process of ocean impacts, which are the most common but least well preserved or understood."

The crater is 8 kilometres (5 miles) wide, and Nicholson believes it was was likely caused by an asteroid more than 400 metres (1,300 feet) wide hurtling into the Earth's crust.

While much smaller than the city-sized asteroid that caused the 100-mile-wide Chicxulub crater that hit off the coast of Mexico that led to the mass extinction of much of life on the planet, it's still a pretty sizable space rock.

"The (Nadir) impact would have had severe consequences locally and regionally -- across the Atlantic Ocean at least," Nicholson explained via email.

It would have caused an "exceptionally large" tsunami wave up 3,200 feet high (1 kilometre) around the crater, dissipating to around five meters high once it reached South America.

By comparison, the in-air explosion of a much smaller 50-metre wide asteroid in 1908 in Russia, known as the Tunguska event flattened a forest across an area of 1,000 square kilometers.

"At 400 metres or so, the air blast (that caused the crater off West Africa) would have been orders of magnitude larger."

Information from microfossils in nearby exploration wells show that the crater was formed around 66 million years ago -- at the end of the Cretaceous period. However, there's still uncertainty -- margin or error of around 1 million years -- about its exact age.

Nicholson said it was possible that the asteroid strike was linked to the Chicxulub impact, or it could simply be a coincidence -- an asteroid of this size would hit Earth every 700,000 years.

If linked, the asteroid could be the result of a break-up of a parent asteroid near the Earth -- with the separate fragments dispersed during an earlier orbit of Earth, or it was possible that it was part of a longer-lived shower of asteroids that hit the Earth over a period of a million years or so.

"Finding out the precise age is really critical to test this -- again, only possible by drilling."

Even if linked, it would have been dwarfed by the Chicxulub impact, but it would have still added to the overall cascading set of consequences, he said.

"Understanding the exact nature of the relationship with Chicxulub (if any) is important to understand what was going on in the inner solar system at that time and raised some interesting new questions," Nicholson said.

"If there were two impacts at the same time, might there be other craters out there, and what was the cascading effect of multiple collisions?"

For those looking to buy an orange shirt ahead of Orange Shirt Day on Sept. 30, Indigenous designers are asking the public to make sure their purchase is actually going towards supporting the cause.

opinion | Naheed Nenshi: A moment that changed the fabric of this country forever

Fifty years ago, there was a moment that changed the fabric of this country forever, Naheed Nenshi writes in an exclusive column for CTVNews.ca. For arguably the first time, Canada extended its hand to refugees who looked different, who worshipped differently than most Canadians, but who needed help, the former Calgary mayor says.

Russia was poised Wednesday to formally annex parts of Ukraine where occupied areas held a Kremlin-orchestrated 'referendum' -- denounced by Kyiv and the West as illegal and rigged -- on living under Moscow's rule.