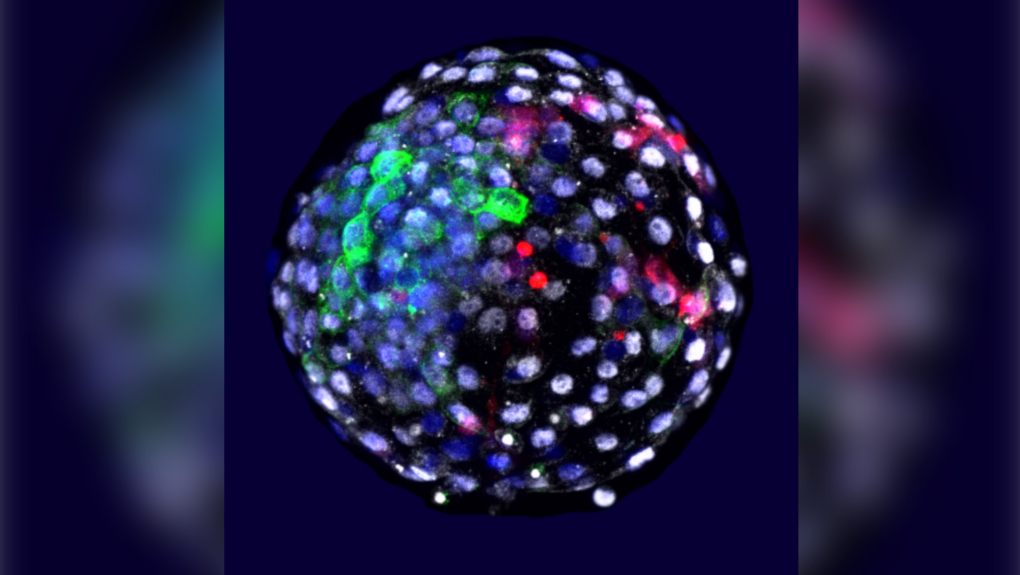 TORONTO -- A new study explores how scientists successfully created the first embryo made with combined human and non-human primate cells.

The findings, published in the journal “Cell”, may “constitute a promising strategy for various regenerative medicine applications,” including organ and tissue generation for transplants, the study says.

Led by scientists at the Salk Institute for Biological Studies in California, the study takes the “next step in chimeric organisms – organisms that contain cells from two or more species to understand a host of diseases and address the severe shortage in donor organs,” according to a release.

“These chimeric approaches could be really very useful for advancing biomedical research not just at the very earliest stage of life, but also the latest stage of life,” said study lead Juan Carlos Izpisua Belmonte in the release.

A previous 2017 study of Izpisua Belmonte’s incorporated human cells into early-stage pig tissue, which was an early effort into investigating being able to produce transplantable organs in the animals – who share similar organ size and internal anatomy to humans.

However, the evolutionary distance between human and pigs (90 million years) produced a low amount of human cells for the project – leading Izpisua Belmonte to try a chimeric formation in a species more closely related to humans, macaque monkeys, the release said.

Izpisua Belmonte likened the process of two types of cells integrating to communicating in different languages, conflating his first experiment with pig and human cells to “trying to get the cells to find common ground between French and Chinese,” whereas human and macaque cells were closer to “Spanish and French.”

In light of the ethical concerns of such an experiment, ethicists and regulatory bodies’ observations are included in the published study to provide guidance on how the data should and could be used. All embryos were destroyed after 19 days of study.

Researchers hope to better understand the communication between hybrid chimera cells to address aging and understand the earliest stages of human development through future work on the subject.