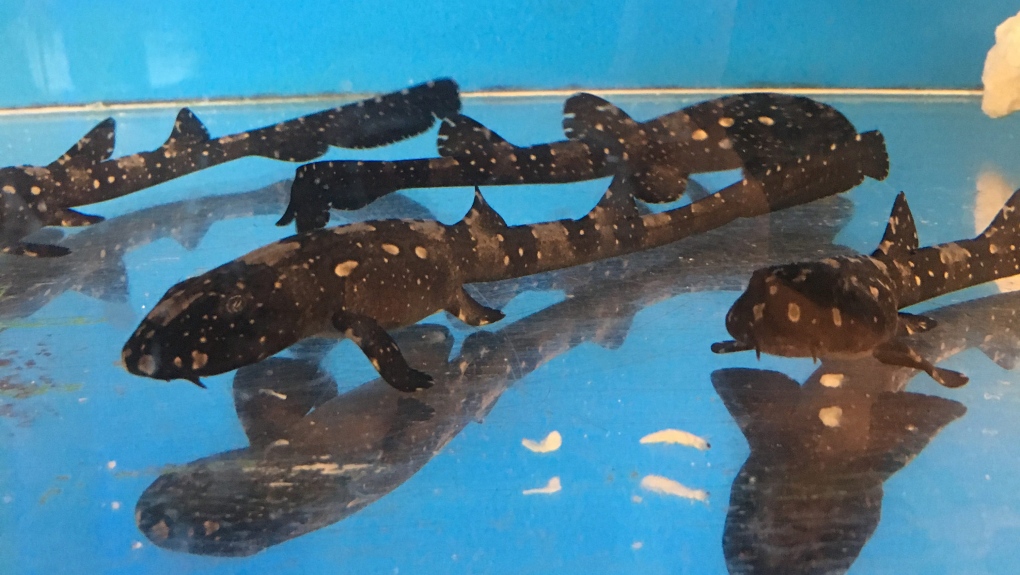 Scientists were able to use artificial insemination to bring 97 baby whitespotted bamboo sharks to life, according to a new study. (Courtesy Jay Harvey, Aquarium of the Pacific via CNN)

Sharks are as fascinating as they are endangered, and scientists have been sounding the alarm on the rate at which shark populations are declining.

Sixteen out of 31 oceanic shark species are now critically endangered or endangered, a study published in the journal Nature found earlier this year. The number of oceanic sharks and rays in the world has declined by 71 per cent from 1970 to 2018, the researchers observed.

Now, scientists have been able to use artificial insemination to bring 97 shark pups to life, a new study published in Scientific Reports revealed, in what a release describes as the "largest-ever effort to artificially inseminate sharks."

Artificial insemination of sharks could foster healthier populations in aquariums by encouraging genetic diversity, removing the need to transport sharks between institutions for mating purposes, according to the researchers. Moving sharks from one place to another is a costly process that is also stressful for the animals.

The study was led by scientists from the South-East Zoo Alliance for Reproduction & Conservation, a nonprofit based in Florida, in collaboration with the Aquarium of the Pacific in California, Ripley's Aquarium of the Smokies in Tennessee, The Florida Aquarium, Adventure Aquarium in New Jersey, and the Field Museum in Chicago.

How to engineer shark pups

Scientists collected semen from 19 male whitespotted bamboo sharks and used it to inseminate 20 females. The study took four years to complete, according to lead author Jennifer Wyffels, who conducted research for the study with the South-East Zoo Alliance for Reproduction & Conservation and is now a postdoctoral researcher at the University of Delaware.

Whitespotted bamboo sharks, or Chiloscyllium plagiosum, a species from the Indo-Pacific Ocean considered "near threatened" by the International Union for Conservation of Nature, were an ideal candidate for this research, Wyffels explained via email.

Reaching a maximum length of about 3 feet (1 meter), "they are a smaller shark species and easier to handle for reproductive procedures compared to 6- to 8-foot (1.8- to 2.4-meter) sand tiger sharks," Wyffels explained.

"Many aquariums have bamboo sharks and that was important so that we could exchange semen between institutions," she added.

"It is much easier to monitor eggs for embryo development than it is to examine a pregnant female shark," Wyffels said.

Two to three females were inseminated at a time, Wyffels explained, but they each had to be monitored for about six weeks prior to confirm they were laying eggs, and that those eggs weren't being fertilized with sperm stored in the body from previous mating encounters -- an ability of many shark species.

"Females that store sperm are no longer dependent on repeated mating with males to fertilize their eggs throughout the laying season and can instead focus their energy and efforts on other activities such as feeding," Wyffels said.

Each trial required nearly nine months to complete before a new one could start, according to Wyffels.

In some cases, male and female sharks involved in the study were located in the same aquarium, but scientists also experimented with the viability of cold-stored semen shipped overnight between participating institutions -- from New Jersey to California, and from Florida to Tennessee.

"The success rate was similar for both which is important because it highlights the feasibility and efficacy of transporting gametes rather than animals," Wyffels told CNN.

Out of the 97 shark pups that were born, 16 came from parents located in different aquariums around the country, Wyffels added.

"This opens the door for international exchange of genes as well as collection of semen from wild sharks for insemination of aquarium females or even isolated populations of wild females," she said.

Importantly, scientists also observed instances of asexual reproduction, or parthenogenesis, a process that allows females to create an embryo without relying on genetic material from a male. These were most surprising to the scientists.

"There were three hatchlings from parthenogenesis from eggs laid by two females that were inseminated," Wyffels said.

"One female in particular had pups via sexual reproduction but then gave birth to two pups 74 and 78 days later via parthenogenesis," said study coauthor Kevin Feldheim, a researcher at Chicago's Field Museum.

In Feldheim's mind, there are many open questions on how parthenogenesis in female sharks actually works.

"Why didn't the female use the sperm that she was inseminated with? Was it no longer viable? Did she 'deem' it poor quality sperm and 'decide' not to use it again?" he said via email.

Feldheim performed DNA analysis on the newborn sharks to determine who their parents were. This was an important aspect of the study, confirming the pups were born as a result of the artificial insemination and not because of stored sperm or parthenogenesis.

The next frontier for sharks

Information derived from this study is already being applied to develop artificial insemination techniques for other shark species, including sand tiger sharks.

"Sand tiger sharks are a protected species that is critically endangered in some parts of its range. They are very charismatic, long lived and popular in aquariums, but they don't often reproduce," Wyffels explained.

"Eventually and with more research, we hope this technique will be used to help other rare and endangered shark and ray species," she said.

Can artificial insemination protect endangered shark species in the long term? Feldheim believes it can play an important role, but he pointed to bigger global issues that need to be addressed, among which are the creation of marine protected areas for species like sharks, cutting down on global bycatch, and tackling climate change.

"While I think artificial insemination will help, we obviously have bigger fish to fry (pun intended)," Feldheim said.