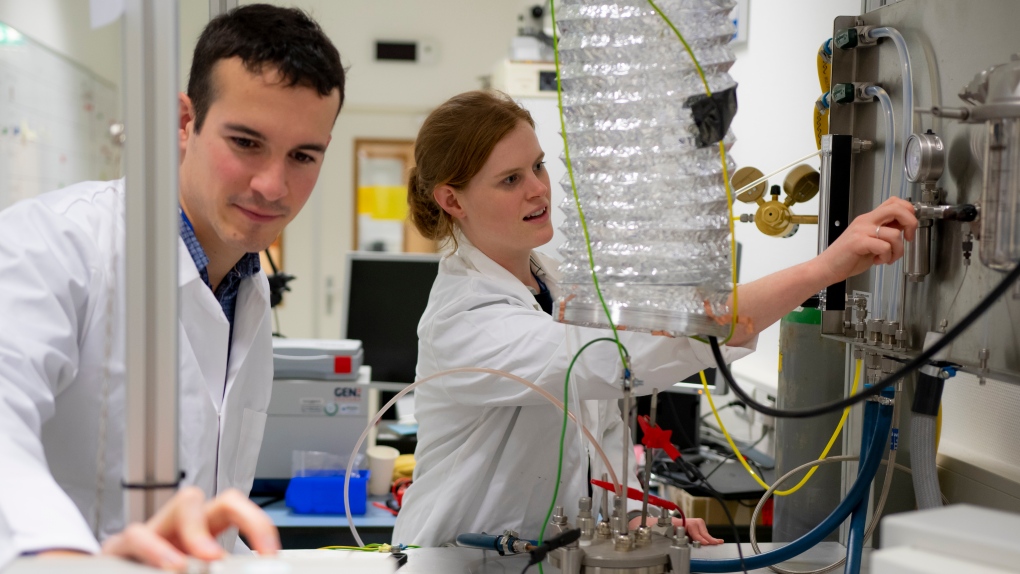 ESA research fellow Alexandre Meurisse and Beth Lomax of the University of Glasgow producing oxygen and metal out of simulated moondust inside ESA's Materials and Electrical Components Laboratory. (ESA)

TORONTO -- The European Space Agency has opened a prototype plant that uses moondust to produce oxygen in their Netherlands-based laboratory.

The plant is located at the Materials and Electrical Components Laboratory of the European Space Research and Technology Centre (ESTEC) based in Noordwijk, a city approximately 50 km west of Amsterdam.

Samples taken from the lunar surface confirm that the moon’s regolith, or the layer of rocky material covering bedrock, is made up of 40 to 50 per cent oxygen by weight, according to an ESA press release.

The oxygen is “bound up chemically” in the form of minerals or glass and so is unavailable for immediate use. ESTEC’s oxygen extraction is being done by a method called “molten salt electrolysis,” where the regolith is placed in a basket with calcium chloride salt and heated to 950 degrees Celsius.

When a current is passed through the materials in the basket, it causes the oxygen to be extracted from the regolith which then migrates across the salt and can be collected at an anode, or electrode.

“Being able to acquire oxygen from resources found on the Moon would obviously be hugely useful for future lunar settlers, both for breathing and in the local production of rocket fuel,” said Beth Lomax, a researcher from the University of Glasgow in the release.

The release notes that the process of oxygen extraction from the moon’s regolith leaves behind metal alloys that can be studied and used.

The goal of this research and extraction of oxygen from lunar materials would be to “design a ‘pilot plant’ that could operate sustainably on the moon,” with the first demonstration slated for the mid-2020s in support of future ESA and NASA crewed lunar missions.