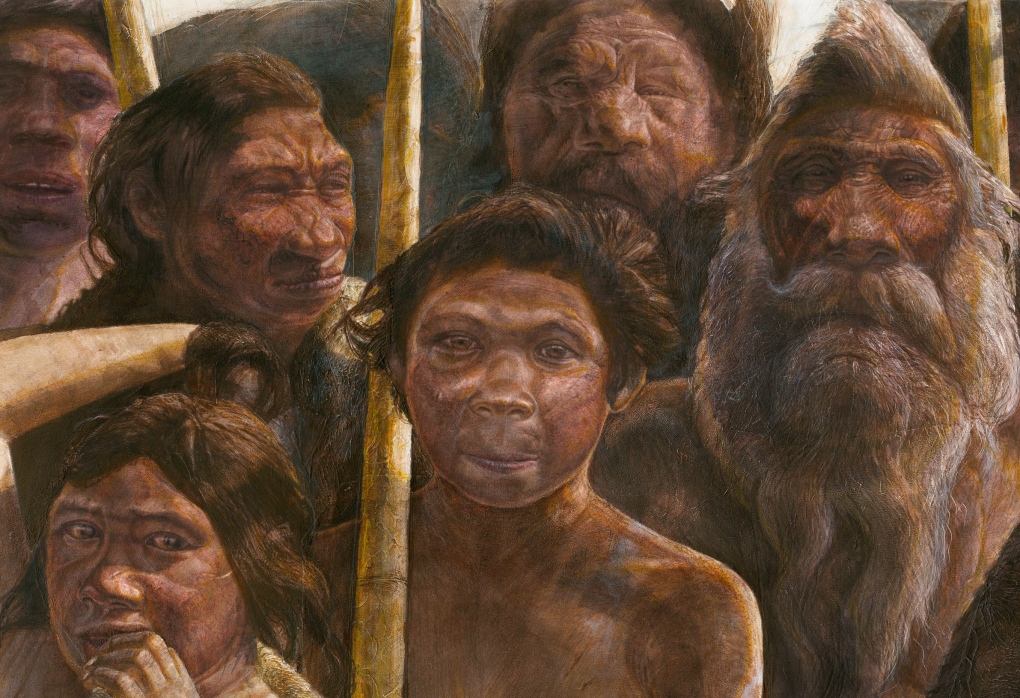 This artist's rendering shows Sima de los Huesos hominins who are estimated to have lived approximately 400,000 years ago during the Middle Pleistocene. (Madrid Scientific Films, Kennis and Kennis)

NEW YORK -- Scientists have reached farther back than ever into the ancestry of humans to recover and analyze DNA, using a bone found in Spain that's estimated to be 400,000 years old. So far, the achievement has provided more questions than answers about our ancient forerunners.

The feat surpasses the previous age record of about 100,000 years for genetic material recovered from members of the human evolutionary line. Older DNA has been mapped from animals.

Experts said the work shows that new techniques for working with ancient DNA may lead to more discoveries about human origins.

Results were presented online Wednesday in the journal Nature by Matthias Meyer and colleagues at the Max Planck Institute for Evolutionary Anthropology in Leipzig, Germany, with co-authors in Spain and China.

They retrieved the DNA from a thighbone found in a cave in northern Spain. It is among thousands of fossils from at least 28 individuals to be recovered from a chamber called the "Pit of the Bones." The remains are typically classified as Homo heidelbergensis, but not everybody agrees.

The age of the bones has been hard to determine. A rough estimate from analyzing the DNA is around 400,000 years, which supports what Meyer said is the current view of the anthropologists excavating the site. Todd Disotell, an anthropology professor at New York University, said geological techniques suggest the remains are older than 300,000 years but it's not clear by how much. By comparison, modern humans arose only about 200,000 years ago.

But surprisingly, the DNA instead showed a closer relationship to Denisovans, who lived in Siberia and apparently elsewhere in Asia, far from the Spanish cave. Scientists are uncertain of how to explain that, Meyer said.

The picture should get clearer if scientists can recover the other kind of DNA, found in the nucleus, from the Spanish bones, he said. Nucleus DNA would give more comprehensive information about evolutionary relationships between species, perhaps telling a story much different from the mitochondrial DNA evidence, Meyer said. Nucleus DNA is harder to recover, but Meyer said he's optimistic that some small fraction might be retrievable.

He also noted that the cave has acted as "the perfect fridge" to preserve the DNA for eons, and said it will be hard to find comparable situations elsewhere.

Experts in ancient DNA called the new paper exciting because it showed scientists can recover older DNA than many had thought outside the deep freeze of permafrost areas. Much of human evolution happened in warmer places.

"We had been operating for a while under the assumption that the oldest DNA we're going to get is about 100,000 years," said Disotell. Now, "we might take a shot at some older samples that we just never would have bothered with in the past."

In warm places like Africa, where DNA does not preserve well, even getting genetic material that is just tens of thousands of years old would be an advance, said David Reich of Harvard Medical School.