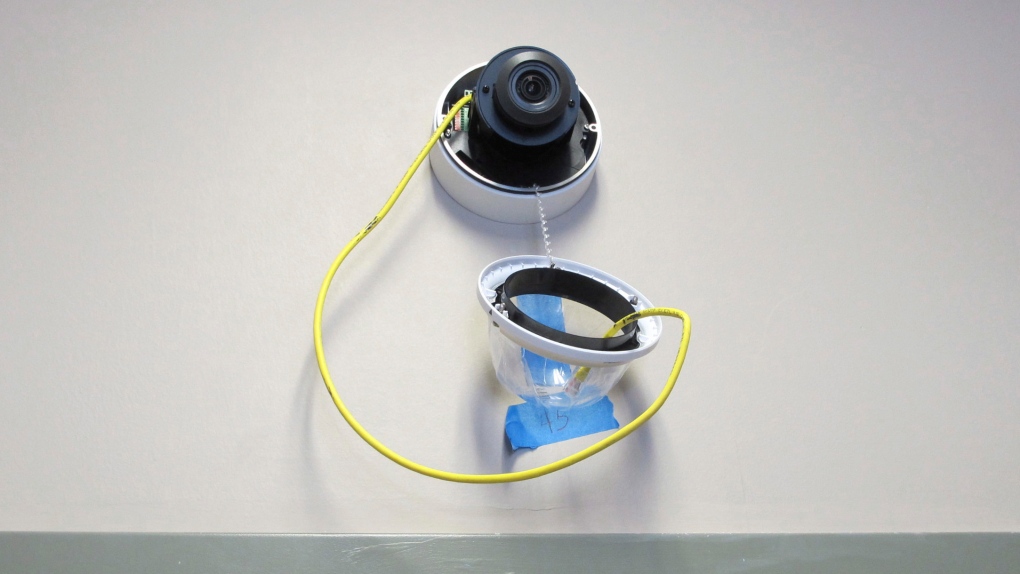 In this July 10, 2018, file photo, a camera with facial recognition capabilities hangs from a wall while being installed at Lockport High School in Lockport, N.Y. (AP Photo/Carolyn Thompson, File)

The Lockport Central School District said it activated the system on Thursday after meeting conditions set by state education officials, including that no students be programmed into the system's database.

Superintendent Michelle Bradley said on the district's website the Aegis system is capable of alerting staff to guns as well as individuals who pose a potential threat, including level 2 or 3 sex offenders, suspended staff members and people flagged by law enforcement or prohibited by court order.

The district originally planned to include certain students, citing the February 2018 attack in which expelled student Nikolas Cruz is charged with killing 17 at Marjory Stoneman Douglas High School in Parkland, Florida. Those plans were scrapped amid privacy concerns raised by the New York State Education Department.

While facial recognition technology has made its way into airports, casinos, stores and stadiums, it is so far rare in public schools. The western New York district is believed to be the first in the state to incorporate the technology in the aftermath of deadly mass school shootings that have led administrators nationwide to adopt security measures ranging from bulletproof glass to armed guards.

But even without the inclusion of students on the Lockport schools' "hot list," the New York Civil Liberties Union said facial recognition technology infringes on students' rights just by scanning their faces in search of a match.

"Because every face that is detected in the frame will be analyzed and compared to entries on the Hot List, anyone who walks through areas captured by the surveillance cameras will be entered into the facial recognition system, including students," the NYCLU wrote to Interim Education Commissioner Shannon Tahoe this week, seeking a halt to its use.

Education department officials said they believe Lockport has satisfied their concerns about student privacy and data, but have recommended that the district consult with its lawyers to ensure individuals' civil rights are protected.

Bradley said the system does not collect or store any personally identifiable or other information until a match is made and confirmed by school staff, who would receive an alert from the system.

The $1.4 million Canadian-made Aegis system was funded through a state technology bond.