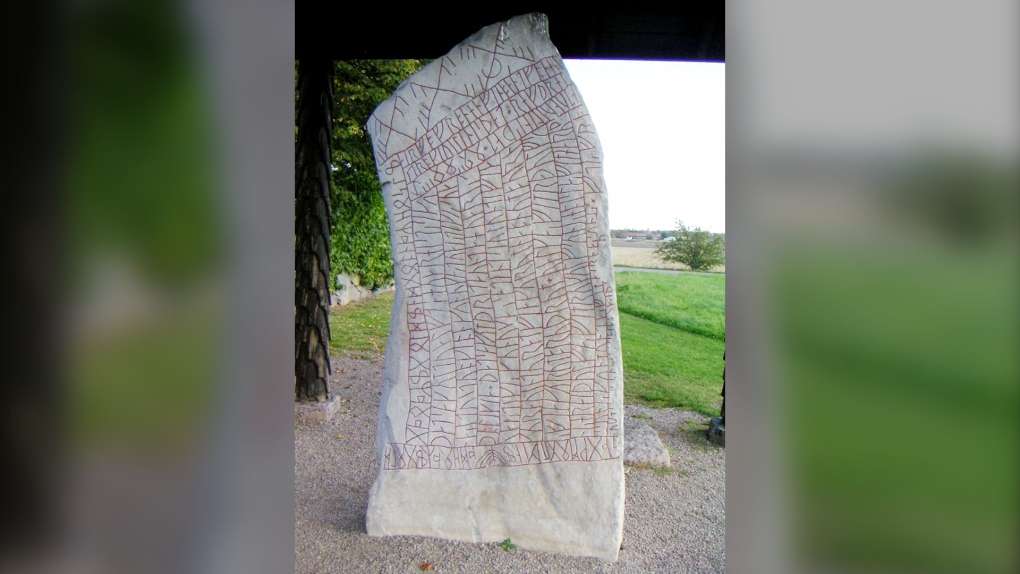 The Rok runestone in Sweden dates back to the Viking age and contains riddle-like messages that allude to Norse mythology covering its sides. (Bengt Olof Aradsson / Creative Commons)

A huge 9th-century stone monument in Sweden may have been erected by Vikings who feared a repeat of a cold climate crisis that took place more than 300 years earlier, according to a new study.

The Rok runestone is a 5-ton granite slab that stands over 2.5 metres tall. At 28 lines, it has the longest known runic inscription in stone, with riddle-like messages that allude to Norse mythology covering its sides. And despite its age, the more than 700 runes and other characters are still clearly legible, with the exception of one damaged line.

While scholars have generally agreed on how to read the inscriptions, the exact meaning of the runic characters and cryptic passages has been elusive -- until now.

A new interdisciplinary study by scholars from Swedish universities has concluded that the inscription is about anxiety triggered by a son's death and fears of a new cold climate crisis.

The study was based on archeological research on a cold climate catastrophe from the years 536 to 550, which affected Scandinavia. The crisis took hold after a series of volcanic events and led to lower average temperatures, crop failures, hunger and mass extinctions. It is also estimated that the population of the Scandinavian Peninsula fell by 50 per cent or more.

"The key to unlocking the inscription was the interdisciplinary approach. Without these collaborations between textual analysis, archeology, history of religions and runology, it would have been impossible to solve the riddles of the Rok runestone," Per Holmberg, professor in Swedish at the University of Gothenburg, who led the study, said in a news release.

The socio-economic situation of the region had recovered at the time of the carving of the Rok runestone, but the collective memory of the extreme cold climate event likely passed down through the generations, the study said.

"Before the Rok runestone was erected, a number of events occurred which must have seemed extremely ominous," said Bo Graslund, professor in archaeology at Uppsala University, one of the authors of the paper. "A powerful solar storm colored the sky in dramatic shades of red, crop yields suffered from an extremely cold summer, and later a solar eclipse occurred just after sunrise."

"Even one of these events would have been enough to raise fears of another 'Fimbulwinter,'" he said, referring to "The Great Winter" in Norse mythology, which would mark the the coming of Ragnarok -- a series of events that would lead to the end of civilization.