Report estimates 1 in 4 Canadians own a tablet computer 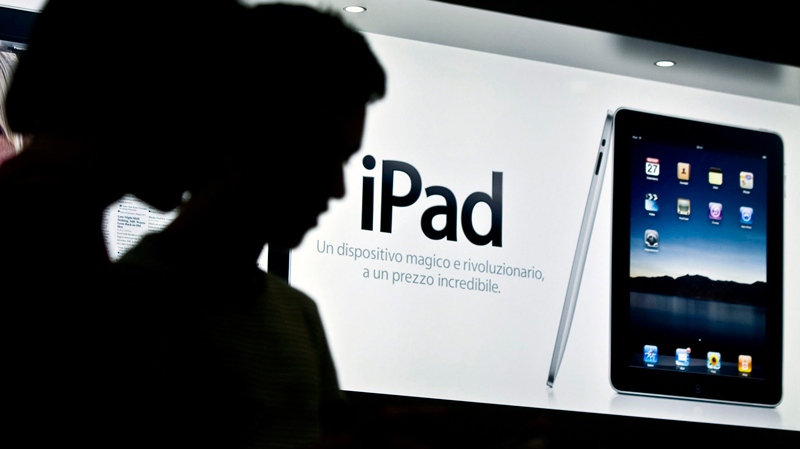 Customers are silhouetted at the launch of the new iPad tablet computer at an Apple store. (AP / Angelo Carconi)

TORONTO -- The iPad is still king, those addicted to their tablets read more news and watch more streaming video, and the popular gadgets are mostly used at home, even though they're often called "mobile" devices, says a new report that details how Canadians are adopting and using tablets.

According to the report by the Media Technology Monitor, a research product of the CBC, an estimated 26 per cent of the population had a tablet as of last fall. Tablet ownership had more than doubled in a year and was up from just five per cent in the spring of 2011.

Of the tablet owners, almost two-thirds had an iPad, while about 15 per cent each had purchased either a BlackBerry PlayBook or a Google Android device.

Owners of iPads were found to be the most enthusiastic about their purchase. While a vast majority of all tablet owners said they would definitely or probably recommend their device to family and friends (86 per cent), the numbers were even higher for those with an iPad, at 91 per cent. About 61 per cent of iPad owners said they would definitely recommend their tablet, compared to 44 per cent of other tablet owners.

Usage habits were very different for frequent tablet users, who were more likely to seek out news and multimedia content.

But for some, the novelty of having a tablet might be wearing off a bit.

According to a survey conducted in the spring of 2012, 32 per cent of tablet owners said they were using it several times a day. That figure was 49 per cent a year earlier.

Although tablets are often classified as mobile devices along with smartphones, the majority said they used the device at home most often. About 82 per cent used it most around the house, compared to just eight per cent at work, two per cent at school or while travelling, and one per cent either in a coffee shop or restaurant, in the car, or on public transit.

The Media Technology Monitor conducts regular surveys with thousands of Canadians to follow tech trends and changes in consumer behaviours.