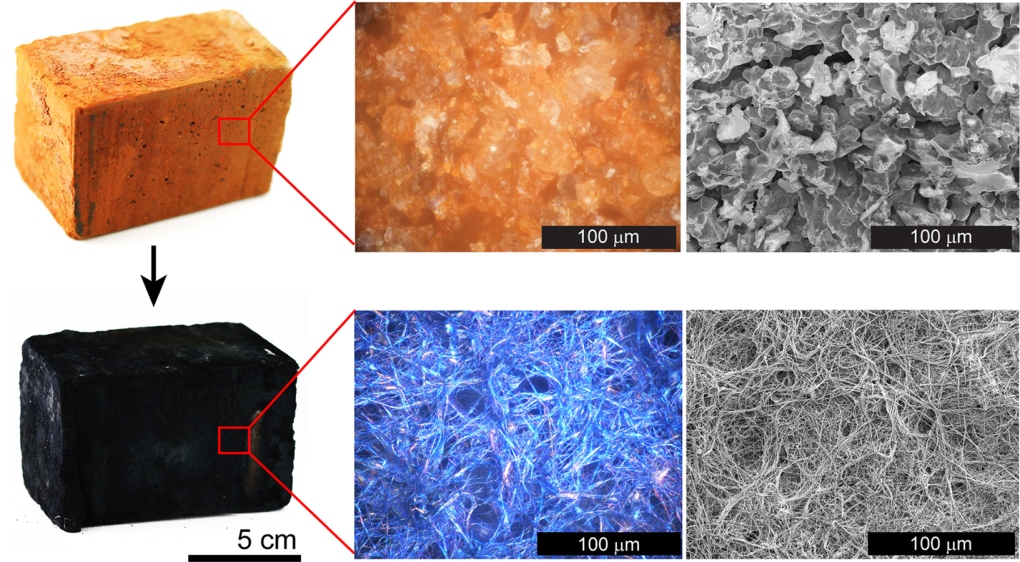 The bricks that make up the walls of a house could someday be a green energy solution. (The D'Arcy Laboratory in Washington University in St. Louis)

Whether humans were erecting Neolithic dwellings, ranch-style homes or modern McMansions, bricks have been a favorite of builders for thousands of years.

Now, chemists have discovered new potential in these ubiquitous building blocks: Through a series of reactions, scientists have shown that conventional bricks can be transformed into energy storage devices powerful enough to turn on LED lights.

The findings were published Tuesday in the scientific journal Nature Communications.

While scientists caution that much more development is needed before these "smart bricks" are commercially available, they say the proof of concept holds promise that could one day turn the walls of a home into a battery to store renewable energy.

"What we have demonstrated in our paper is sufficient enough for you to light up emergency lighting that's in a hallway or sensors that could be embedded inside the walls of a house," said Julio M. D'Arcy, an assistant professor of chemistry at Washington University in St. Louis, Missouri, and one of the study's authors.

"The next step is trying to store more energy, so that you can power bigger devices -- like maybe a laptop -- directly from the walls of the house."

Bricks have been prized by architects for their aesthetic appeal and capacity to store heat, but using them to hold electricity has never been tried before, D'Arcy said.

To unleash their energy storage potential, the researchers said they capitalized on bricks' natural structure.

"We took advantage of what bricks offer, and what they offer is a porous network and a very strong material," D'Arcy said.

To allow the bricks to store electricity, the researchers pumped a series of gases through the maze of pores inside the brick. The gases react with the brick's chemical components, coating them with a web of plastic nanofiber known as a PEDOT, which is a good conductor of electricity, he said.

The process turned the bricks from their normal red hue to a dark shade of blue.

Though they are similar to batteries, D'Arcy said the "smart bricks" his team created are technically supercapacitors, which differ from batteries in a few key ways.

Though they can store large amounts of energy, supercapacitors cannot hold onto that charge or deliver sustained energy over long periods of time like batteries can.

Still, scientists see potential in the bricks as a possible green energy solution.

Whether it's massive "farms" of solar panels or home rooftop installations, solar power continues to grow rapidly as an affordable and clean energy source. But storing the power from the sun when it's not shining is one of its challenges.

Right now, these "smart bricks" cannot compete with the energy storage potential of the lithium-ion batteries used in many solar power systems. However, there is optimism that this new technology could be developed to provide a new storage method using readily available materials.

"This study shows that there is potential to store electrical energy as well," said Dan Brett, a professor of electrochemical engineering at University College London, who was not involved in the study.

"The performance is a long way short of bespoke (custom) supercapacitors, but the principle is proven and there is significant scope for improving the storage characteristics by optimizing the structure and chemistry of the bricks."