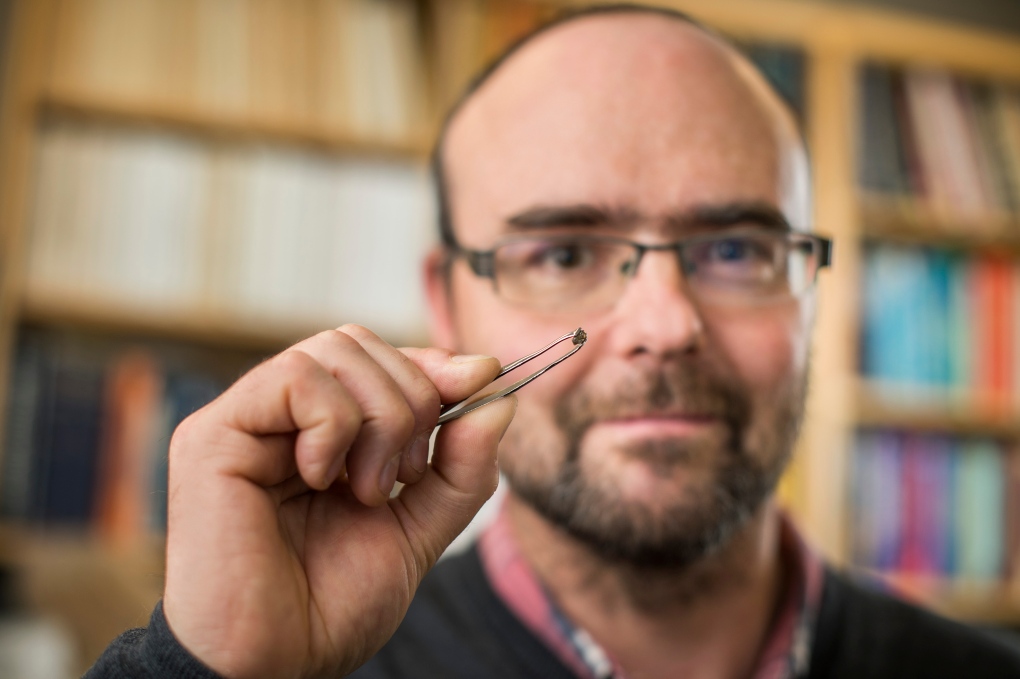 EDMONTON -- Jules Verne was on to something.

In his classic 1864 adventure story "Journey to the Centre of Earth," the French novelist imagined a vast ocean deep within the planet's bowels. University of Alberta scientists have found the first direct evidence that he wasn't far off.

"The original idea is a Jules Verne idea, isn't it?" laughs geologist Graham Pearson. "One hundred years later it turns out to be pretty much true -- except you can't really stand around and see the water."

In a paper published in the journal Nature, Pearson and his co-authors describe how a Brazilian diamond originating at least 400 kilometres down has yielded the only surface sample ever found of a deep-Earth mineral and provides the first concrete proof for a long-held theory about how the planet works.

"We found it by accident," Pearson says. "It was really a bit of blue-sky research."

Pearson's lab studies diamonds. One of its scientists was trying to date a stone from a region of Brazil where the gems are known to have originated in a so-called transition zone between the Earth's upper and lower mantle, between 400 and 600 kilometres deep.

The researcher found a mineral inside the diamond, but couldn't identify it. He was about to move on when one of his colleagues walked in and realized it was ringwoodite.

"That was a eureka moment."

Ringwoodite, thought to be one of the main constituents of the Earth's mantle, is only stable at pressures deep underground equivalent to 150,000 times surface atmospheric pressure. The only previous examples of it came from meteorites and the bit in Pearson's lab -- 40 millionths of a metre long -- is the first found at the Earth's surface.

"The beauty is it's trapped in diamond," Pearson says.

"The diamond is this amazing material that can withstand huge, intense internal pressures. The diamond is such a strong host it doesn't allow the ringwoodite to expand."

Once the scientists realized what they had, they knew they had a golden opportunity to test a theory about water in the deep underground. 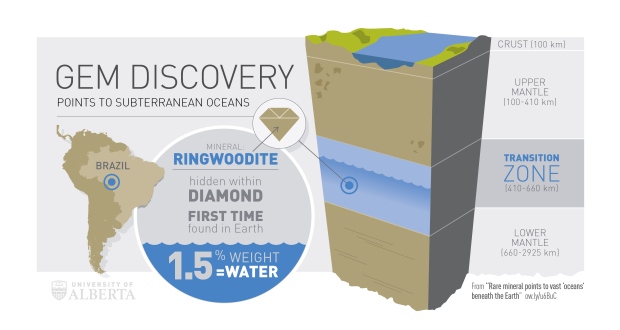 Researchers have long suggested that minerals such as ringwoodite have the ability to store water molecules locked within their crystal structure. Pearson and his colleagues, for the first time ever, had a chance to look inside an actual sample.

Sure enough, their tiny chip of ringwoodite was about one per cent water by weight. Over the uncountable millions of tonnes of ringwoodite in the Earth's mantle, it adds up -- and makes a big difference.

Thermal spikes from even deeper underground can "torch off" water from transition-zone rocks, says Pearson. Scientists theorize such releases of water can destabilize upper layers, sometimes resulting in volcanoes on the surface.

"Water exerts a huge influence on the strength of rocks and their melting temperatures. It can remove very large thicknesses of the plate beneath continents.

"Water's the reason that the interior of the Earth flows so well and it's also the reason why we see a lot of melting of the deep Earth evident at the Earth's surface -- volcanoes."

Pearson says the finding confirms a generation of theorizing and mathematical models, and opens up new ways of understanding Earth's geology. It's also, he says, a good example of how science really works.

"It's an example of why you can't just do applied science all the time," he says.

"A lot of really fundamental discoveries are made by accident, but you've got to be doing the science in the first place. It stifles innovation if all you do is applied science."