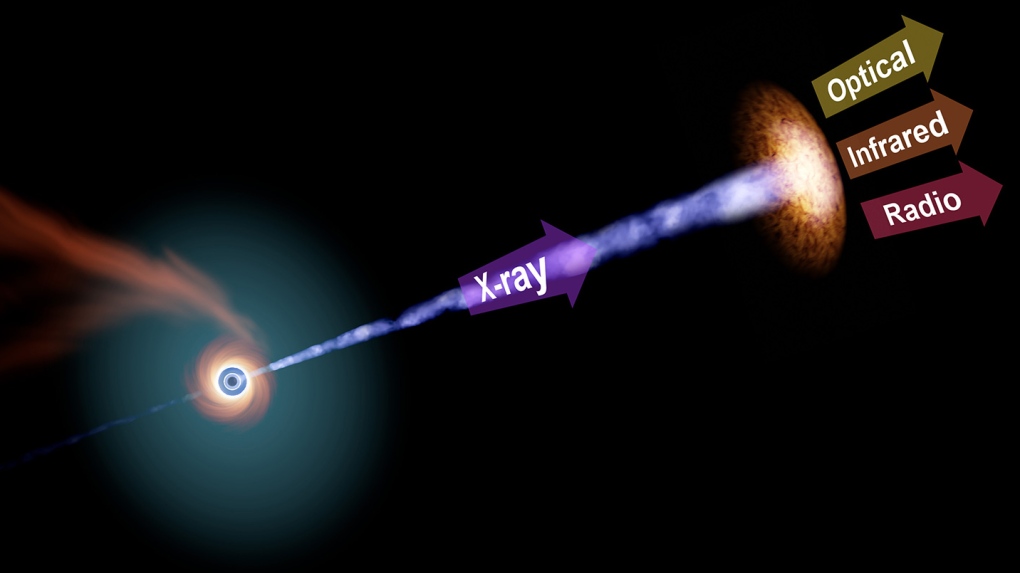 But the rare cosmic event actually occurred 8.5 billion light years away from Earth, when the universe was just a third of its current age — and it has created more questions than answers.

The signal from the luminous explosion, known as AT 2022cmc, was first picked up by the Zwicky Transient Facility at the California Institute of Technology's Palomar Observatory on February 11.

When a star is torn apart by a black hole's gravitational tidal forces, it's known as a tidal disruption event. Astronomers have observed such violent events before, but AT 2022cmc is brighter than any previously discovered. It's also the most distant ever observed.

Astronomers believe that when the black hole gobbled up the star, it released a massive amount of energy and sent a jet of material streaking across space at near the speed of light.

It's likely that AT 2022cmc appeared so bright in our sky because the jet was pointed directly toward Earth, creating what's known as a "Doppler-boosting" effect.

The discovery could reveal more about the growth of supermassive black holes, as well as how they snack on stars. Two separate studies detailing the event were published in the journals Nature Astronomy and Nature on Wednesday.

"Gamma-ray bursts are the usual suspects for events like this," said the Nature Astronomy study's coauthor Dr. Benjamin Gompertz, who led the gamma-ray burst comparison analysis for the paper, in a statement.

"However, as bright as they are, there is only so much light a collapsing star can produce. Because AT 2022cmc was so bright and lasted so long, we knew that something truly gargantuan must be powering it — a supermassive black hole," said Gompertz, an assistant professor at the University of Birmingham in the United Kingdom.

Astronomers used the Neutron star Interior Composition ExploreR, or NICER, an X-ray telescope on the International Space Station, to analyze the signal.

The researchers determined AT 2022cmc was "100 times more powerful than the most powerful gamma-ray burst afterglow" previously recorded, according to Dheeraj Pasham, lead study author of the Nature Astronomy paper and a research scientist at the Massachusetts Institute of Technology's Kavli Institute for Astrophysics and Space Research.

First, the star was ripped to shreds, then pieces of it were pulled into the spinning disk orbiting the black hole's point of no return.

The extreme X-rays released by the event were created when the shredded star spun up a swirling whirpool of debris as it fell into the black hole.

The Zwicky Transient Facility is one of the largest used to study the universe and spy unusual cosmic events.

After it first detected the signal, several dozen other ground and space-based telescopes focused in on AT 2022cmc, providing an incredibly detailed look at the rare event.

The European Southern Observatory's Very Large Telescope in Chile helped determine its distance from Earth, while the Hubble Space Telescope captured the infrared and visible light released by the event. The Karl G. Jansky Very Large Array of telescopes in New Mexico picked up radio waves.

Only about 1% of tidal disruption events result in relativistic jets (or beams moving at close to the speed of light) that launch plasma and radiation from the poles of a rotating black hole.

"The last time scientists discovered one of these jets was well over a decade ago," said Michael Coughlin, an assistant professor of astronomy at the University of Minnesota Twin Cities and co-lead study author of the Nature paper, in a statement.

Astronomers still don't understand why some tidal disruption events create these jets, while others don't — but it's possible that the black hole needs to be spinning particularly rapidly to create a jet in the first place.

Observing more events like this could reveal how black holes launch such powerful jets across space, according to the researchers.

"Astronomy is changing rapidly," said Igor Andreoni, a postdoctoral associate in the department of astronomy at the University of Maryland, College Park, and co-lead study author of the Nature paper, in a statement. "Scientists can use AT 2022cmc as a model for what to look for and find more disruptive events from distant black holes."