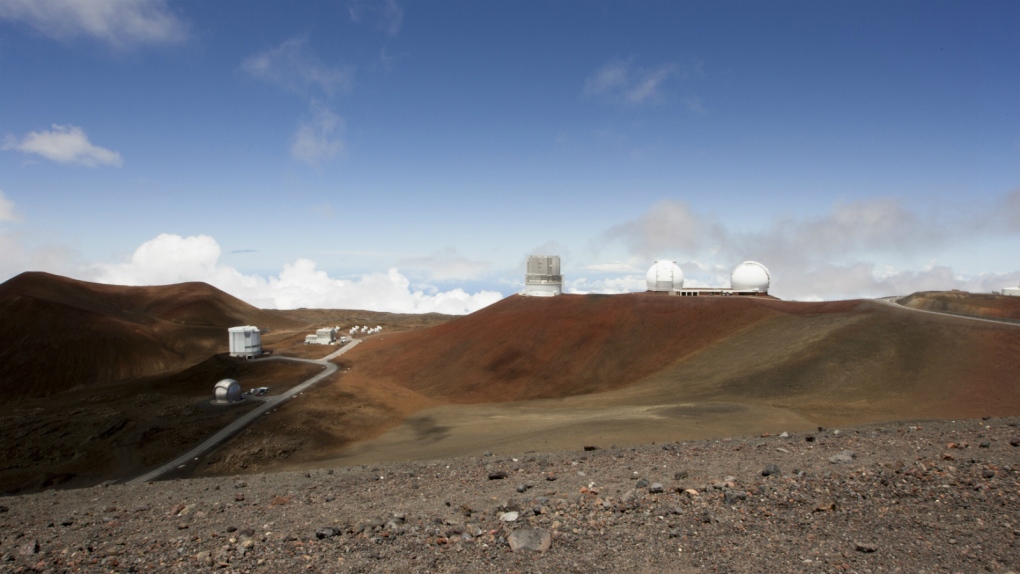 Telescopes on the summit of Mauna Kea on Hawaii's Big Island are shown on Aug. 31, 2015. Protesters against the construction of the telescopes say they will stop an overnight vigil of the work site. (AP / Caleb Jones)

HONOLULU - Protesters against building a giant telescope atop a Hawaiian mountain say they will no longer keep an around-the-clock vigil on Mauna Kea.

They reached an agreement with the state to take down a large tent where people have been sleeping in an attempt to block construction workers from accessing the site for the planned $1.4 billion Thirty Meter Telecope. The state announced the agreement Thursday.

"Our purpose for the 24/7 vigil was originally intended because at the beginning of this, there was no telling when construction workers would come," said Lanakila Mangauil, one of the protest leaders.

There's no longer any need to stay overnight on the mountain because protesters will trust the state to warn them when the non-profit company building the telescope plans to resume construction, Mangauil said.

"We've achieved our goal of being able to protect the mountain," he said of the two instances when construction crews retreated after encountering protesters.

Construction has been stalled since April, when dozens of protesters were arrested for blocking crews from accessing the telescope site.

"We have not yet determined a date for when construction will resume," TMT International Observatory Board member Michael Bolte said in a statement. "TMT will continue to work co-operatively with all parties involved as it considers its eventual restart."

Taking down the tent doesn't mean they're giving up, Mangauil said. "At this point, it's a matter of conserving resources," he said of the food, equipment and time needed to camp on the mountain, especially as temperatures are stopping to drop.

Protesters will continue to have a presence on the mountain during the day, he said.