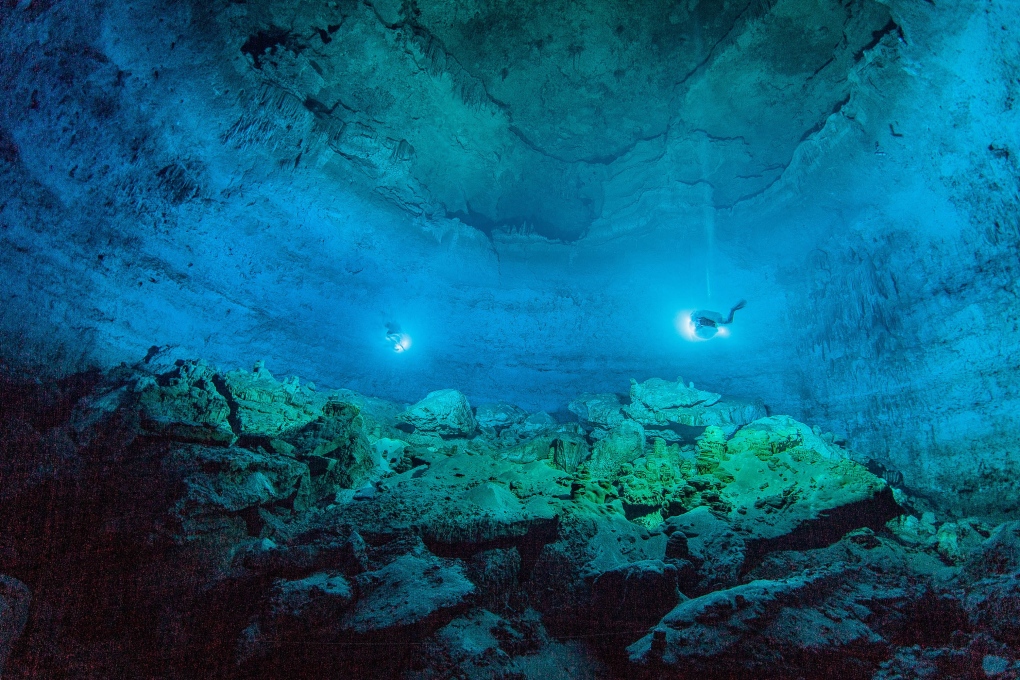 In this Oct. 25, 2013 photo, divers illuminate Hoyo Negro, an underwater cave in Mexico's Yucatan Peninsula where the remains of 'Naia,' were found. (AP Photo/Roberto Chavez Arce via Science)

TORONTO -- The pristine skeleton of a teenaged girl who lived about 13,000 years ago, discovered in a deep, water-filled underground cavern in the sprawling cave system in Mexico's Yucatan Peninsula, is providing archeologists with an unprecedented glimpse into the history of the early inhabitants of the Americas.

Given the name Naia, Greek for "water nymph," the remains of the 15- or 16-year-old girl were found at the bottom of the boulder-strewn, underwater chamber dubbed Hoyo Negro -- "black hole" in Spanish -- along with the scattered bones of 26 large animal species, among them sabre-tooth tigers, giant ground sloths and cave bears.

"Sealed off by water and darkness for over 8,000 years, it is a time capsule of the environment and human life in central America at the end of the Ice Age, when glaciers across the globe trapped massive amounts of water as ice and sea level was far lower than it is today," said American paleontologist Jim Chatters, head of an international research team investigating the site and its archeological treasures.

Chatters, the first scientist to study the prehistoric skeleton known as Kennewick Man that was found in Washington state in 1996, described Hoyo Negro as being like a miniature of California's La Brea tar pits, "only without the tar and with considerably better preservation."

At the time of Naia's death, the caves would have been dry and accessible, he told a media teleconference. "Perhaps seeking fresh water in the dark passages, animals and at least one human fell into this inescapable ... trap."

Naia's remains were discovered in 2007 by three Mexican cave divers exploring an underwater cavern, deep in the Yucatan jungle about eight kilometres from the Caribbean coast. In a 50-metre-deep sinkhole within the cavern, the girl's skull was resting on a boulder, "laying upside-down with a perfect set of teeth and dark eye sockets looking back at us," said diver Alberto Nava.

After the divers reported their find to the National Institute of Anthropology and History in Mexico, a consortium of 16 scientists and cave explorers from Mexico, the U.S. and Canada was formed in 2011 to photograph and document the site, and to collect fossilized flora and fauna samples for testing.

"A big part of it has just been trying to map the locations of things and get the shape of the tunnels and cavern, and mapping locations of human bones and animal bones," said Ed Reinhardt, a professor of geography and earth sciences at McMaster University in Hamilton who is part of the research team. His role is studying microfossils, such as those of single-celled animals, and water salinity, within Hoyo Negro.

But beyond the stunning discovery of Naia's skeletal remains in her watery grave, reported Thursday in the journal Science, is what DNA from her bones is telling researchers about the origins of the Western Hemisphere's first peoples and their link to modern-day native Americans.

Based on carbon-dating and other chronology testing, the researchers estimate "the small, slight" girl lived between 12,000 and 13,000 years ago.

DNA was extracted from one of Naia's teeth and scientists sequenced what's called mitochondrial DNA, which is passed from mother to child.

The results show the girl is related, maternally at least, to today's native Americans, meaning both would trace their lineage to Beringia -- the land masses on either side of the ancient land bridge now covered by the Bering Sea that was used by prehistoric people to migrate from northeast Asia into what is now Alaska and southward into Central and South America. Those first migrants have been dubbed the Clovis people.

Whether all early inhabitants of the Americas came across the Bering land bridge or somehow migrated from elsewhere in the world remains a controversial question because of the differences in skull shape and facial features among prehistoric fossilized remains discovered across the Americas and modern-day indigenous populations.

Naia's skull shape and facial features are considered "Paleoamerican" and differ from native Americans living today in the Western Hemisphere.

"Because she exhibits the distinctive Paleoamerican skull and facial features, the study shows for the first time that Paleoamericans with these distinctive features can have Beringian ancestry," said Deborah Bolnick, a genomic anthropologist at the University of Texas at Austin.

Bolnick said the physical differences between them are likely due to evolutionary changes that occurred either in Beringia or in the Americas over the last 9,000 years, rather than the two groups having separate origins.

"Mitochondrial DNA for this individual does not exclude the possibility of separate ancestry for some Paleoamericans, but our results provide no evidence for an early migration to the Americas from other regions of the world -- southeast Asia, Australia or Europe -- as some have proposed," she said.

"Instead, our results suggest that Paleoamericans and contemporary native Americans both have Beringian ancestry."

Reinhardt of McMaster said Hoyo Negro, which is now off-limits to the public because unauthorized divers have disturbed the artifacts, said the cathedral-like site is breathtakingly beautiful, with crystal-clear water surrounded by white limestone walls.

But for Naia, who may have been seeking fresh water in the cavern and accidentally plunged into the sinkhole and could find no escape, it must have been a terrifying experience, he said.

"When we're diving the site, it's spectacular, but the reality is this pit was a bit of a house of horrors in the sense that you would drop and perhaps survive the fall but not have any light. You wouldn't know the extent of the cavern. You'd be in a pool of water (at the bottom), kind of thrashing around trying to get out.

"Yeah, it would have been a pretty awful way to die for sure."