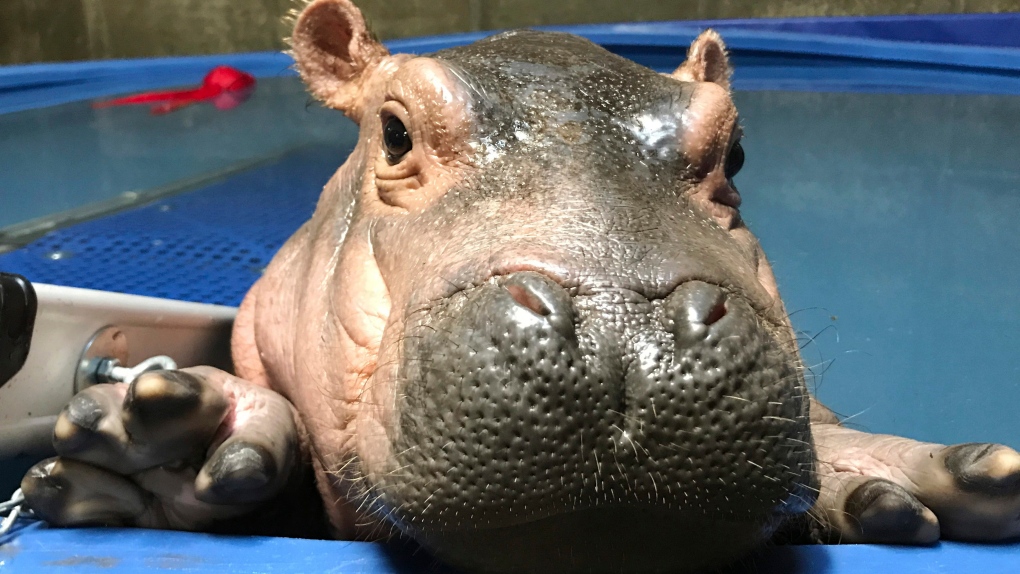 CINCINNATI (AP) -- A prematurely born hippo in Ohio has been providing regular doses of happiness for animal lovers, in a show of public affection that's also given an emotional lift to Cincinnati Zoo workers.

After months of backlash over the zoo's fatal shooting of Harambe, a gorilla who became a pop culture phenomenon in death, baby Fiona is the new center of attention there.

"She has brought everyone together," said Jenna Wingate, one of Fiona's caregivers. "It brings us to tears sometimes."

Blog and video updates such as Fiona taking a bottle, splashing in a pool or learning to run have drawn tens of millions of online views. Tens of thousands of people have bought Team Fiona T-shirts, and thousands more have eaten a Cincinnati bakery chain's Fiona-themed treats, with proceeds supporting the zoo's efforts. She gets so many cards and letters that she has her own mail bin.

On a recent sunny afternoon at the zoo, Gina Brockman, of Taylor Mill, Kentucky, got her children in place for a photo near the hippopotamus area and just before snapping it, said: "Say Fiona!"

"They can't wait to see her," Brockman said. "I think she has brought everybody lots of excitement."

Zoo officials say zoos are increasingly using newer media to interest the public, such as the recent livestream of April the giraffe giving birth in New York's Animal Adventure Park.

Zoos "are utilizing new ways to give the public a firsthand account of caring for the animals at their facilities," said Rob Vernon, spokesman for the Association of Zoos & Aquariums, based in Silver Spring, Maryland. "Fiona is a great example of using social and traditional media to tell her story."

Some animal rights activists are skeptical.

"Basically, it's a marketing tool," said Michael Budkie, who leads the Cincinnati-area group Stop Animal Exploitation Now! "They focus so much attention on baby animals because people like to see them. What happens to these animals when they're grown?"

Budkie, who said animals should be in natural habitats, not "gawked at by human beings," was among many who criticized the zoo after the May 28, 2016, shooting of Harambe by a zoo special response team to protect a 3-year-old boy who fell into the gorilla enclosure's moat. Harambe's death was mourned and satirized in a social media response that swept the globe.

The Cincinnati Zoo shut down its Twitter account for two months last year after hacks and waves of negative comments.

The strong positive response to Fiona has helped what the zoo's director has described as a healing process after Harambe.

"It's been a very welcome thing," Wingate said.

But there was no guarantee that Fiona's story would be a happy one. Born Jan. 24, six weeks early, the calf was 29 pounds, well below the normal birth weight of 55 pounds to 120 pounds. The first Nile hippo born there in 75 years was unable to stand or to nurse, so zookeepers, vets and volunteers began raising her with 24-hour attention.

"We weren't expecting this premature hippo to survive," said Wingate.

She got advice from the Thula Thula Rhino Orphanage in South Africa, which raises baby rhinos whose mothers are killed by poachers. Wingate said they advised keeping the baby hippo warm and moist, and getting her into the pool as much as possible.

Some of the early updates were about setbacks; one day she wasn't gaining weight, another she wouldn't take the bottle.

Zoo spokeswoman Michelle Curley said the policy is to be transparent, sharing bad news as well as good.

"You'd have these awesome days with her then you have a couple bad days," Wingate said. "You try to keep yourself guarded. But she's doing well now. Something could still happen, but we're not as stressed now."

The zoo workers have been increasing Fiona's contact with her parents, and they plan to slowly get her ready for in-person viewing by her fans. That likely will come in May, around the time of the one-year anniversary of Harambe's death.

"We've had the spotlight on us for almost a year," Curley said. "It's nice for it to be for positive reasons now."