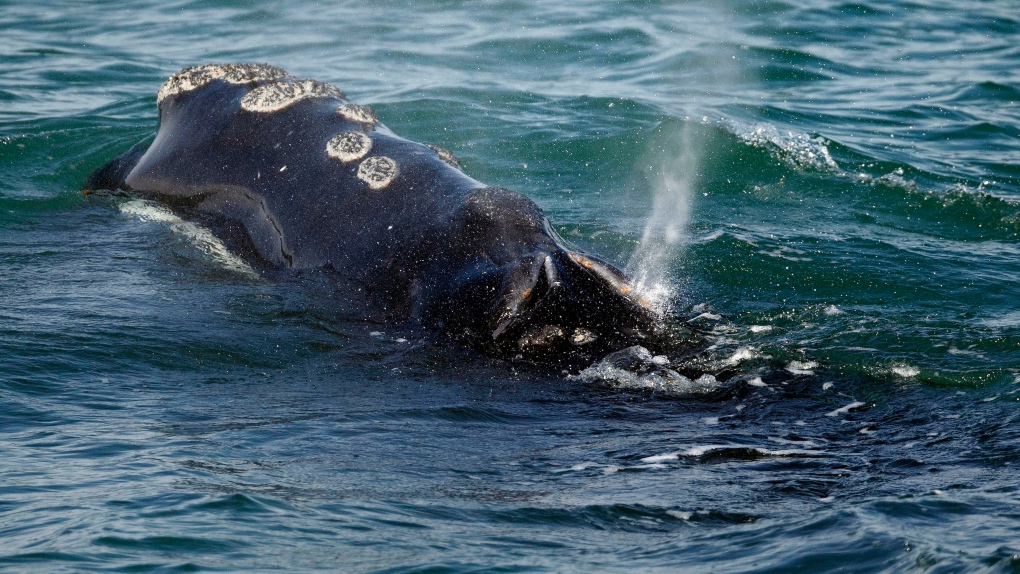 In this March 28, 2018, file photo, a North Atlantic right whale feeds on the surface of Cape Cod bay off the coast of Plymouth, Mass. Six of the endangered right whales died in the Gulf of St. Lawrence in June 2019, prompting scientists and conservationists to call for a swift response to protect the endangered species. (AP Photo/Michael Dwyer, File)

Search and rescue efforts for three endangered North Atlantic right whales that were found entangled in ropes were foiled on Wednesday because of poor weather conditions.

The Department of Fisheries and Oceans said in a news release that it hopes to resume at-sea and aerial surveillance Thursday morning.

"While poor weather conditions have caused difficulties in our search efforts since these right whales were first reported, DFO and partners remain committed to taking all possible steps to re-locate these whales and initiate disentanglement efforts if/when it is safe to do so," it said.

Last week, three whales were found entangled in ropes. One of them spotted by the Canadian Coast Guard east of Miscou, N.B. with a rope around its tail and thought to be dragging something heavy.

The two others were seen in other locations -- one east of Gaspe, Que., and another east of Miscou.

All three entangled whales were spotted in areas already closed to fishing, the department said.

Late Tuesday evening, the National Oceanic and Atmospheric Agency located a right whale known as number 4440 during an aerial surveillance flight, it said in the release.

The department worked with NOAA and Campobello Whale Rescue team to reach the whale to install a satellite tag on it but were unsuccessful.

Martin Haulena, head veterinarian at the Vancouver Aquarium Marine Science Centre, said while disentanglement techniques have been quite successful if they can get to the whales, they are rather difficult.

"As you can see it's very complicated, very weather dependent, very dependent on reliably being able to site whales, whether whales are in an area where they can be approached by boats, " he said. "So yeah it's quite a complicated procedure and unfortunately very, very dangerous."

The department acknowledged that locating these three whales is a challenging task.

Right whales spend a significant amount of time swimming under water, making it difficult to observe them from the air, it said in the statement.

"To add to the challenge, an entangled whale can often still swim with gear attached to it and can therefore change position frequently after being sighted," it said.

Haulena said the rescue efforts combined with the measures "certainly can't hurt," but added he worries "there's just too few of these guys to recover and still so many dangers left. So it's hard to tell."

"Certainly everything is going in the right direction as far as regulations go, yet it's very difficult to know whether it's enough."

A federal study says measures taken to protect these whales from being struck by ships and getting caught in fishing gear may not be doing enough to prevent more of them from being hurt or killed in Atlantic Canada.

Haulena said the right whale is one of the most endangered populations of baleen whales anywhere in the world.

Six whales have died in Canadian waters in the last several weeks with necropsies showing three of the deaths were due to vessel strikes.

Transport Canada and Fisheries and Oceans Canada have implemented several measures to protect these animals, including increasing surveillance, expanding slowdown zones and changing the rules that trigger fishing shutdowns.

The whales number only about 400.

"That population is in trouble largely due to human causes," Haulena said. "So entanglement and boat strike are probably the two biggest threats both of those directly caused by people."

A study published in the journal Diseases of Aquatic Animals last month looked at the causes of 70 whale deaths between 2003 and 2018.

"It's not a good time to be a marine mammal unfortunately," Haulena said.