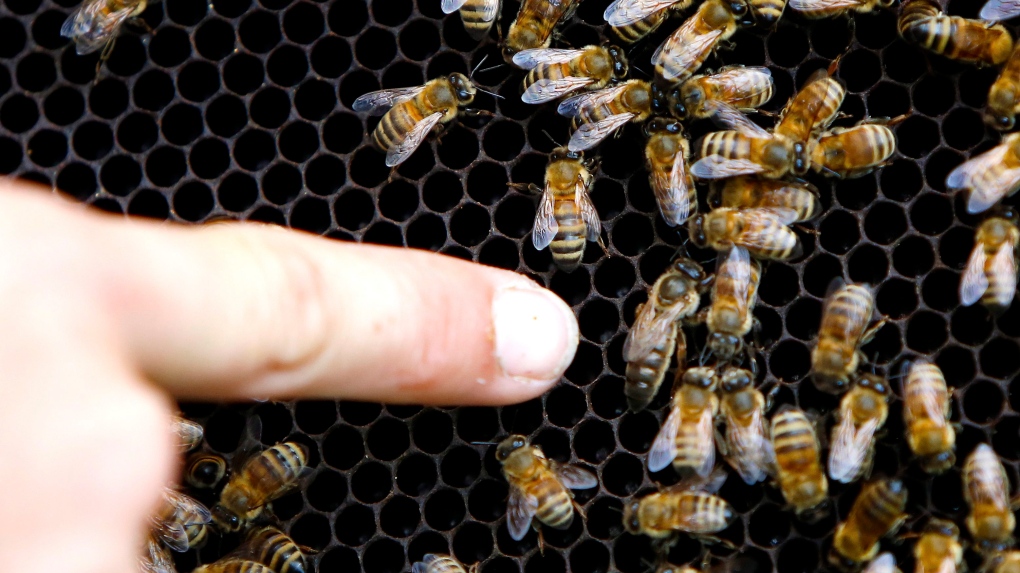 In this Friday, July 5, 2019, photo Danyelle Barreda, a bee keepers with Straughn Farms, points to a queen honey bees, the one with the larger abdomen, as she checks a honey bee hive at a farm near Waldo, Fla. New research looking into ground-nesting bees show they could be exposed to lethal amounts of insecticide. (Brad McClenny/The Gainesville Sun via AP)

New research suggests ground-nesting bees may be exposed to lethal levels of pervasive insecticides found in soil on farms across southern Ontario.

University of Guelph environmental sciences professor Nigel Raine and PhD student Susan Chan examined the hoary squash bee that feeds on the nectar and pollen of squash, pumpkin, gourds and melon, and is a crucial pollinator for those crops.

They estimated 36 per cent of the bee population studied encountered lethal doses of one major neonicotinoid -- clothianidin -- in the soil at 18 commercial squash fields in a region stretching from Peterborough, Ont., to the tip of southwestern Ontario.

"It's very concerning," Raine said. "This is a major exposure risk. This is starting point to look at a real route of exposure and source of concern for non-honeybee bees."

The team's results were published last week in the journal Scientific Reports and funded by Ontario's agriculture and environment ministries, as well as a federal grant.

Neonic pesticides are used all over the world, but their use has come into question because of growing research on the effect they have on pollinators.

Europe has imposed a moratorium on neonics and the U.S. has banned new uses for them.

Health Canada is currently reviewing neonics and has said it will provide measures to protect pollinators by the end of the year. It has also proposed new restrictions that include banning neonics from being sprayed on orchards and turf sites, and reducing their use on vegetables.

Much of the previous research on the deleterious effects of neonics has focused on honeybees, which nest in colonies away from soil.

Large doses of neonics in laboratory settings led to paralysis and death in honeybees by blocking signal transmission between neurons in the brain. Honeybees exposed to neonicotinoids take longer foraging trips as they age, suggesting they are unhealthy, can't fly as fast or have a hard time remembering how to fly home, research has shown.

Research has also indicated neonics have led to death and reproductive problems among smaller birds, and high levels of the insecticides have made their way into nearby water systems because they are highly soluble.

But scientists have not really examined the risks faced by bees who nest in the ground, Raine said. Those bees make up the majority of more than 400 bee species found in Ontario, and most of the 900 types of bees found across the country, he said.

Hoary squash bees, like the ones examined in his study, live solitary lives where females dig out a series of tunnels and chambers in the ground, usually near their food source, and sleep there at night. The bees put nectar and pollen on a pad inside a chamber, then lay an egg on top and seal up the chamber, Raine explained.

Larvae then feed on that until the ground becomes warm enough the following spring to leave. Females will do the same thing as their mothers while males tend to spend less time in soil once they leave the nests, hanging out near the crops and sleeping inside the flowers.

The Guelph researchers examined the nectar and pollen of Cucurbita crops, which include pumpkin, squash and gourd plants, along with the soil they grow from, Raine explained.

"We found the most pesticides in the soil," Raine said.

Neonic insecticides are either found as a coating on the seeds of crops, or sprayed into the soil just before seed planting, or sprayed on young plants. The insecticide is taken up by the plant and distributed through its tissue as it grows.

"We know that farmers are in a tricky situation, particularly pumpkin and squash farmers, because without the movement of pollen from the male flowers to female, you don't have pumpkins, you don't have zucchini," Raine said.

"But you're also trying to control cucumber beetles, which can destroy crops. We need to think about alternative avenues for sustainable crop production."