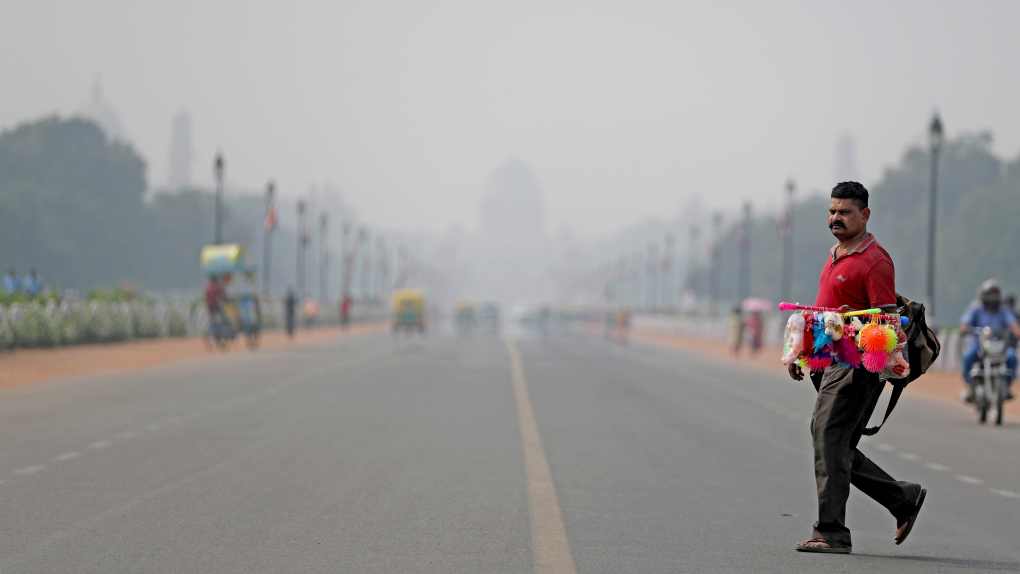 India's Presidential Palace, in the backdrop, is covered with smog as as a roadside vendor crosses Rajapth, the ceremonial boulevard in New Delhi, India, Wednesday, Oct. 16, 2019. (AP Photo/Altaf Qadri)

India is home to the world's 14 most polluted cities, with New Delhi the sixth-worst. A sharp increase in vehicle and industrial emissions, pollutants released from holiday firecrackers and dust from building sites increases pollution in the city of more than 20 million people during the onset of winters, exacerbating what is already a public health crisis.

In a bid to deal with the pollution, the government on Tuesday said it was instituting measures meant to discourage private vehicles on roads, increase bus and metro services and stop the use of diesel generators.

While many factors contribute to the severe air pollution in New Delhi, researchers say crop burning in neighbouring states is responsible for almost 10% of the city's pollution.

October is the time of year when farmers in the neighbouring states of Haryana, Punjab and nearby bordering regions set fire to their post-harvest fields that need clearing for the next crop season, despite there being a ban on it.

Smoke from these states travels to New Delhi, leading to a surge in pollution levels.

Punjab alone generates almost 20 million tons of crop waste every year, three-quarters of which is then burned. A cheap and effective method of clearing the land, the burning has the benefit of killing pests that eat crops and it converts the residue into fertilizing ash. But the smoke it emits can cause respiratory illnesses.

On a recent evening in Punjab's Amritsar city, farmers were burning the crop waste and flaming carpets of golden residue belched white smoke into the sky along vast paddy fields.

Farmers continue to defy the ban in part due to a lack of financial incentives. Efforts by the government to curb the practice have also met with very little success.

"I agree that burning the stubble is not the right thing to do but what else can the poor farmers do?" said Ravi Kahlo, a farmer.

The burning takes place twice a year after the harvest of wheat in April and May and of rice in October and November. It is only during the latter season when Delhi's air quality deteriorates because of specific meteorological conditions.

Satellite images recorded scores of farm fires across Punjab and Haryana on Tuesday.

Researchers say crop burning is responsible for almost 10% of the pollution in New Delhi.

The Punjab government has launched mobile applications aimed at checking crop residue burning, promised to provide modern farm equipment to the state's farmers with a subsidy, and implemented stringent laws to achieve the task of zero crop burning.