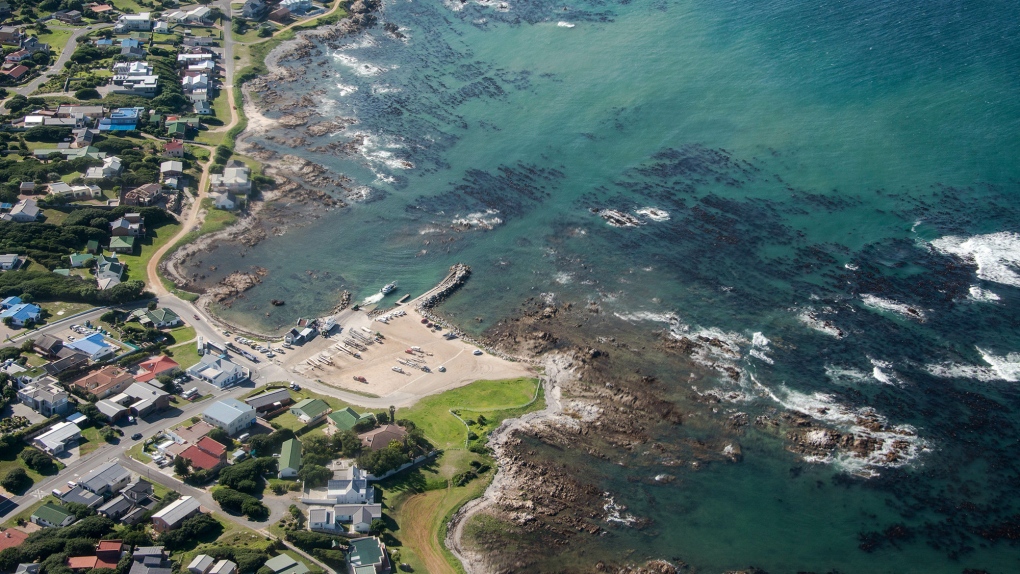 A pair of orcas have driven great white sharks away from a stretch of South African coast after killing five sharks over just a few months in 2017, according to a new study. (Adobe Stock/CNN)

A pair of orcas drove great white sharks away from a stretch of South African coast after killing five sharks over just a few months in 2017, according to a new study.

Great whites used to dominate areas of the Gansbaai coast, around 100 kilometres (62 miles) east of Cape Town, but have been avoiding them in recent years, according to a paper published in the African Journal of Marine Science on Wednesday.

The Gansbaai coast was once a popular spot for great white shark spotting, but sightings have decreased markedly in recent years. The study used long-term sightings and tagging data to demonstrate that great whites have been driven away by the orcas, sometimes known as killer whales.

Researchers also analyzed five great white shark carcasses been found washed up on the shore, four with their nutrient-rich livers removed and one with its heart taken out as well. They all had wounds made by the same pair of orcas, which have likely killed more great whites, say researchers.

The study tracked 14 great whites over five and a half years, and found they fled the area when the orcas were there. The researchers believe that the sharks' sense of fear sets off a fast, long-term mass migration when they know the predator is present.

Towner believes this is "large-scale avoidance," similar to how wild dogs in the Serengeti avoid certain areas when lions are present.

"The more the orcas frequent these sites, the longer the great white sharks stay away," she added.

Before the orcas started attacking great whites, the sharks had only been absent from Gansbaai for one week in 2007 and three weeks in 2016.

This means the extended absences witnessed by researches are unprecedented, and it's changing the ecosystem in the area.

"These bronze whalers are also being attacked by the orcas too, who are indicating a level of experience and skill in hunting large sharks," said Towner, who added that cape fur seals are now preying on African penguins, which are endangered.

"That's a top-down impact, we also have 'bottom up' trophic pressures from extensive removal of abalone, which graze the kelp forests these species are all connected through," she added.

"To put it simply, although this is a hypothesis for now, there is only so much pressure an ecosystem can take, and the impacts of orcas removing sharks, are likely far wider-reaching."

Towner also believes that orcas are increasingly prevalent off the coast of South Africa, and this particular pair might be part of a rare group of shark eaters.

"This change in both top predators' behavior could be related to a decline in prey populations, including fishes and sharks, causing changes in their distribution pattern," she said.

The orcas focus on younger sharks, she said, which could have a bigger impact on vulnerable great white populations as the sharks grow slowly and mature late in life.

Researchers acknowledge that sea surface temperatures could also impact sightings of great whites, but "the immediate and abrupt decline in sightings at the beginning of 2017 and the extended and increasing periods of absence cannot be explained."

Other explanations could include direct fishing of great whites or decreased numbers of prey due to fishing, they add, but although this may "potentially contribute to an overall decline in numbers of great whites in South Africa, they are unlikely to explain the sudden localized decline."

Another 2016 study suggested that there were just a few hundred great white sharks left in South Africa, compared to earlier estimates of a few thousand.

In addition, DNA analysis of shark tissue showed that the genetic diversity of the South Africa whites is exceptionally low, making them more susceptible to external shocks like disease or environmental change.