Out of this world: Inside Japan's space colony centre 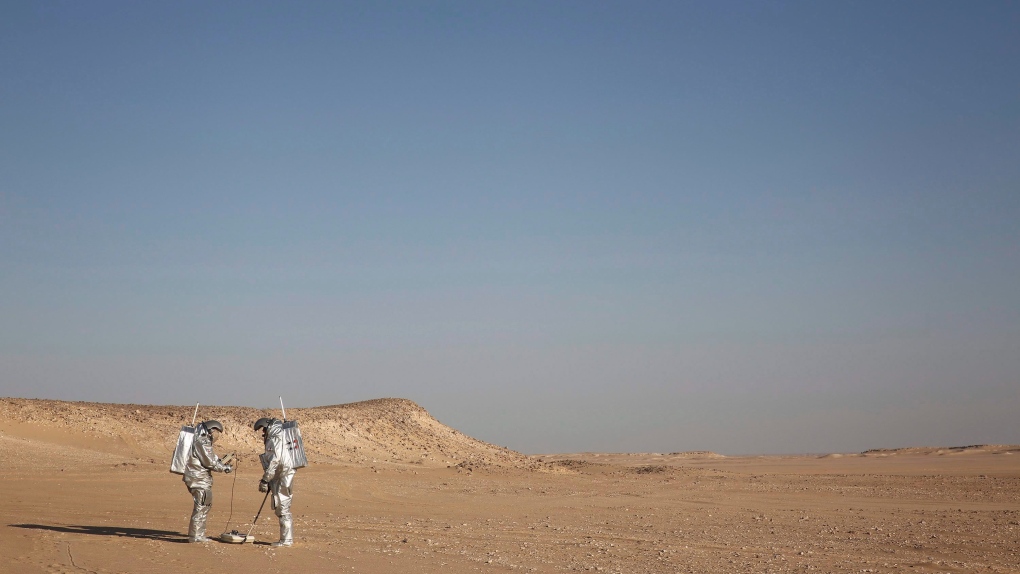 Two scientists test space suits and a geo-radar for use in a future Mars mission in the Dhofar desert of southern Oman on Wednesday, Feb. 7, 2018. (Sam McNeil/AP Photo)

Tucked away in high-tech laboratories at the Tokyo University of Science, a team of 30 researchers directed by Chiaki Mukai are studying new ways to keep humans alive on a potential moon or Mars colony.

"It's in our nature to explore. The Earth is too small for us, don't you think?" asked Mukai, a petite and energetic 66-year-old who spent more than 500 hours in space on two separate missions.

Human space exploration is entering a new era, said Mukai, with commercial ventures like Elon Musk's SpaceX and U.S. President Donald Trump's pledge to explore beyond the moon and towards Mars.

Billionaire entrepreneur Musk has grand visions for private space exploration, including sending tourists into orbit around the moon and eventually colonizing Mars.

In December, Trump directed U.S. space agency NASA to set up a lunar base as a first step in a mission to Mars.

"It's very realistic to establish a colony on the moon by 2030," said Mukai, who said humans needed to think beyond the International Space Station, which she described as a "campsite -- you have to bring everything with you".

One of her team's innovations is a unique food production system using liquid plasma created by passing high-voltage electricity through a saline solution.

This reduces the damaging algae usually formed in water when growing crops, and tests simulating conditions in space have shown that potatoes can be grown quicker and more efficiently using this system.

The Space Colony Research Centre has also developed a system to create electricity using tiny thermoelectric sensors about the size of an iPod Nano that could be attached to a potential colony.

The colony would be kept at comfortable room temperature, but outside it would vary between 130 degrees Celsius (266 Fahrenheit) during the day and -230 at night.

The technology harnesses the difference in temperature -- heat flux -- between inside and outside to create enough electricity to "power an entire space colony," said Tsutomu Lida, in charge of the project.

"The same device can be used for day and night. There are no moving parts, so there is no maintenance required," said Lida.

Another team is working on early detection and capture of space debris.

More than 29,000 pieces measuring at least 10 centimetres (four inches) across orbit Earth and could pose a danger to potential space colonists.

Mukai, who established the centre as part of the Tokyo University of Science at the beginning of the year, said many of the technologies they are working on have applications here on Earth.

"We are not only developing the technology for a moon base but as a spin-off, we will be able to help many issues that we need to solve on Earth," she said.

For example, she said hydroponic technology -- growing food without soil -- could be valuable in countries in parts of sub-Saharan Africa lacking natural resources and minerals.

Mukai said she was "certain" she would see a fully-functioning moon colony in her lifetime and was itching to go back into space, taking as her example former colleague and U.S. astronaut John Glenn, who went into orbit aged 77.

The former heart surgeon said that with her medical expertise and extra-terrestrial experience, she could be very useful on future commercial space tourism flights.

"My dream is to get a job as a flight attendant on a commercial spaceflight so I can help to get people to the moon," she said, laughing.