Orionid meteor shower to reach peak on Thursday, but full moon may interfere 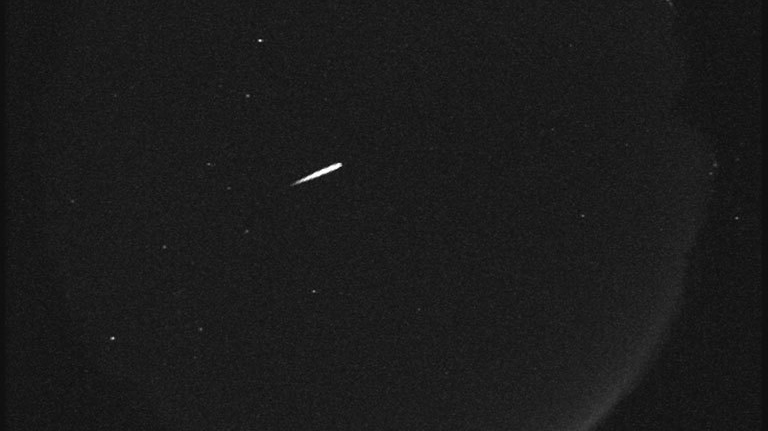 Orionid meteors appear every year around October when Earth travels through an area of space littered with debris from Halley’s Comet. (NASA/JPL)

TORONTO -- The Orionid meteor shower is expected to reach its peak in the early hours of Thursday morning, but the full moon may obstruct the show for celestial watchers.

According to NASA, the Orionid meteor shower is active from Oct. 2 to Nov. 7 with the height of activity expected early Oct. 21.

Unfortunately, this falls on the day after the full moon, or “Hunter’s Moon,” reaches its peak illumination on Wednesday morning, appearing full from Monday night through Thursday morning. This means the light of the full moon will interfere with spectators’ ability to see the meteors this year, NASA said.

Usually, the Orionids are considered to be “one of the most beautiful showers of the year,” according to the space agency, and they’re known for their brightness and for their speed.

Due to their speed – they travel at approximately 66 km/s into the Earth’s atmosphere – they can leave “glowing trains” or incandescent bits of debris in the wake of the meteor, which last for several seconds to minutes.

“Fast meteors can also sometimes become fireballs: Look for prolonged explosions of light when viewing the Orionid meteor shower,” NASA said. “The Orionids are also framed by some of the brightest stars in the night sky, which lend a spectacular backdrop for these showy meteors.”

Meteors are formed from leftover comet particles and bits from broken asteroids, according to NASA. When comets travel around the sun, they create a dusty trail around their orbits, which the Earth then passes through every year. When the bits collide with Earth’s atmosphere, they disintegrate to create “fiery and colourful streaks” in the sky.

In the case of the Orionids, the meteors originate from the ice and dust from Halley’s Comet when it returns to the inner solar system.

While the full moon is expected to hamper the view of the shower this year, those in the Northern and Southern hemispheres can still try to catch a glimpse of the meteors during the hours after midnight on Thursday.

According to NASA, hopeful viewers should try to find an area away from city or street lights. They should bring a sleeping bag, blanket, or lawn chair and lie flat on their backs with their feet facing southeast (if they’re in the Northern Hemisphere) and look up.