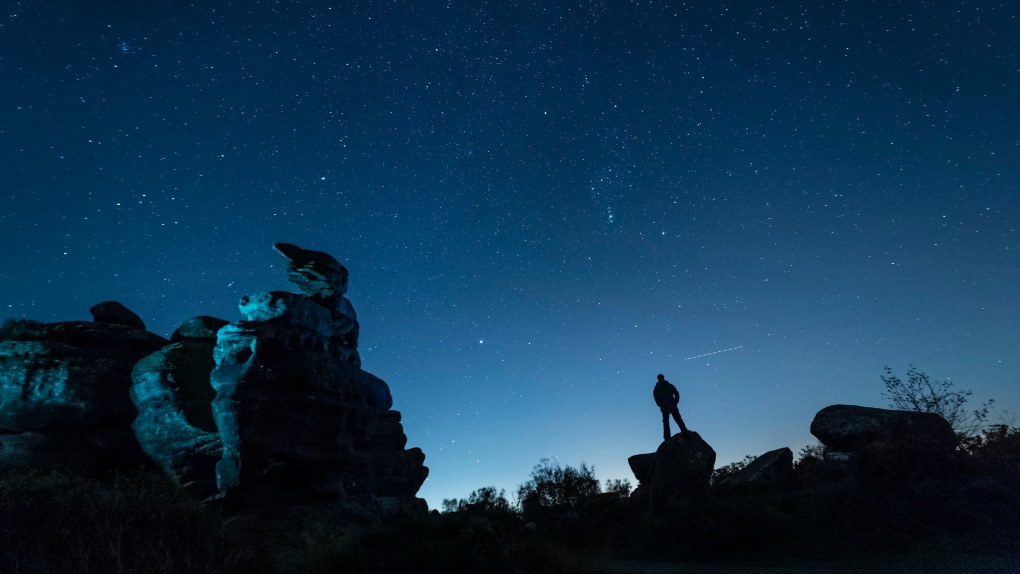 In this photo, the Orionid meteor shower is seen over Brimham Rocks in Yorkshire, England. (Danny Lawson/PA Images/Getty Images/CNN)

The Orionid meteor shower will peak in the early morning hours of Oct. 21, sprinkling remnants of Halley's Comet in Earth's atmosphere to create a dazzling display.

The moon's faint waxing crescent phase will allow for optimal viewing. And if you can't see the meteor shower on Oct. 21, experts advise looking up during the early morning hours before and after Wednesday this week because it will still be visible.

Expect up to 20 meteors per hour streaking across the sky during the peak.

This meteor shower may not be the most spectacular of the year, but it delights in other ways. The Orionids appear each year between Oct. 2 and Nov. 7, according to the American Meteor Society.

What makes these showers distinct are the beautiful gas trails left behind that can stretch out for seconds after the meteor itself is gone. Or they can break up into bright fragments.

The peak occurs when the Earth passes through a debris stream left by the Comet Halley as we intersect its orbit each year at this time. Halley's Comet itself was last seen in our sky in 1986 and will reappear in 2061. The comet makes an appearance every 76 years on its journey around the sun, according to NASA.

The meteors radiate from the well-known Orion constellation, but you don't have to look in the direction of the constellation to see them. In fact, you probably shouldn't because those meteors will have short trails and be harder to see.

While the meteor shower will peak in the overnight hours on Oct. 21, the best view will be during a brief window between 1 a.m. and dawn in your area. Allow yourself an hour or two to observe. You can check timeanddate.com to see when the shower peaks in your area.

Orionids are also hard to see because they're so fast. They zip into our atmosphere at 41 miles per second, vaporizing in our upper atmosphere about 60 miles above the Earth's surface. Some have been clocked at 148,000 miles per hour. But there is no danger of these bright meteors colliding with Earth. Some of the meteoroids are only the size of a grain of sand.

Find an open area away from the city that will afford you a wide view of the sky, and don't forget to bring a blanket or chair and dress for the weather. Give yourself some time so your eyes can adjust to the dark. And you won't need binoculars or telescopes to enjoy the show.