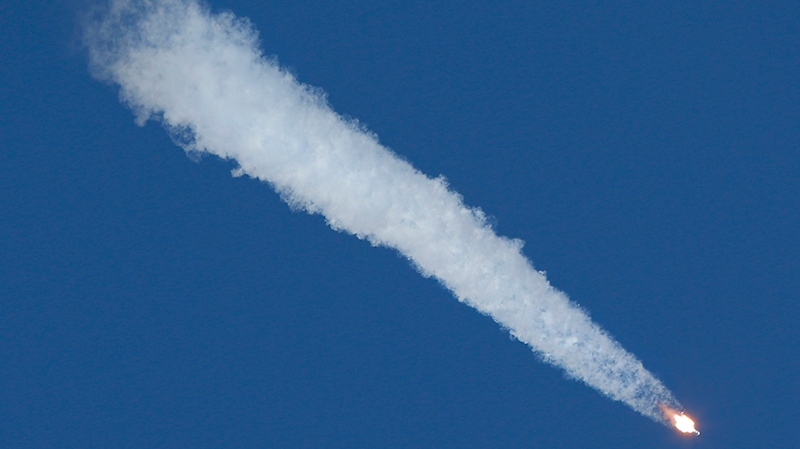 MOSCOW -- A Russian rocket soared into the cosmos Thursday carrying the Sochi Olympic torch and three astronauts to the International Space Station ahead of the first-ever spacewalk for the symbol of peace.

Video streamed by the U.S. space agency NASA reported a flawless docking with the space station about six hours after the craft blasted off from Russia's manned space facility in Baikonur, Kazakhstan.

The unlit torch for the 2014 Winter Olympics in the Russian city of Sochi is to be taken on a spacewalk Saturday, then return to Earth on Monday (late Sunday EST) with three departing space station astronauts.

Once the newcomers enter the space station following a long hatch-opening process, the orbiting lab will have nine people aboard for the first time since 2009. Fyodor Yurchikhin of Russia, NASA's Karen Nyberg and Italian Luca Parmitano are the crew scheduled to return to Earth with the torch via a Monday landing on the steppes of Kazakhstan.

The Olympic torch will not burn onboard the space outpost because lighting it would consume precious oxygen and pose a threat to the crew. The crew will carry the unlit torch around the station's numerous modules before taking it out on a spacewalk.

The Olympic torch was taken aboard the U.S. space shuttle Atlantis in 1996 for the Atlanta Summer Olympics, but this is the first it time it will be taken outside a spacecraft.

"It's a great pleasure and responsibility getting to work with this symbol of peace," Tyurin told journalists on Wednesday before the launch.

Russians Oleg Kotov and Sergei Ryazanskiy will take the torch out of the space station on Saturday while American Michael Hopkins remains inside.

The four-month Sochi torch relay, which started in Moscow on Oct. 7, is the longest in the history of the Olympics. For most of the 65,000-kilometre route across Russia, it will travel by plane, train, car and even reindeer sleigh.

Some 14,000 torch bearers are taking part in the relay that stops at more than 130 cities and towns.

Last month, the Olympic flame travelled to the North Pole on a Russian nuclear-powered icebreaker. Later this month it will sink to the bottom of the world's deepest lake, Lake Baikal. In early February, it will reach the peak of Mount Elbrus, at 5,642 metres the highest mountain in Russia and Europe.

The torch will be used to light the Olympic flame at Sochi's stadium on Feb. 7, marking the start of the 2014 Winter Games that run until Feb. 23.

Jim Heintz in Moscow contributed to this report.