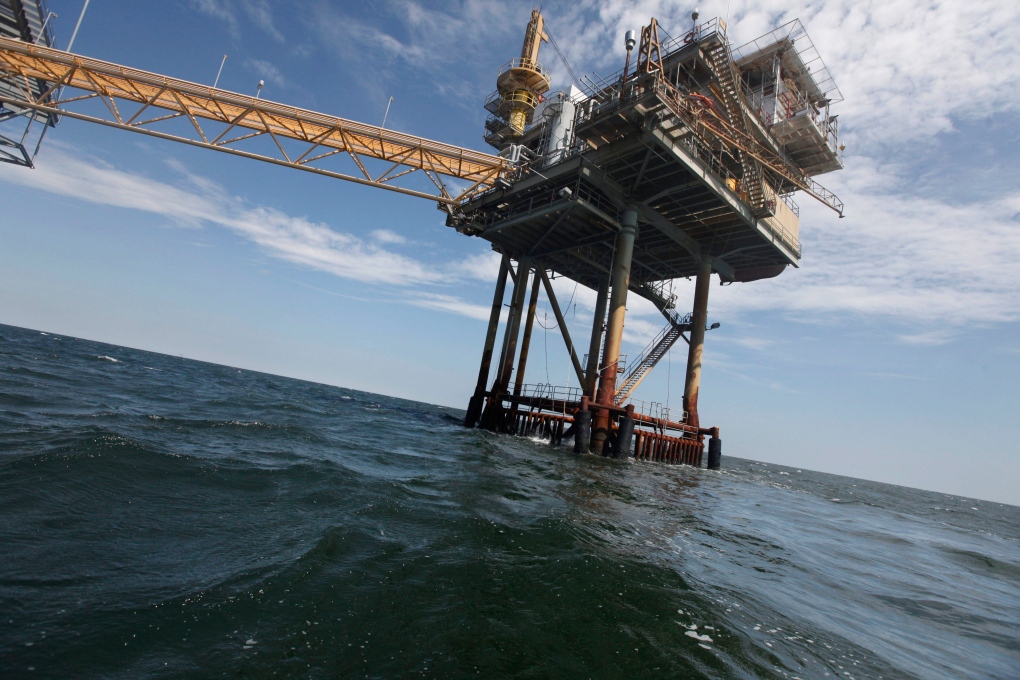 This April 27, 2010 file photo shows an oil rig in the Gulf of Mexico near the Chandeleur Islands, off the Southeastern tip of Louisiana. U.S. regulators say a unique species of baleen whales in the Gulf of Mexico may be threatened with extinction and could get special protection as oil drilling moves into the eastern Gulf of Mexico. (AP/Gerald Herbert, File)

NEW ORLEANS -- U.S. regulators say a unique species of baleen whales in the Gulf of Mexico may be threatened with extinction and could get special protection.

In April, the National Marine Fisheries Service announced it was looking at granting endangered or threatened status to the small population of Bryde's whales (pronounced Bru-dihs whales) that live in the DeSoto Canyon region, a deep-water area 50 miles (80 kilometres) east of the BP's catastrophic oil spill five years ago.

Bryde's whales are found in tropical waters around the world, but the population in the Gulf has been deemed likely a genetically separate species from other baleen whales. Scientists believe there are fewer than 50 of the whales in the Gulf. A recent survey found about 15 of the animals.

"Whenever you have a species down in their tens, it's spooky in terms of their long-term survival," said John Hildebrand, a whale specialist at the Scripps Institution of Oceanography at the University of California-San Diego.

A petition was filed last year by the Natural Resources Defence Council advocacy group seeking protection for the whales.

"There are so few of these animals left there is no doubt that they are at risk of extinction," said Giulia C.S. Good Stefani, an NRDC attorney.

Among the threats are being struck by passing ships and oil and gas activities. Scientists also say seismic surveys done by powerful air guns in oil-and-gas exploration and the general noise of ship traffic interfere with the whales' system of underwater communication. Other threats are overfishing, ocean acidification and pollution from oil spills.

Jennie Lyons, a spokeswoman for the National Marine Fisheries Service, said the whales already are protected under the Marine Mammal Protection Act, which makes it illegal to intentionally harm the creatures. But obtaining status as threatened or endangered would prompt regulators to establish critical habitat for the whales, develop a recovery plan, and consider their welfare before handing out oil drilling permits.

Five other whale species in the Gulf have been listed as endangered since 1970. They are the blue whale, finback whale, humpback whale, sei whale and sperm whale. Of those, Hildebrand said sperm whales are the only ones found in large numbers in the Gulf -- 1,665 at the latest count.

Overall, 17 species are listed as threatened or endangered in the Gulf.