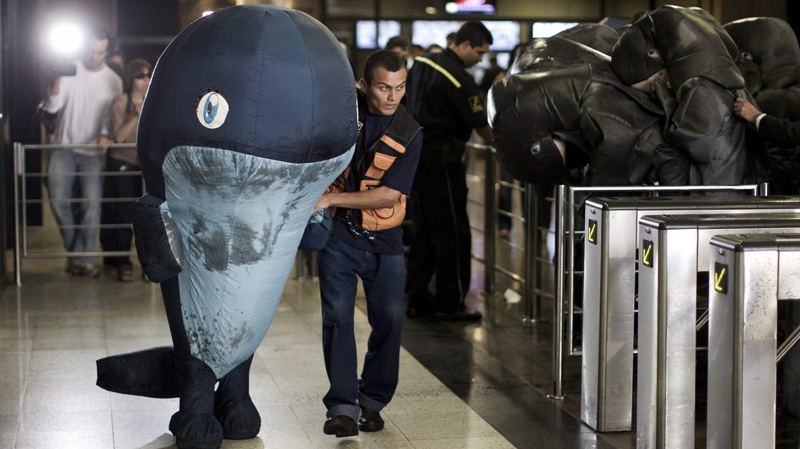 A Greenpeace activist helps a person dressed as a whale during a protest against oil exploration in Abrolhos, a large mating area for humpback whales, at the entrance of the headquarters of the Anglo-French oil and gas company Perenco in Rio de Janeiro, Brazil on Aug. 30, 2011. (AP Photo/Felipe Dana)

RIO DE JANEIRO -- An institute that tracks the population of Humpback whales that reproduce along Brazil's coast says the number of the once-threatened mammals has tripled over the last 10 years.

The Humpback Whale Institute says in a news release there are now almost 10,000 humpbacks off the Brazilian coast. In 2002, the institute counted approximately 3,000 whales.

Institute chief Milton Marcondes says the whales' fat once was used as fuel for public lighting and in construction. Hunting was banned in 1966, when only about 1,000 whales were left.

Marcondes says restoration efforts have helped the species recover in spite of global warming, accidents with boats and fishing nets.