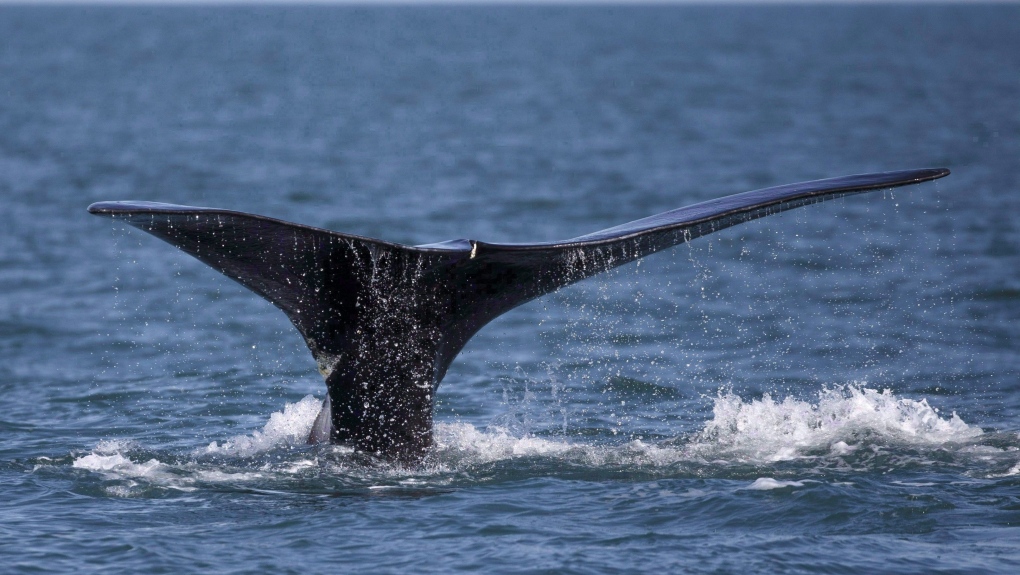 In this file photo, a North Atlantic right whale appears at the surface of Cape Cod bay off the coast of Plymouth, Mass., on March 28, 2018. (THE CANADIAN PRESS/AP-Michael Dwyer)

HALIFAX -- The critically endangered North Atlantic right whale population is continuing to decline, with the estimated number of whales at its lowest level in nearly 20 years.

The U.S.-based North Atlantic Right Whale Consortium, a partnership of nearly 40 organizations, says the population dropped to 336 in 2020, an eight per cent decrease from 2019, when the population was estimated at 366 animals.

The consortium says the whale population has been on a downward trajectory since 2011, when there were 481 whales.

It says that over the past 10 years the species, which spends summers in Canadian waters, has declined by 30 per cent.

Estimates place the number of breeding females at fewer than 100 animals.

"There is no question that human activities are driving this species toward extinction," Dr. Scott Kraus, chairman of the consortium, said in a news release Monday. "No one in right whale work believes that the species cannot recover from this. They absolutely can, if we stop killing them and allow them to allocate energy to finding food, mates, and habitats that aren't marred with deadly obstacles."

The North Atlantic Right Whale Consortium was co-founded in 1986 by the New England Aquarium and partners from the University of Rhode Island, the Center for Coastal Studies, Marineland of Florida, and Woods Hole Oceanographic Institution.

The consortium says it serves as a means for right whale researchers to collaborate and share data in order to understand and protect the species.

This report by The Canadian Press was first published Oct. 25, 2021.