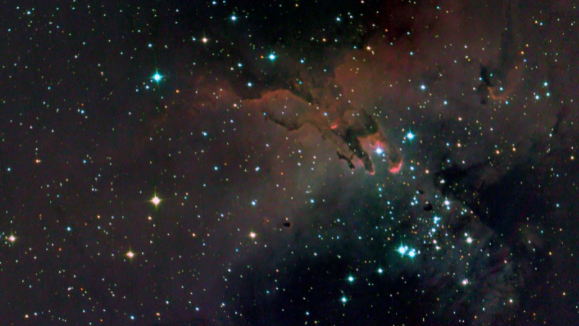 A SuperBIT optical and ultraviolet composite image of the 'Pillars of Creation', trunks of gas and dust in the Eagle Nebula, 7,000 light years away in the direction of the constellation of Serpens. (SuperBIT team, from Romualdez et al. (2018) SPIE 10702/Handout)

TORONTO -- Could the Hubble Space Telescope soon have a rival?

The Canadian Space Agency and researchers at the University of Toronto are part of the international team effort by NASA that built a new kind of astronomical telescope known as a “SuperBIT,” which is carried by balloons.

SuperBIT stands for “Superpressure Balloon-borne Imaging Telescope,” and will fly above 99.5 per cent of the Earth’s atmosphere -- carried by helium balloons roughly the size of a football stadium, according to the Royal Astronomical Society in the U.K.

The telescope is set to make its operational debut in April 2022, according a news release, and is thought to be capable of taking high-resolution images rivalling those of the Hubble Space Telescope.

Test runs in 2019 showed remarkable stability, resulting in images that are extremely clear and sharp.

NASA developed the “superpressure” balloons to be able to contain helium for months, as previous experiments show that regular balloons could only stay aloft for a few days – not long enough for experiments.

SuperBIT is schedule to launch from Wanaka, New Zealand. It will be carried by seasonal winds, circumnavigate the Earth several times, imaging the sky all night and then using solar panels to recharge its batteries during the day.

With a budget for construction and operation for the first telescope set at US$5 million, SuperBIT cost almost 1,000 times less than a similar satellite, as using balloons is cheaper than rocket fuel and require less downtime for upgrades or mechanical fixes -- as the payload returns to Earth.

The SuperBIT will continue to be upgradable and can have new instruments installed for every flight.

Longer term, the Hubble Space Telescope will not be repaired again when it inevitably fails, the release says.

For 20 years after that, the European Space Agency and NASA missions will enable imaging only at infrared wavelengths, like the James Webb Space Telescope due to launch this fall, or a single optical band, like the Euclid observatory due to launch next year.

By then, SuperBIT will be the only facility in the world capable of high-resolution multicolour optical and ultraviolet observations, and the cost makes it possible to have a fleet of space telescopes on offer time to astronomers around the world.

The goal for the 2022 flight is to measure the properties of dark matter particles. Although dark matter is invisible, astronomers map the way it bends rays of light, a technique known as gravitational lensing and SuperBIT will test whether dark matter slows down during collisions.