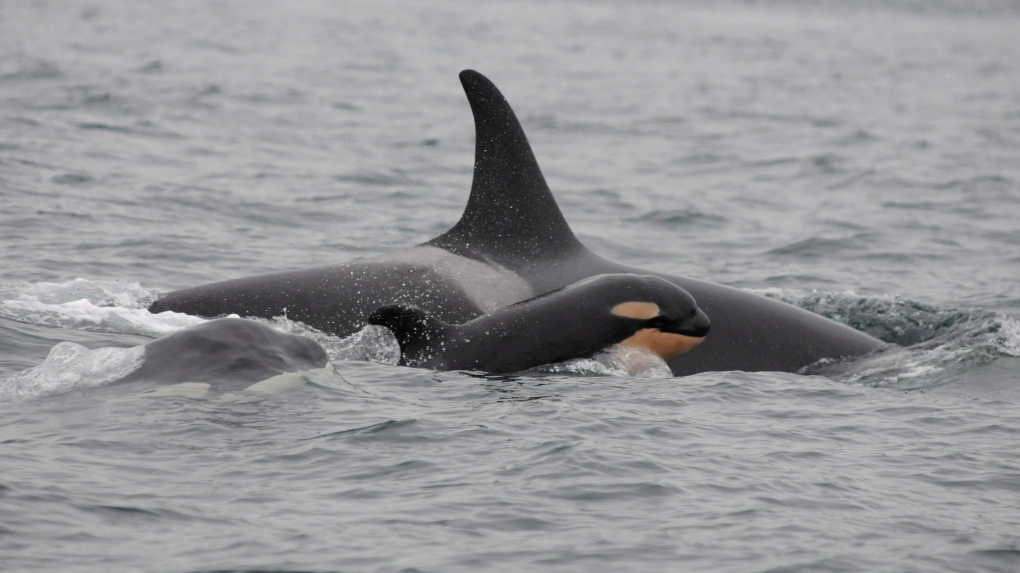 In this file photo, a baby whale is photographed in the Strait of Juan de Fuca on Saturday, Oct. 24, 2015. (THE CANADIAN PRESS/HO-Center for Whale Research)

TORONTO -- A new study has found evidence of menopause occurring in killer whales, puzzling scientists about how and why it evolved.

While most animals breed throughout their lives, the study notes that only humans and four whale species are known to experience menopause.

According to the study, killer whales are made up of multiple separate ecotypes -- different types within a species. These ecotypes, found across the world, differ in their prey specialization and patterns of social behaviour.

The study's lead author, Mia Lybkær Kronborg Nielsen of the University of Exeter, said previous studies found menopause in an ecotype called "resident" killer whales that have a social structure that tends to favour "grandmothering."

According to the study, this is when females use their energy and knowledge to help their offspring and grand-offspring, rather than competing to breed themselves.

"Previous research on the evolution of menopause has focused on resident killer whales, where both males and females usually stay in the social group into which they were born," Nielsen said in a press release.

"As a result, females become increasingly genetically related to the other members of the group as they age."

However, the new study looked at an ecotype of killer whales called Bigg's killer whales that have a social structure where offspring are more likely to leave their mother, therefore limiting any evolutionary benefits of "grandmothering."

Despite the differences, the study found menopause to be "strikingly similar" in both killer whale ecotypes.

According to the study, Bigg's killer whales leave their birth group around the time of maturity.

"Some sons and daughters stay with their mother, but overall we predict a weaker pattern of increased relatedness to fellow group members as a whale ages," Nielsen explained in the release.

Nielsen said this is important in terms of menopause as weaker relatedness would "appear to give females a weaker evolutionary reason to cease reproduction."

Using more than 40 years of data on Bigg's and resident killer whales, the researchers were able to find a similar pattern of post-reproductive life for females that accounts for more than 30 per cent of adult years.

"These different whale populations both show increased female relatedness with age, but - as this is stronger in resident than Bigg's killer whales - it's not immediately clear why the age at menopause and the length of the post-reproductive lifespan seems to be the same in both," Croft said in the release.

To determine why, Croft said more research is needed into how grandmother killer whales help their offspring and grand-offspring in the different populations. In doing so, he says more will be learned about the evolution of menopause in not only whales, but also humans.

DFO Canada says the new findings highlight the value of long-term population studies and benefits of documenting individuals throughout their lives.

"Not only do the results contribute to a better understanding of animal evolution, they have significant implications for conservation by shedding light on the importance of social structure for the recovery of these populations," the organization said in the release.