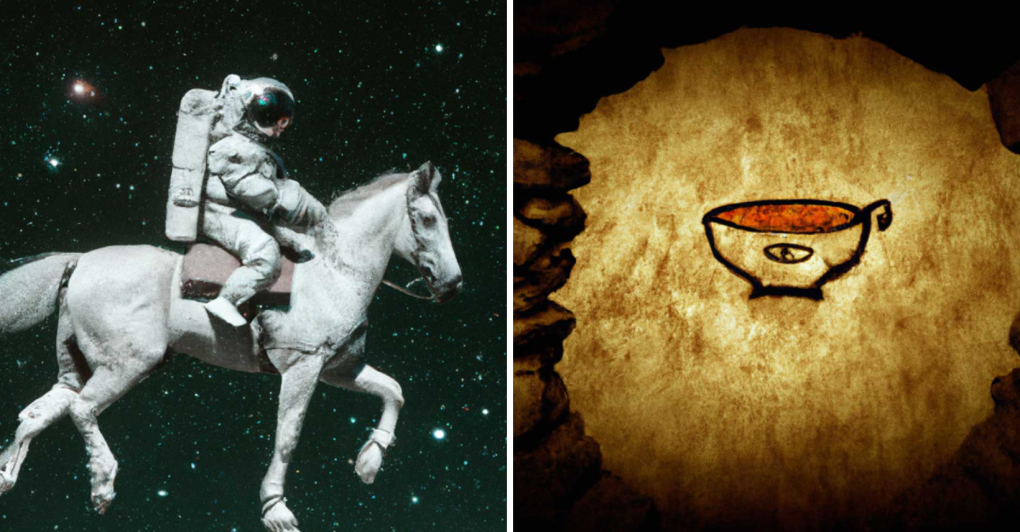 Two examples of art that can be created by inserting text prompts into the DALL-E 2 artificial intelligence system.

"An astronaut riding a horse in a photorealistic style" or "a bowl of soup that is a portal to another dimension drawn on a cave wall," are just some of the infinite prompts you can offer to a new artificial intelligence (AI) system called DALL-E 2 to generate a piece of art for you.

Currently operating on a limited scale, with a waitlist available for professional artists, developers, or online creators, DALL-E 2 has been developed by a Microsoft-backed start-up called OpenAI and offers a text-to-picture service through artificial intelligence models.

OpenAI describes DALL-E 2 on its website as "a new AI system that can create realistic images and art from a description in natural language."

The new software builds on its original system called DALL.E, which was launched in 2021, generates higher-resolution pictures and offers more accurate results, according to OpenAI’s website.

"What DALL-E 2 does is basically something that until now had been considered one of the jobs that was automation-proof," Amol Kamath, a Toronto-based industrial designer told CTVnews.ca in a phone interview.

"It's been a long-held belief in my field that because what we do is creative, artificial intelligence is not ever going to be able to replace us. But, given what they've been able to do with this piece of software, where you can effectively just give a machine a prompt and it will give you back what it thinks is the best representation of that product, it is amazing. Previously, that would`ve been the domain of a graphic designer or an illustrator."

Kamath thinks it's unlikely that AI software will replace human designers completely, but rather that more simplistic assignments could potentially be handed off to machines.

“An example of a lower level project would be perhaps a newsletter assignment for a school or that a small entrepreneur looking for promotional materials... these can easily be done by a machine instead of a human,” he said.

Kamath says that for the above categories, companies may stop relying on freelancers or lower-level designers for assignments and start depending more on software.

The software is already being experimented with on monumental scales. On Monday, DALL-E 2 became the first AI software to design a magazine cover for Cosmopolitan magazine, which was facilitated by a group of the magazine's editors, researchers at OpenAI and digital artist Karen X. Cheng.

A similar experiment was completed at the Economist last week, which used a different AI bot to generate an image for the cover of their report on AI technology.

OpenAI has acknowledged on its website the possible concerns of using only AI-generated art forms and is conducting studies on its limitations that include removing the use of explicit content, that includes violent, adult or political ones.

“Ethical considerations and bias will always be a factor in the design world,” said Kamath.

“But, DALL-E 2 could be the final frontier for automation. And I think whenever they do actually come up with a finished product... it could put quite a lot of people out of work.”

While RCMP says use of spyware is lawful, it's 'extremely intrusive': former privacy commissioner

While the RCMP says its use of spyware is lawful, there is 'no doubt' the covert collection by police of personal and other information from Canadians' devices 'is an extremely intrusive practice,' says former privacy commissioner Daniel Therrien. 'What's at play is the balancing of privacy and other public interests,' Therrien said Tuesday.

Ontario Premier Doug Ford says through his throne speech that more can be done to ease health system pressures, but is not yet offering up any new solutions.

Former U.S. President Donald Trump on Tuesday tried to turn the news of an FBI search of his Florida estate to his benefit, citing the investigation in text messages and emails soliciting political donations from his supporters.

For the first time in eight years, Canadian warships are not involved in either of two NATO naval task forces charged with patrolling European waters and defending against Russian threats.

opinion | Tom Mulcair: Why Pierre Poilievre's plan to work with provinces to reduce barriers is a good idea

The serious shortage of nurses and doctors has put the spotlight on a long overdue reform to the rules governing entrance requirements for foreign-trained professionals, says former NDP leader Tom Mulcair in an exclusive column for CTVNews.ca.

WestJet is bringing back 17 new routes that were suspended during the COVID-19 pandemic to help travellers escape the cold this winter.

Canada's top military commander says he plans to 'tweak' the Armed Forces' vaccine requirement in the next few weeks.