Nations must keep up hope in battle against climate change: UN envoy 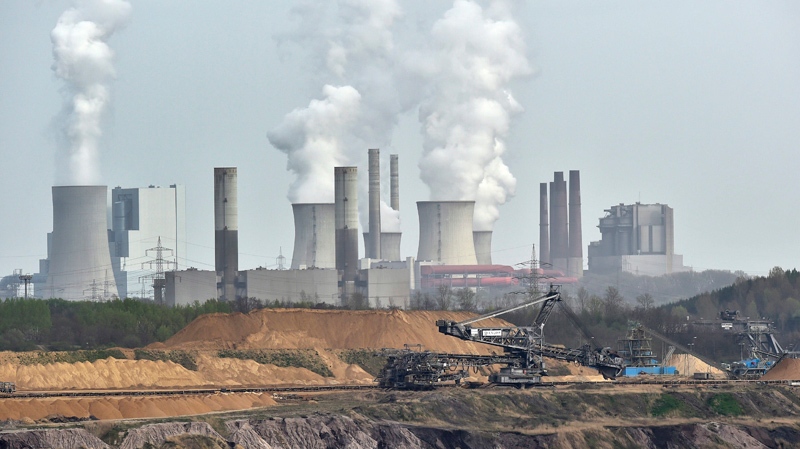 Giant machines dig for brown coal at the open-cast mine Garzweiler in front of a smoking power plant near the city of Grevenbroich in western Germany, in this picture taken Thursday, April 3, 2014. (AP / Martin Meissner)

COPENHAGEN, Denmark -- A top UN climate change expert urged world governments Monday not to be overcome by hopelessness as they negotiate a new agreement to fight global warming.

Rajendra Pachauri, chairman of the UN's Intergovernmental Panel on Climate Change, said despite the IPCC's own warnings that time is running out, the panel has also suggested actions needed to keep climate change in check.

The IPCC is meeting in Copenhagen this week to adopt the final report in its gigantic assessment of climate change. A leaked draft uses starker language than three previous reports, warning of "severe, pervasive and irreversible" climate impacts if the world doesn't rein in its emissions of heat-trapping greenhouse gases.

"The synthesis report will provide the roadmap by which policymakers will hopefully find their way to a global agreement to finally reverse course on climate change," Pachauri said.

Governments are aiming to reach such an agreement next year, but the negotiations have been hampered by disputes between rich and poor countries over how to divide the burden of climate action.

"May I humbly suggest that policymakers avoid being overcome by the seeming hopelessness of addressing climate change," Pachauri said. "Tremendous strides are being made in alternative sources of clean energy. There is much we can do to use energy more efficiently. Reducing and ultimately eliminating deforestation provides additional avenues for action."

The draft report says the impacts of some current climate changes are already dangerous, citing rising sea levels and extreme weather such as heat waves, flooding and droughts. Governments and scientists are going over the draft report line by line in Copenhagen before the final report is released.