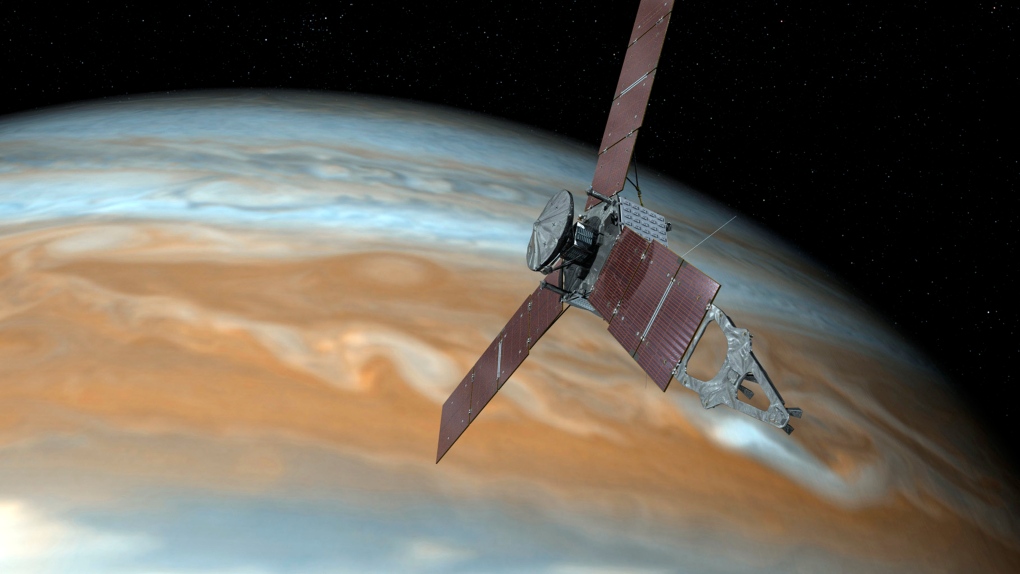 This illustration depicts NASA's Juno spacecraft making one of its close passes over Jupiter. Juno made the closest approach to Jupiter's tantalizing, icy moon Europa in more than 20 years on Thursday, Sept. 29, 2022. (NASA via AP)
CAPE CANAVERAL, Fla. -

NASA's Juno spacecraft has made the closest approach to Jupiter's tantalizing, icy moon Europa in more than 20 years.

Juno on Thursday zipped within 222 miles (357 kilometres) of Europa, thought to have an ocean flowing beneath its thick frozen crust, raising the possibility of underwater life.

Scientists hope to get lucky and observe possible water plumes shooting from the surface of Europa, close in size to Earth's moon.

"We have to be at the right place at just the right time, but if we are so fortunate, it's a home run for sure," Juno's chief scientist, Scott Bolton of Southwest Research Institute in San Antonio, said in a statement.

Pictures should be available by Friday, NASA said.

The latest observations will help NASA plan for its Europa Clipper mission, due to launch in 2024. The European Space Agency also plans close encounters with its Jupiter Icy Moons Explorer, or Juice, lifting off next year.

A former employee of Quebec's power utility who is charged with spying on behalf of China was granted bail Monday while he awaits trial.

After a surge of RSV cases among children overwhelmed hospitals across Canada in recent weeks, one infectious disease specialist explains how the respiratory virus can affect vulnerable adults.

The white gunman who massacred 10 Black shoppers and workers at a Buffalo supermarket pleaded guilty Monday to murder and hate-motivated terrorism charges, guarantying he will spend the rest of his life in prison.

An Iranian general on Monday acknowledged that more than 300 people have been killed in the unrest surrounding nationwide protests, giving the first official word on casualties in two months.