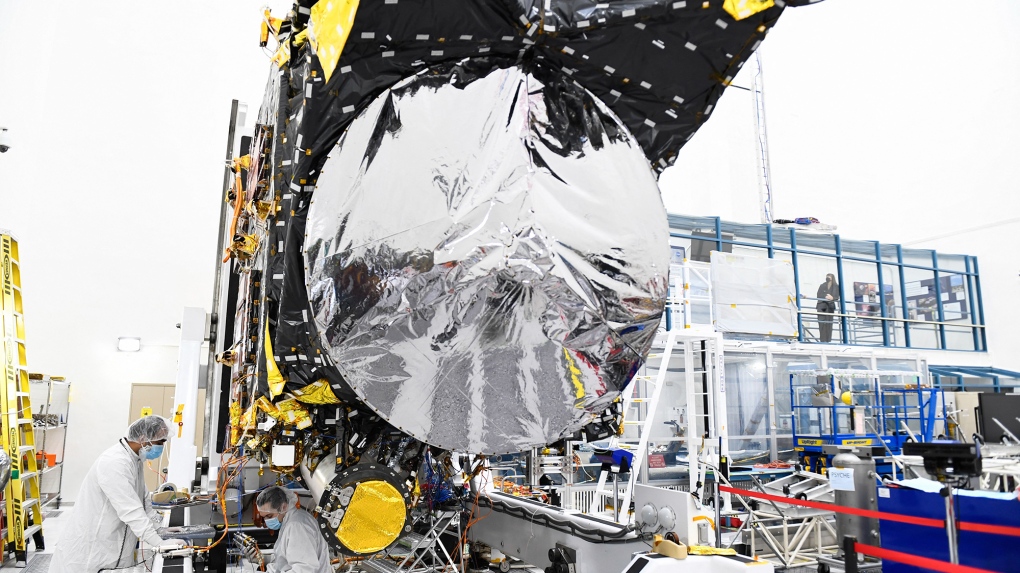 NASA's first spacecraft designed to study a metallic asteroid won't be launching this year as planned, according to an announcement made by the agency on June 24. (Patrick T. Fallon/AFP/Getty Images via CNN)

NASA's first spacecraft designed to study a metallic asteroid won't be launching this year as planned, according to an announcement made by the agency on Friday.

The Psyche mission's 2022 launch window, which opened on August 1 and closes on Oct. 11, will come to an end before the spacecraft's flight software is ready. A delay in delivering the software and its testing equipment has prevented the Psyche team from having enough time for testing prior to launch.

Engineers want to be absolutely sure that the software will function as expected once the spacecraft is in flight.

Used to control the spacecraft's orientation as it flies through space, guidance and navigation software help point its antenna toward Earth for communications and relaying data. The software also provides the spacecraft's propulsion system with trajectory information.

During testing at NASA's Jet Propulsion Laboratory in Pasadena, California, engineers discovered a compatibility issue in the software's test bed simulators. The issue has since been corrected, but there isn't enough time for a full checkout and launch in 2022.

The space agency will form an independent assessment team to review the mission and determine a path forward, including estimated costs and potential launch opportunities in 2023 and 2024. The Psyche spacecraft is currently housed at Kennedy Space Center in Florida.

"Flying to a distant metal-rich asteroid, using Mars for a gravity assist on the way there, takes incredible precision. We must get it right. Hundreds of people have put remarkable effort into Psyche during this pandemic, and the work will continue as the complex flight software is thoroughly tested and assessed," said JPL Director Laurie Leshin. "The decision to delay the launch wasn't easy, but it is the right one."

Timing for the mission makes things difficult moving forward. A 2022 launch would have delivered the spacecraft to the asteroid, also known as Psyche, by 2026. But launch periods in the coming years mean that the spacecraft would arrive much later due to different orbital positions, such as 2029 or 2030.

"Our amazing team has overcome almost all of the incredible challenges of building a spacecraft during Covid," said Lindy Elkins-Tanton, Psyche's principal investigator and foundation and regents professor at Arizona State University's School of Earth and Space Exploration.

"We have conquered numerous hardware and software challenges, and we've been stopped in the end by this one last problem. We just need a little more time and will get this one licked, too. The team is ready to move forward, and I'm so grateful for their excellence."

The delay will also halt two projects that were set to ride along with Psyche on the same SpaceX Falcon Heavy rocket at launch.

The first is NASA's Janus mission, which was designed to study twin binary asteroid systems, and the second is the Deep Space Optical Communications technology demonstration. This demo is designed to test high-data-rate laser communications that could change the way ground teams communicate with spacecraft across deep space.

The spacecraft also has a number of innovations, like ion propulsion rather than traditional rocket fuel.

If the decision is made to launch Psyche in the coming years, the spacecraft will embark on a 280 million-mile (450 million-kilometre) journey. The Psyche asteroid is so metal-rich, some scientists believe it's the exposed core of a planetesimal, or a planet in the making that separated into layers.

Collisions with other celestial objects over time might have stripped away the outer layers, exposing the remaining metallic core. If Psyche truly is a core, studying it would be like peering inside the very heart of a planet like Earth.

The potato-shaped asteroid only appears as a fuzzy blur to ground- and space-based telescopes. The unusual object could also be a piece of primordial material that never melted, according to NASA.

The results from the assessment team will determine if this mission launches in the coming years or becomes grounded.

"This is exemplified by our existing missions OSIRIS-REx, Lucy and DART. We are anxiously anticipating the review of Psyche tests to better understand what that path forward will look like."