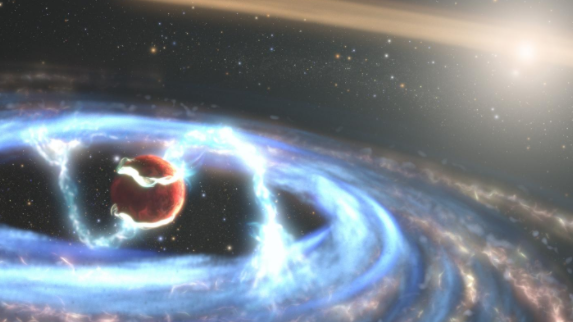 This illustration of the newly forming exoplanet PDS 70b shows how material may be falling onto the giant world as it builds up mass. (NASA, ESA, STScI, Joseph Olmsted (STScI))

TORONTO -- NASA’s Hubble Telescope is letting astronomers watch as a Jupiter-sized planet is being formed by feeding off material surrounding a young star.

Although 4,000 exoplanets have been catalogued so far, only 15 have been directly imaged by telescopes, according to a press release.

They’re often so far away and small that they appear only as dots in the best images, but NASA’s use of their Hubble Telescope is paving a new avenue into exoplanet research.

The findings were published in the April 2021 edition of the Astronomical Journal.

"We just don't know very much about how giant planets grow," said Brendan Bowler of the University of Texas at Austin in the release. "This planetary system gives us the first opportunity to witness material falling onto a planet. Our results open up a new area for this research."

The exoplanet, dubbed PDS 70, orbits the orange dwarf star PDS 70b, which is “already known to have two actively forming planets inside a huge disk of dust and gas encircling the star,” the release states. The system is 370 light-years from Earth in the constellation Centaurus.

PDS 70b is estimated to be five million years old.

The Hubble Telescope’s ultraviolet light (UV) sensitivity gives researchers a unique look at the radiation from extremely hot gas falling on to the planet, which allows them to observe how fast the planet is gaining mass.

"This system is so exciting because we can witness the formation of a planet," said Yifan Zhou, also of the University of Texas at Austin in the release. "This is the youngest bona fide planet Hubble has ever directly imaged."

Hubble’s UV observations allowed the research team to measure the planet’s growth directly for the first time, and  they estimate the exoplanet has amassed five times the mass of Jupiter over the five million year period since its formation started.

The PDS 70b exoplanet is surrounded by a disk made of gas and dust that is siphoning material from an even larger disk encircling it – researchers think magnetic field lines are funnelling material from the disks down onto the planets surface.

"If this material follows columns from the disk onto the planet, it would cause local hot spots," Zhou explained. "These hot spots could be at least 10 times hotter than the temperature of the planet."

In order to combat the glare of the orange dwarf star, which is 3,000 times brighter than the planet nearby, Zhou carefully processed the images to remove the glare so that only the planet’s light was visible.

Researchers hope the Hubble’s observations can give insight into how gas giant planets formed around the sun 4.6 billion years ago.