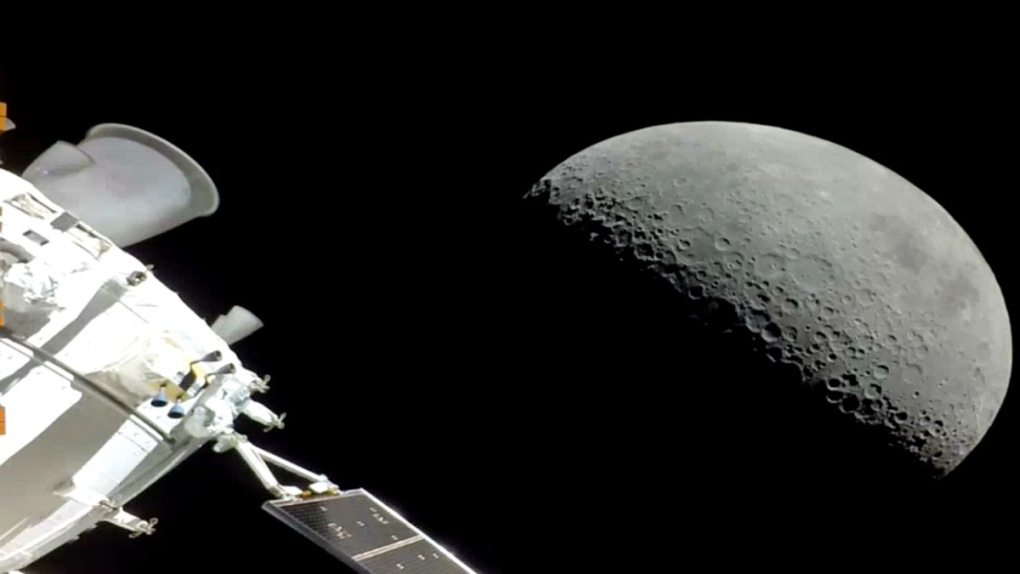 NASA's Orion capsule and its test dummies swooped one last time around the moon Monday, flying over a couple Apollo landing sites before heading home.

Orion will aim for a Pacific splashdown Sunday off San Diego, setting the stage for astronauts on the next flight in a couple years.

The capsule passed within 80 miles (130 kilometres) of the far side of the moon, using the lunar gravity as a slingshot for the 237,000-mile (380,000-kilometre) ride back to Earth. It spent a week in a wide, sweeping lunar orbit.

Once emerging from behind the moon and regaining communication with flight controllers in Houston, Orion beamed back photos of a close-up moon and a crescent Earth -- Earthrise -- in the distance.

The capsule also passed over the landing sites of Apollo 12 and 14. But at 1,200 miles (1,900 kilometres) up, it was too high to make out the descent stages of the lunar landers or anything else left behind by astronauts more than a half-century ago. During a similar flyover two weeks ago, it was too dark for pictures. This time, it was daylight.

Deputy chief flight director Zebulon Scoville said nearby craters and other geologic features would be visible in any pictures, but little else.

"It will be more of a tip of the hat and a historical nod to the past," Scoville told reporters last week.

The three-week test flight has exceeded expectations so far, according to officials. But the biggest challenge still lies ahead: hitting the atmosphere at more than 30 times the speed of sound and surviving the fiery reentry.

Orion blasted off Nov. 16 on the debut flight of NASA's most powerful rocket ever, the Space Launch System or SLS.

The next flight -- as early as 2024 -- will attempt to carry four astronauts around the moon. The third mission, targeted for 2025, will feature the first lunar landing by astronauts since the Apollo moon program ended 50 years ago this month.

The Associated Press Health and Science Department receives support from the Howard Hughes Medical Institute's Department of Science and Educational Media Group. The AP is solely responsible for all content

This story has been updated to show that NASA now estimates the flyover of Apollo sites was 1,200 miles above the moon, not 6,000 miles.