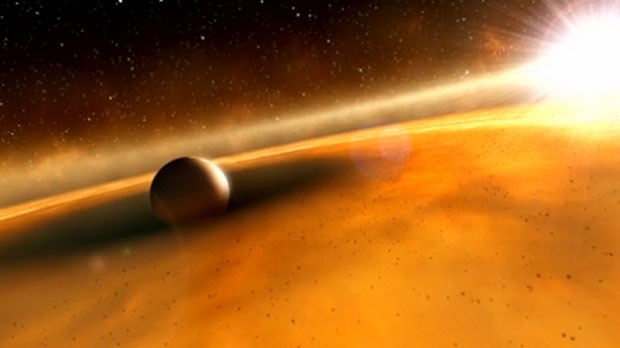 This illustration shows Fomalhaut b, an exoplanet believed to exist in a ring of dust and rubble surrounding its parent star.

Just in time for Halloween, NASA has resurrected a "zombie" planet previously believed to be nothing more than a lifeless, creepy cloud of dust.

The space agency announced this week that scientists -- led by a University of Toronto researcher -- had taken a second look at data from the Hubble Space Telescope, to investigate the seemingly paranormal characteristics of Fomalhaut, a star located 25 light years from Earth, in the constellation Piscis Austrinus.

In 2008, Hubble astronomers had announced the discovery of what they believed was a massive exoplanet named Fomalhaut b, which orbited Fomalhaut. The planet was embedded in a huge ring of debris that was "surrounding but offset" from the host star. It was among the first planets outside our solar system discovered via direct imaging, meaning the human eye could actually see it, sending the scientific world into a tizzy.

"The planet's location and mass -- believed to be no more than three times Jupiter's -- seemed just right for its gravity to explain the ring's appearance," NASA said.

But the mystery deepened as further investigation failed to turn up credible evidence that the planet did, in fact, exist.

NASA's Spitzer Space Telescope, which detects objects using infrared technology, was unable to find the planet, which also failed to demonstrate the motion typically expected of an exoplanet orbiting a star.

Essentially, skeptics said, Fomalhaut b was dead; nothing more than a phantom dust cloud that astronomers mistook for a planet.

Now the so-called zombie planet is lurching back to life, thanks to a new analysis of the Hubble data.

"Although our results seriously challenge the original discovery paper, they do so in a way that actually makes the object's interpretation much cleaner and leaves intact the core conclusion: that Fomalhaut b is indeed a massive planet," said Thayne Currie, a former astronomer with NASA's Goddard Space Flight Center and now a U of T researcher.

Currie and his team took a second look at Hubble's observations of the star from 2004 and 2006. They easily located the planet and found that Fomalhaut b maintained a consistent brightness -- unlike the earlier findings.

The team took this as one indication it could be a planet.

Another issue of previous concern was the planet's orbit. Skeptics said that if the exoplanet was responsible for the star's offset, sharply sculpted ring, then it must follow an orbit aligned with that ring. And if that was the case, the orbit must be now at its slowest speed -- a hypothesis that didn't match up with the orbital speed cited by the original study.

Currie's team's examination of the data, however, found that the orbit is consistent with the original notion that the planet's gravity is modifying the debris and dust that comprised the ring.

Still, they couldn't find Fomalhaut b using infrared technology, which had been used to corroborate the existence of other exoplanets.

Currie's team tried to locate the planet using the infrared Subaru Telescope in Hawaii, but had the same unsuccessful result as earlier teams that searched using the Spitzer telescope.

But Currie maintains that doesn't mean the planet doesn't exist. Instead, he proposes other reasons why it can't be found using infrared technology.

"Assuming there is a planet there, the temperature, the atmosphere is probably not hot, like some of the other directly imaged planets. It's probably much colder," he told CTVNews.ca "And the reason I think it's not detected on the infrared is that the planet is not as massive."

While other exoplanets planets discovered around the same time as Fomalhaut b were believed to be roughly five to seven times the size of Jupiter, Fomalhaut b is much smaller.

"The models that went into extreme detail to explain how a planet could sculpt this ring gave a best estimate of half the Jupiter mass," he said. "And if that's true there's no way you could have detected this in the infrared."

The sticking point, Currie said, is the dust and debris. Essentially, if there's no planet there to serve as a source of replenishment for the massive dust cloud, it would likely dissipate quickly. But that just isn’t happening.

Instead, Currie posits that there is a planet there, buried deep in a chaotic cloud of dust and pieces of rubble that range in size from boulders to asteroids.

"They are colliding and creating all this dust and that is the dust we see as this thing we identify as Fomalhaut b," he explained, adding that Saturn is believed to have gone through a similar stage, with some of the rubble eventually forming its moons.

"If nothing else, it's an exceptionally rare object, and it will be studied and argued about for a very, very long time. And regardless of exactly what it is, by studying it we'll understand a lot more about the kind of environment that young planetary systems have, what they look like when they're in their infancy."

And maybe, just maybe, Currie and his team will one day be able to confirm -- without a doubt -- the existence of the world's first zombie planet.