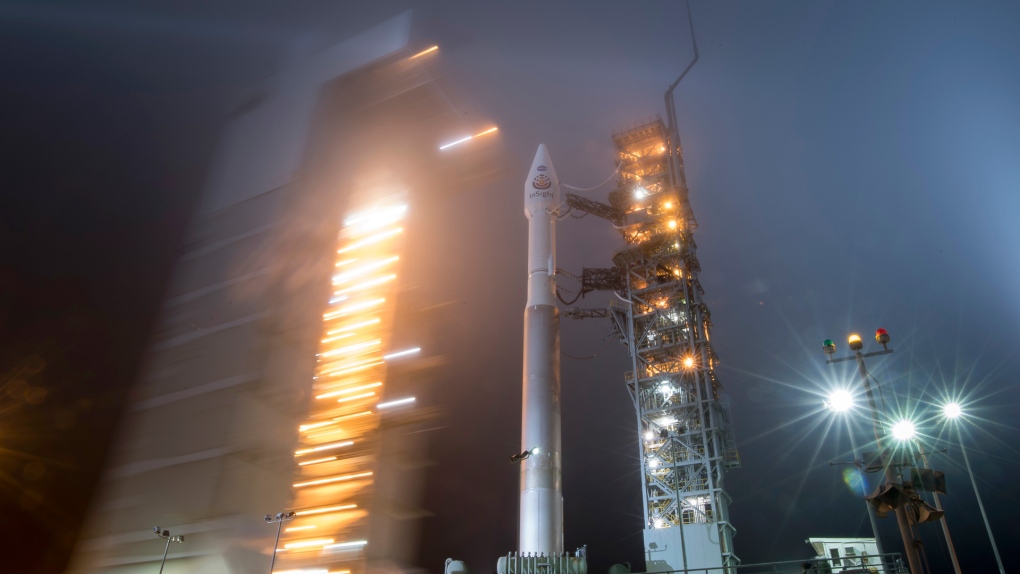 In this May 4, 2018 photo provided by NASA, the mobile service tower is rolled back to reveal the United Launch Alliance Atlas-V rocket with NASA's InSight spacecraft onboard at Vandenberg Air Force Base, Calif. (Bill Ingalls/NASA via AP)

The space agencies of the United States and China are coordinating efforts on Moon exploration, NASA said Friday, as it navigates a strict legal framework aimed at protecting national security and preventing technology transfer to China.

"With the required approval from Congress, NASA has been in discussions with China to explore the possibility of observing a signature of the landing plume of their lunar lander, Chang'e 4, using our @NASAMoon spacecraft's instrument," NASA's associate administrator for the science mission directorate, Thomas Zurbuchen, wrote on Twitter.

NASA shared information from a U.S. satellite while China told the Americans about the latitude, longitude and time of the landing "in a timely manner," he said.

The hope was that NASA's Lunar Reconnaissance Orbiter (LRO) could observe the historic touchdown of the Chinese lander on January 3.

NASA provided the planned orbit path of LRO to China, but it turned out the spacecraft was not in the right place at the right time.

"For a number of reasons, NASA was not able to phase LRO's orbit to be at the optimal location during the landing, however NASA was still interested in possibly detecting the plume well after the landing," the agency said in a statement.

"Science gathered about how lunar dust is ejected upwards during a spacecraft's landing could inform future missions and how they arrive on the lunar surface."

Such observations could help astronauts prepare for future missions to the Moon.

NASA's lunar orbiter will pass over the Chang'e 4 landing site on January 31 and will snap pictures, as it did for the Chang'e 3 in 2013.

The agency said significant findings resulting from the cooperation would be shared with the global research community in February at a United Nations space gathering in Austria.

Since 2011, the U.S. Congress has barred NASA or the White House Office of Science and Technology Policy from using federal funds "to develop, design, plan, promulgate, implement or execute a bilateral policy, program, order, or contract of any kind to participate, collaborate, or coordinate bilaterally in any way with China or any Chinese-owned company."

Exceptions are possible, but NASA must convince Congress and the FBI that the activity would "pose no risk of resulting in the transfer of technology, data, or other information with national security or economic security implications to China or a Chinese-owned company."

The clause was inserted in a U.S. spending bill after a wave of cyber-attacks that was traced to sources in China.

NASA said in its Friday statement that "all NASA data associated with this activity are publicly available," and that NASA's cooperation with China "is transparent, reciprocal and mutually beneficial."

Sino-U.S. cooperation could extend beyond the current lunar project, according to Wu Weiren, chief designer of China's Lunar Exploration Program.

In an interview broadcast by state television CCTV on Sunday, he said NASA scientists had discussed a possible collaboration at an international conference "a few years ago," and that U.S. scientists had asked to extend the lifespan of China's Queqiao relay satellite from three to five years to facilitate the planning of an American moon mission.

"Later, they said, feeling somewhat embarrassed, that they wanted to land on the far side of the moon too, so if we let (our relay satellite) operate longer they can also use it," he said.

The satellite in question aids in communications with a lander on the far side of the Moon.

NASA scientists had also discussed possibly placing a beacon on the Chang'e 4 probe, he added.

"If we put a beacon there, they also know where to land. I told them our Chang'e 4 can be used as a beacon for you in future," Wu said.

However the U.S. restrictions "might be a much higher barrier to overcome" in ambitious cooperation projects such as a lunar research base that "might involve sharing of technological information," said Henry Hertzfeld, director of the Space Policy Institute at George Washington University.