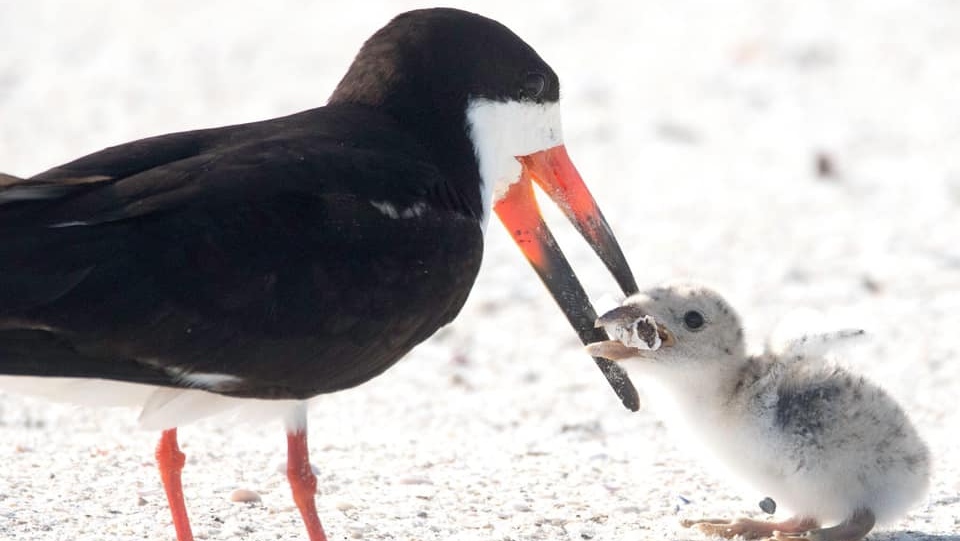 An adult black skimmer bird feeds its chick a cigarette butt in this photo taken in St. Pete Beach in Florida. (Karen Mason)

A Florida woman has shared a heartbreaking photo of a mother bird feeding her young chick a cigarette butt as a reminder to people to stop treating the environment like “one giant ashtray.”

Karen Mason, a volunteer bird steward for the National Audubon Society and an avid photographer, was strolling St. Pete Beach in Florida last week to educate beachgoers about birds when she came across the adult black skimmer bird and its chick.

“I happened to see this parent feeding a chick and I could tell it was not a fish, but I really didn’t know,” Mason recalled during a phone interview with CTVNews.ca on Friday.

The Largo, Fla. resident said she pulled out her camera with its long lens and snapped a few photos of the birds. When she returned home, she uploaded the images to her computer and blew them up so she could inspect them more closely.

“That’s when I realized it was a cigarette butt,” she said. “I was just furious. Obviously, she had no idea what she was feeding her chick.”

In that very moment, Mason said she decided to share the photos on every Facebook group she belongs to in order to shine a spotlight on the effect litter has on wildlife.

“It was just appalling to me to see what was happening there. The cigarette butts are such a huge problem,” she said. “People just think ‘Oh it’s just a little tiny butt, it’s made out of paper, blah blah blah,’ but it’s a lot more than that.”

Mason said cigarette butts comprise the biggest amount of trash picked up during regular beach cleanups in the area.

“It’s such a little thing. Why can’t you just take it with you?” she asked “Take a little bin with you, take something, put it in your pocket. People that are responsible do that. They don’t throw them on the beach just because it’s convenient.”

The bird steward said cigarette butts can also be dangerous for children who may mistakenly pick them up.

“Who’s to say that kids aren’t picking them up and sticking them in their mouths? If you don’t care about the birds, care about your kids,” she said.

Mason said she hopes her photos remind people to “think twice” before littering.

“We have to realize this is not just happening in one little area, this is everywhere. Even if you’re not on St. Pete Beach it doesn’t mean it’s not something that affects you where you are,” Mason said.