Most amphibians can glow in the dark, scientists report 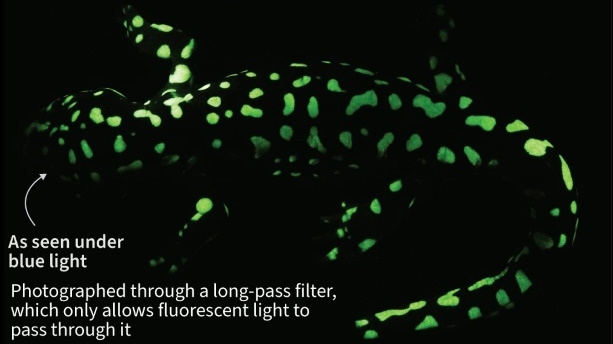 Biofluorescence is where organisms emit a glow after first absorbing light energy - and before the current study had only been observed in one salamander and three frog species. (AFP)

WASHINGTON -- Glowing amphibians may be far more common than thought, scientists reported Thursday, suggesting that the ability may help them locate each other in low light.

Jennifer Lamb and Matthew Davis from St Cloud State University in Minnesota exposed 32 species of the frogs, salamanders, newts and eels to blue or ultraviolet light, finding that the creatures emitted colorful patterns in a process known as "biofluorescence."

These patterns ranged from blotches and stripes to glowing bones or even all-over fluorescence, in various hues of green, orange, and yellow, the authors said in a new study published in Scientific Reports.

Some even had fluorescent green skin secretions and urine.

Biofluorescence is where organisms emit a glow after first absorbing light energy, and before the current study had only been observed in one salamander and three frog species.

It happens through various mechanisms through the presence of fluorescent proteins in skin and bones. Some of the amphibians also have chromatophores, or pigment-containing and light-reflecting cells.

The authors wrote that many amphibians are nocturnal and inhabit dense forests, and so the ability to glow may thus help them find each other, as their eyes contain rod cells that are sensitive to green or blue light.

Biofluorescence might also create more contrast between amphibians and their environment, allowing them to be more easily detected by other amphibians.

In other species, glowing has been found to help creatures camouflage, signal themselves to potential mates, or even help them mimic the appearance of their predators.

Last year, a different set of US researchers the molecules responsible for allowing swell sharks to glow, hypothesizing that it might perform functions other than identification, including fighting microbial infection.