Mosquitoes target humans to bite by smelling their sweat: study 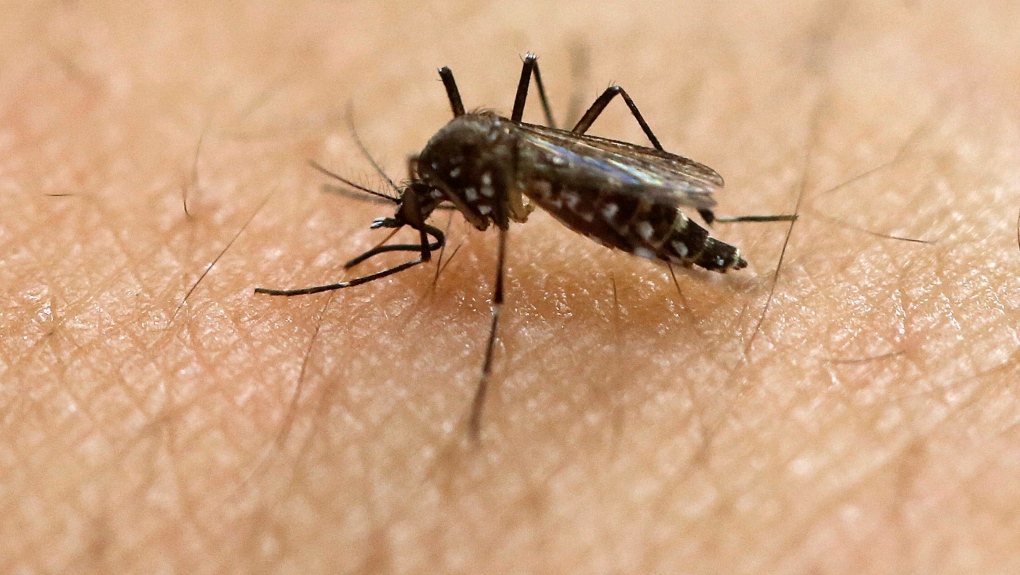 In this Jan. 18, 2016, file photo, a female Aedes aegypti mosquito, known to be a carrier of the Zika virus, acquires a blood meal on the arm of a researcher at the Biomedical Sciences Institute of Sao Paulo University in Sao Paulo, Brazil. (AP Photo/Andre Penner, File)

Researchers in the U.S. claim to have discovered a new way to prevent mosquitoes from biting people by targeting a smell receptor located in their antennae that can detect human sweat.

Senior author Matthew DeGennaro, a mosquito neurobiology researcher at Florida International University, said they focused on the IR8a gene found in Aedes aegypti mosquitoes, which transmit disease, because it was the only one expressed in the insects’ nose.

The team of researchers then genetically modified mosquitoes so that their IR8a gene was disrupted or blocked. DeGennaro said they then tested how important the IR8a gene is for detecting humans by recording the olfactory sensors neurons, located in the mosquitos’ antennae, which light up when they detect an odour.

They found the sensors in the antennae didn’t fire up in the mosquitoes with disrupted IR8a genes, despite the fact they were in close proximity to human skin.

“We found that they had this 50 per cent reduction and attraction to human odour and they had no attraction to lactic acid,” DeGennaro said in a telephone interview with CTVNews.ca from Miami on Thursday.

DeGennaro explained that lactic acid, a component of sweat, could be something that helps mosquitoes identify and find humans.

“One of the things that may distinguish us for mosquitoes as being human is our level of lactic acid,” he said. “It’s something that humans actually put off a lot more of than other mammals.”

DeGennaro said that mosquitoes first detect humans by the carbon dioxide they exhale, which they can detect at a distance of more than 10 metres away.

“It’s sort of almost like coffee in the morning for us. It’s sort of gets them going,” he said. “Then they decide ‘OK. There might be a potential host here.’”

After that, the mosquitoes will move closer to a potential blood source and that’s when they sense humans’ odour, the neurobiology researcher said. Once they move even closer, the insects will detect a person’s body heat and eventually land on their skin where they will taste it with their legs.

Although mosquitoes rely on more than just sweat to detect humans, DeGennaro said their dependence on the IR8a gene to locate people was clearly evident in the experiment.

The findings could be used to develop new and improved mosquito repellants or live-saving perfumes, which specifically interfere with the IR8a olfactory receptor, DeGennaro said.

“We’ve identified a really important pathway that if we learn a little more about it, we should be able to block it and maybe use that to create a chemical that will make us more invisible to the mosquito,” he offered.

On the flip side, the discovery of the IR8a gene could also be used to create a new mosquito attractant that lures the insects away from people and into traps, the research states.

Ultimately, the researchers hope to study the genetic makeup of mosquitoes further so they can eventually develop a chemical to protect humans from disease-carrying mosquitoes.

“The transmission of diseases like dengue, yellow fever, Zika, and malaria can be blocked if we stop these mosquitoes from biting us,” DeGennaro said. “In order to find new solutions to prevent mosquito bites, we need to focus on understanding the molecular basis of mosquito behavior.”