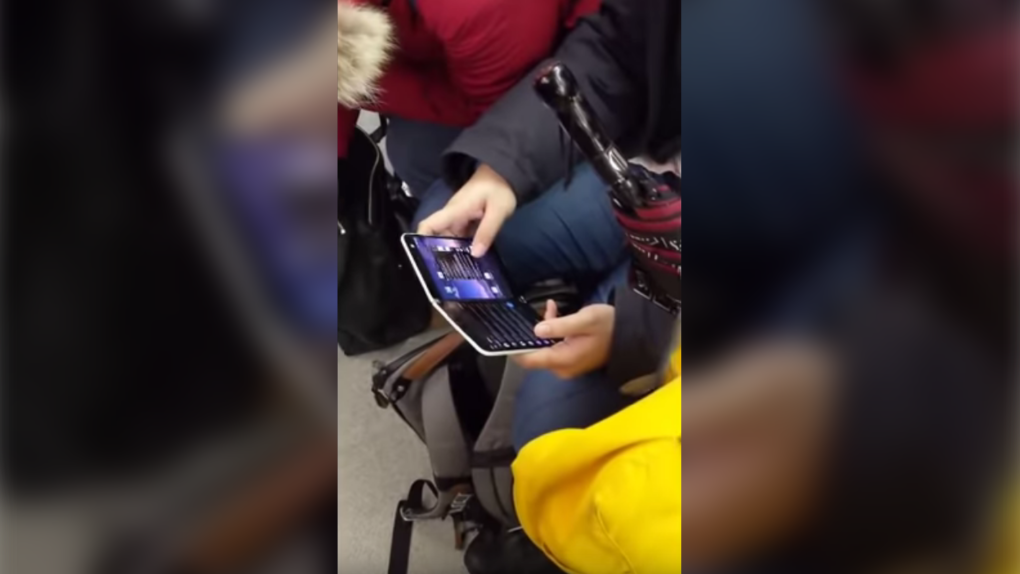 A video uploaded to YouTube by user Israel Rodriguez shows a commuter using a dual-screen, foldable device that appears identical to the Microsoft Surface Duo first announced by the company in October. (Israel Rodriguez via Storyful)

TORONTO -- Microsoft's first Android device, the Surface Duo, is one step closer to becoming reality after a suspected prototype of the smartphone was spotted on the Vancouver SkyTrain last week.

A video uploaded to YouTube by user Israel Rodriguez shows a commuter using a dual-screen, foldable device that appears identical to the Microsoft Surface Duo first announced by the company in October.

The video, which has been verified by Storyful, appears to show the device being slow and unresponsive, eventually freezing after opening an app. After much swiping, the person using the device appears to obscure the screen momentarily. There is also a visible Windows logo.

Experts say this is the first time the new device has been spotted in the wild.

Microsoft unveiled the Surface Duo as part of a new lineup of Surface computers in October, doubling back on its decision to step away from smartphones after poor sales of its Windows Phone.

Although the company says the Surface Duo has the ability to make phone calls, it stopped short of calling the device a “smartphone” in its announcement.

The Surface Duo features two screens, both with 5.6-inch displays, connected with a hinge so it can fold like a laptop, which can be seen in the video.

The video also appears to show additional features not announced by Microsoft, including an LED flash next to the camera.

Microsoft says the device will be available during the 2020 holiday season, but has not offered any details about price.

- With files from the Associated Press