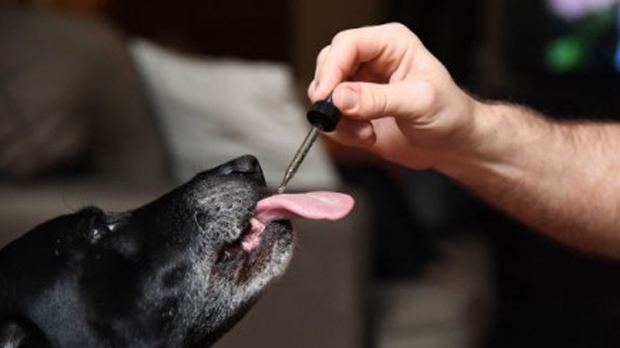 It's early morning, just after breakfast, and six-year-old Cayley is wide awake, eagerly anticipating her daily dose of cannabis.

The black labrador, tail wagging, laps up the liquid tincture owner Brett Hartmann squirts into her mouth, a remedy he uses morning and evening to help alleviate Cayley's anxiety.

"Ever since I started her on CBD (cannabidiol -- a marijuana extract), her separation anxiety has disappeared," says Hartmann, 30, of his pet, a service dog he acquired while in college because he had epilepsy.

Hartmann, who lives near Los Angeles, said he turned to medical marijuana for Cayley after he no longer needed her to accompany him everywhere, having himself overcome his epilepsy with the help of the drug.

"I just allowed her to retire and... I don't think she handled the transition too well," Hartmann, who also has his ageing dachshund on cannabis, said. "But CBD has really helped."

With the multi-billion dollar medical and recreational marijuana industry for humans blossoming in the United States, so is a new customer base -- animals.

"We are seeing about 20 per cent growth every single month," said Alison Ettel, founder of Treat Well, a company in California that specializes in non-psychoactive medical cannabis products for animals and humans.

She said owners of animals -- from dogs, cats, lizards, turtles, alpacas, horses to farm animals -- are increasingly turning to cannabis to help treat ailments ranging from cancer and heart murmurs to arthritis and ear infections.

And the feedback, Ettel says, is more than encouraging.

"We probably get at least one to five cancer patients a day and the results we're seeing are just blowing my mind," she said, claiming the drug can help improve life expectancy.

When she started in the business about a decade ago, Ettel said she would treat about 20 animals a year, mostly dogs.

Today, with medical marijuana legalized in 29 states -- plus the District of Columbia -- the number of four-legged patients has skyrocketed.

"Now we are treating thousands of animals," she said.

But despite the rush to cash in on the booming industry, cannabis remains illegal on the federal level and marijuana laws on the state level don't apply to pets.

That has translated into pet owners having to get a marijuana card for themselves in order to purchase cannabis for their pups, as veterinarians are barred from prescribing marijuana.

The legal grey area and the lack of substantial studies on the effect of cannabis for pets also means that owners and dispensaries have had to tread carefully on dosages.

"The last thing you want to do is for your dog or pet to be uncomfortable."

Proponents say the advantage of cannabis for ailing pets as opposed to painkillers or other traditional drugs is that when properly used, it has no known serious side effects.

"Other medicines can take a toll on an animal's kidney, liver and other organs," Hayes said.

Another advantage, she added, was the lower cost of medical cannabis compared to some medication.

Veterinarians are cautioning against viewing cannabis as a miracle drug.

"There are no studies on dogs or cats, much less guinea pigs or other species, so I don't know what the potential benefits could be, if any," said Ken Pawlowski, a veterinarian and head of the California Veterinary Medical Association.

While a pet may feel better after ingesting medical marijuana, he warned that did not mean its illness was gone.

"Is the underlying disease actually being treated or is it getting worse?" Pawlowski said. "The dog can feel better because it's high and actual known therapy that could help could be overlooked."

But pet owners like Hartmann are undeterred, while acknowledging that people need to be better educated on how to use the drug.

"We have so many success stories," said Hartmann, who works as a cannabis consultant. "For the longest time I was anti-cannabis and was not a proponent of it until I started using it for my epilepsy. It helped me restore my body and it totally makes sense to use it for my dogs."

"I have people who roll their eyes all the time and I say 'You're just going to have to see it to believe it.'"