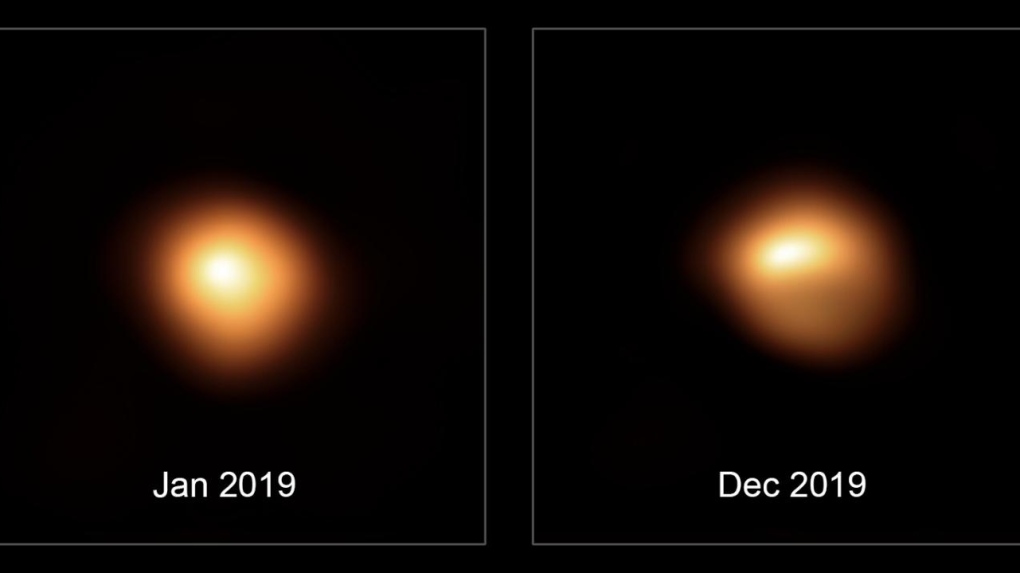 Observations of the star Betelgeuse taken by the ESO's Very Large Telescope in January and December 2019, which show the star's substantial dimming. (ESO/M. Montargès et al.)

TORONTO -- After months of scientific speculation that a giant red star could be nearing the end of its life following a drastic dimming, scientists now have a new theory on the dazzling star’s decline.

Betelgeuse may just be dirty.

Last December, scientists announced that the supergiant Betelgeuse has been significantly dimming since October. The star is part of the shoulder of the constellation of Orion, and is a relatively close neighbour to Earth, at only 700 light years away. Although the star’s brightness fluctuated naturally, this time it had dropped to around 40 per cent of its usual brightness -- a change so sudden and intense that a rumble went through the scientific community.

Could the star be on the verge of going supernova?

In a paper in Astrophysical Journal Letters, scientists with the University of Washington and Lowell Observatory proposed that Betelgeuse’s dimming wasn’t a sign of its imminent death, but a regular part of the star’s life cycle.

"Red supergiants will occasionally shed material from their surfaces, which will condense around the star as dust,” said Emily Levesque, an associate professor of Astronomy at the University of Washington, in a press release. “As it cools and dissipates, the dust grains will absorb some of the light heading toward us and block our view."

Essentially, Betelgeuse is dirty, covered in a layer of dust made up of its own discarded essence, like a human being shedding skin cells.

The researchers came to this conclusion after measuring the temperature of the supergiant, something that is no easy task when you’re talking about a celestial body. Scientists can’t exactly stick a thermometer into a star. Instead, to determine temperature, they measure the spectrum of the light it’s emitting.

When Levesque and Lowell Observatory astronomer Philip Massey calculated Betelgeuse’s temperature in mid-February, they found that it was approximately 3,325 degrees Celsius, only 50-100 degrees cooler than the temperature recorded in 2004, years before the star began to dramatically dim.

If Betelgeuse was dimming because of instability in the core causing material to move to the surface and cool there -- one of the theories that pointed to an imminent supernova -- than Levesque and Massey would have seen a much greater decrease in temperature.

“A comparison with our 2004 spectrum showed immediately that the temperature hadn't changed significantly," said Massey in the press release. “We knew the answer had to be dust.”

The star is already starting to brighten back up, although only slightly.

Betelgeuse’s death is still imminent -- in cosmic terms, at least. It’ll happen within the next 100,000 years, astronomers believe, when the star’s core collapses. But we probably won’t be getting that light show anytime soon.

"Red supergiants are very dynamic stars," said Levesque. "The more we can learn about their normal behaviour -- temperature fluctuations, dust, convection cells -- the better we can understand them and recognize when something truly unique, like a supernova, might happen."