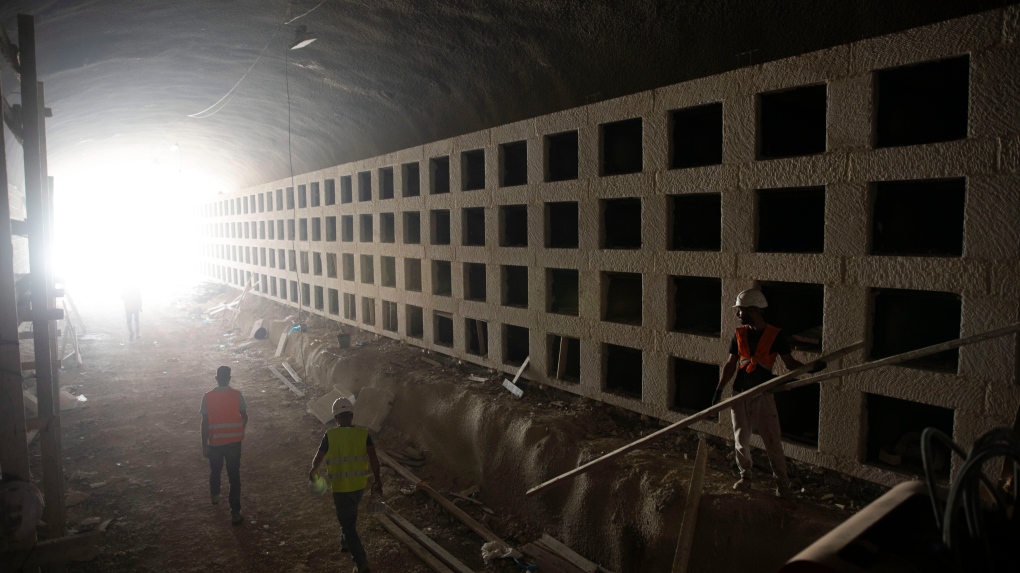 In this Sunday, Aug. 18, 2019 photo, workers walk at the construction site of a massive underground cemetery in Jerusalem. (AP Photo/Oded Balilty)

JERUSALEM -- Under a mountain on the outskirts of Jerusalem, workers are completing three years of labour on a massive subterranean necropolis comprised of a mile (1.5 kilometres) of tunnels with sepulchers for interring the dead.

Up above, the Har Hamenuchot Cemetery dominates the hillside overlooking the main highway leading into Jerusalem from Tel Aviv. But in October, the cemetery's management plans to open the first section of a sprawling catacomb complex which, when completed, will provide 23,000 gravesites for an increasingly crowded country.

"People will die probably forever," said Arik Glazer, chief executive of Rolzur Tunneling, the company building the tunnel tombs, "so you have to get space for that."

Land is in short supply in Israel, and Jewish and Muslim burial customs require interring the dead in the ground and prohibit cremation. The hilltop cemetery is almost at capacity, with nearly a quarter million graves. The first underground section opening in October will have capacity for 8,000. The remaining sections are slated to open in the coming years.

Like other increasingly crowded metropolises, Tel Aviv has embraced vertical cemetery structures to accommodate growing demand, but now Israel is looking for solutions below ground.

Even in the blazing summer heat, the labyrinthine vaults maintain their steady year-round temperature of 23 degrees Celsius (73 degrees Fahrenheit).

The entire project cost an estimated $50 million and took just over three years to complete. The tunnels take up just 5% of the total subterranean area of the mountain available for future tombs, Glazer said.

Part of the inspiration behind this project was the ancient Jewish custom of cave burials found at sites around the Holy Land, from the UNESCO heritage site of Beit Shearim near Haifa, to rocky hillsides around Jerusalem.

"The basic blueprints for this project were the cemetery at Beit Shearim," said Adi Alphandary, head of Rolzur's business development. Those catacombs, active between the second and fourth centuries, were recognized by the United Nations as a World Heritage Site in 2015.

Israel Antiquities Authority archaeologist Amit Reem said that families would inter the deceased's remains in the catacombs, then seal the door with a rock for eight months.

"When they opened the door of the cave, inside the cave was only the skeleton with no flesh," Reem said. The bones were then collected and often placed in stone boxes, known as ossuaries, inside the cave chamber.

While the modern-day burial chambers will simply be sealed with a grave marker, Hananya Shahor, executive director of the Jewish burial association in Jerusalem, said that Orthodox rabbis they consulted said the sprawling site is "100% acceptable according to Jewish tradition."

"We are almost sure that people will like this way much, much more than the old systems of burial," he said.