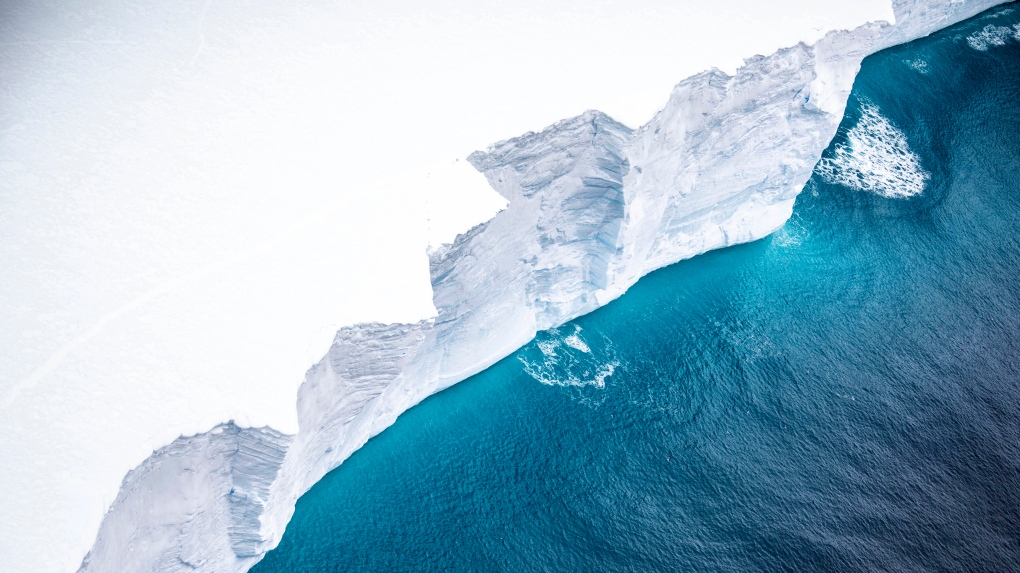 In this undated handout photo provided by the Ministry of Defense on Tuesday, Dec. 15, 2020, one of the largest recorded icebergs floats near the island of South Georgia, South Atlantic. (Corporal Phil Dye/Ministry of Defence via AP)

TORONTO -- Researchers in the United States have uncovered what they believe is evidence to suggest that once-massive icebergs floated from northern Canada to southern Florida.

Using high-resolution sea floor mapping, researchers at the Woods Hole Oceanographic Institution (WHOI) and the United States Geological Survey (USGS) discovered about 700 iceberg scours -- a term referring to “plow marks” on the ocean floor from icebergs -- that run from North Carolina to the Florida Keys.

“The idea that icebergs can make it to Florida is amazing,” WHOI climate modeller Alan Condron said in a news release. “The appearance of scours at such low latitudes is highly unexpected, not only because of the exceptionally high melt rates in this region, but also because the scours lie beneath the northward flowing Gulf Stream.”

The research, published on Thursday in the journal Nature Communications, state the icebergs were about 300-metres thick. They made the more than 5,000-kilometre trip roughly 31,000 years ago in a period known as Heinrich Event 3, which is already known for massive iceberg discharges.

“We also expect that there are younger and older scours' features that stem from other discharge events, given that there are hundreds of scours yet to be sampled,” said USGS research geologist Jenna Hill.

Given the high temperatures in the ocean water near the southern states and the natural flow of the Gulf Stream in the opposite direction of the icebergs’ travel, the researchers believe the only way the iceberg could make it that far before melting is “massive, but short-lived” glacial meltwater discharge from Hudson Bay.

“What our model suggests is that these icebergs get caught up in the currents created by glacial meltwater, and basically surf their way along the coast,” Condron said. “When a large glacial lake dam breaks and releases huge amounts of fresh water into the ocean, there’s enough water to create these strong coastal currents that basically move the icebergs in the opposite direction to the Gulf Stream.”

The researchers also note that these icebergs are crucial in controlling how much warmer water is transported from the southern U.S. to Europe through the Gulf Stream.

“As we are able to make more detailed computer models, we can actually get more accurate features of how the ocean actually circulates, how the currents move, how they peel off and how they spin around,” Hill said. “That actually makes a big difference in terms of how that freshwater is circulated and how it can actually impact climate.”