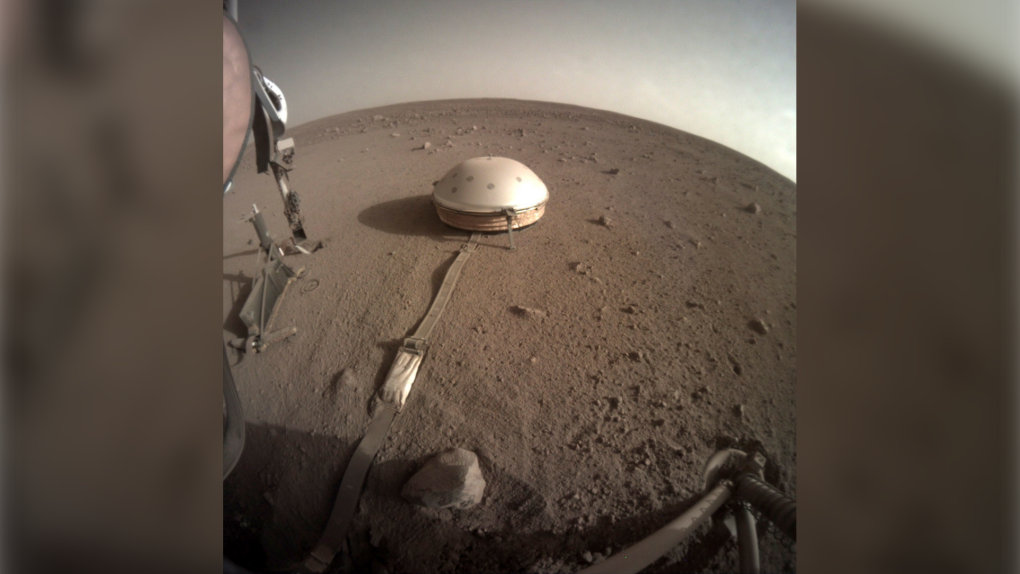 This Feb. 18, 2020 photo made available by NASA shows the InSight lander's dome-covered seismometer, known as SEIS, on Mars. On Monday, Feb. 24, 2020, scientists reported that the spacecraft has detected hundreds of quakes and even aftershocks that are regularly jolting the red planet. (NASA/JPL-Caltech via AP)

CAPE CANAVERAL, FLA. -- NASA's newest Mars lander has confirmed that quakes and even aftershocks are regularly jolting the red planet.

Scientists reported Monday that the seismometer from the InSight spacecraft has detected scores of marsquakes.

A series of research papers focus on the 174 marsquakes noted through last September. Twenty-four were relatively strong -- magnitude 3 to 4 -- and apparently stemmed from distant underground triggers. The rest were smaller, with uncertain magnitude and origin. Even the stronger quakes would not have posed a hazard to anybody on the planet's surface, researchers said in a press conference.

The overall tally has since jumped to more than 450 marsquakes, most of them small, InSight's lead scientist, Bruce Banerdt of NASA's Jet Propulsion Laboratory, said in an email.

The basic cause of Martian quakes is a long-term cooling of the planet, which makes it contract, fracturing its brittle outer layers, Banerdt told reporters. But it's not clear what detailed mechanisms bring on specific quakes, he said.

While the team cannot rule out meteor impacts, the source of the tremors appears to be underground, according to the researchers. Nevertheless, Mars-orbiting spacecraft are on the lookout for signs of recent impacts, and InSight's cameras scan the night sky for meteors. So far, they've come up empty.

Banerdt said he had hoped to find more larger quakes, which are useful for probing deeper under the planet's surface. In an email, he said "another year of observations will be needed to complete the goals of the mission."

InSight landed in a small crater in Mars' Elysium Planitia in November 2018. Its French seismometer was placed directly on the volcanic plain the following month.

This region has especially turbulent weather, with dust devil-like vortexes.

The lander still has another year of geologic observations for a total of two years, or one full Martian year. There likely are more quakes occurring than the seismometer is registering; interference from wind and other weather conditions can mask the measurements.

And while no marsquakes with magnitudes greater than 4 have been detected, that doesn't mean they aren't occurring, according to Banerdt.

Banerdt describes Mars as moderately active from a seismic standpoint, more than the moon but less than Earth. The findings are close to initial predictions. The moon's seismic activity is known thanks to instruments left behind a half-century ago by the Apollo astronauts.

"Knowledge of the level of seismic activity is crucial for investigating the interior structure and understanding Mars' thermal and chemical evolution," Banerdt wrote in an overview article in Nature Geoscience. The journal as well as Nature Communications feature four papers from the InSight team.

Other key findings: The first magnetic measurements from the Martian surface show a local magnetic field that's 10 times stronger than detected from orbit, and weather instruments have found a surprisingly dynamic atmosphere around the spacecraft.

While the French seismometer is exceeding expectations, a German-built probe has had trouble burrowing into Mars, barely penetrating a couple feet (50 centimetres). Scientists have not yet given up on the mechanical mole, which keeps popping out of the ground.

The mole was supposed to bury 16 feet (5 metres) into Mars to measure the planet's internal temperature.