Mars didn't lose all of its water at once, based on Curiosity rover find 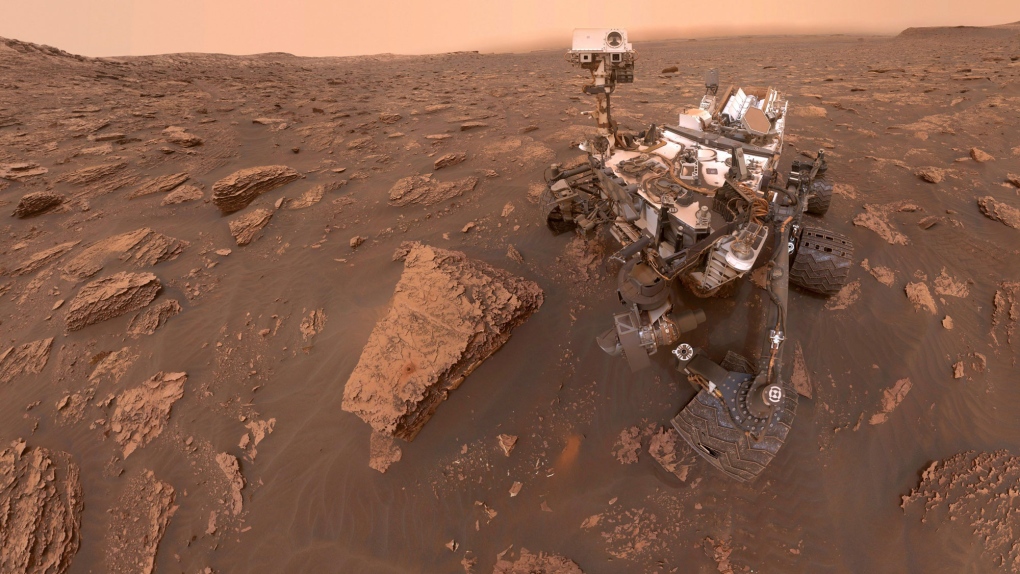 This composite image made from a series of June 15, 2018 photos shows a self-portrait of NASA's Curiosity Mars rover in the Gale Crater. The rover's arm which held the camera was positioned out of each of the dozens of shots which make up the mosaic. A dust storm has reduced sunlight and visibility at the rover's location. (NASA / JPL-Caltech via AP)

Mars was a warm, wet planet that was likely capable of supporting life billions of years ago. Something caused the planet to lose its atmosphere and turn into the harsh, frozen desert it is today.

The Curiosity rover, which landed on Mars in 2012, has been exploring different aspects of Gale Crater on Mars to understand more about this transition from warm and wet to dry and very cold.

The latest study, gathered from data captured by one of the rover's instruments, suggests that Mars actually transitioned back and forth between wetter and drier times before losing its surface water completely around three billion years ago.

Curiosity has been steadily climbing the 3-mile-high Mount Sharp, located at the center of Gale Crater, since 2014.

An instrument called a ChemCam sits on the rover's mast and includes a high-resolution camera and laser that can vaporize rocks to help the rover analyze their chemical composition. ChemCam has an infrared-colored laser that can heat rock pieces to 18,000 degrees Fahrenheit. This vaporizes the rock and creates plasma, allowing scientists to essentially look inside the minerals and chemicals comprising the rock and peer back into the planet's geologic history.

The camera on ChemCam was used for capturing observations of Mount Sharp's terrain, which reveals slices of the Martian past as the rock varies.

Mount Sharp is an intriguing feature on Mars because it's one of the best ways the red planet recorded the history of its climate, water and sediment.

"A primary goal of the Curiosity mission was to study the transition between the habitable environment of the past, to the dry and cold climate that Mars has now. These rock layers recorded that change in great detail," said Roger Wiens, study co-author on the paper and ChemCam team scientist at Los Alamos National Laboratory, in a statement.

The study published last week in the journal Geology.

Orbiters around Mars have previously recorded information about the minerals within Mount Sharp's slopes. Curiosity's data has provided even more detailed observations from the layers of sedimentary rocks and revealed dry and wet periods across the planet's past.

As Curiosity has ascended Mount Sharp, the layers have changed dramatically.

The base of Mount Sharp is made of clay deposited by the lake that once filled the crater. Above that are layers of sandstone that still preserve evidence of how they were formed by wind-shaped dunes during drier times. Layers above this reveal more deposits from the flood plain, indicating when wet conditions returned to Mars.

Curiosity's observations reveal that these changes between wet and dry eras were large-scale events that alternated until the planet grew permanently arid. Mount Sharp's climate record has allowed Curiosity to hone in on a time stretching from 2.9 billion to 3.7 billion years ago.

As the rover continues its mission, Curiosity will keep ascending the foothills of Mount Sharp and use its drill to further explore the types of rock and what they reveal. This could provide more insight about the cause of such drastic climate fluctuations.