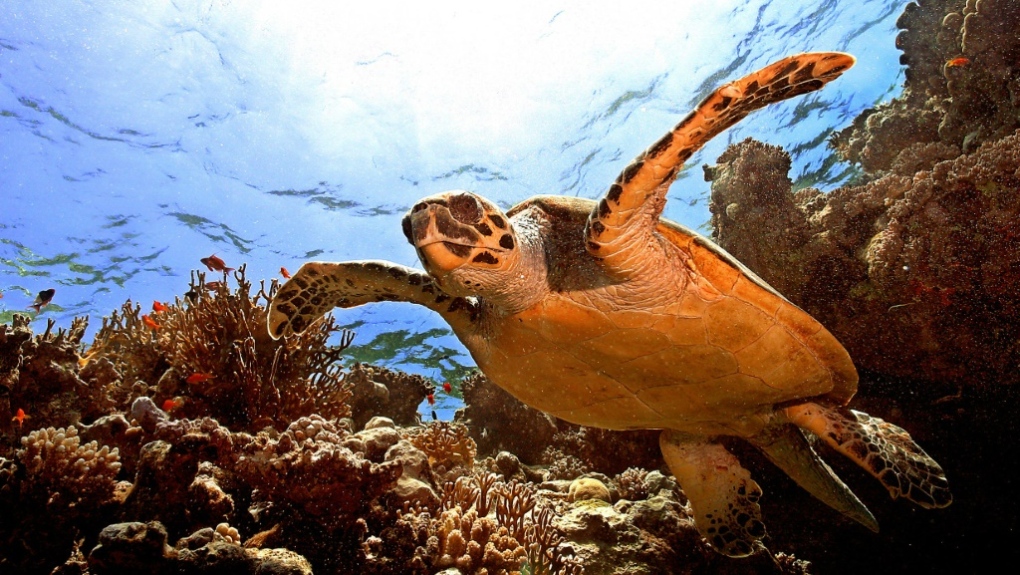 A sea turtle can be seen swimming in this undated photo. (AFP)

PARIS -- Fish and other marine life may have to flee thousands of kilometres to escape damaging heatwaves, according to research published Wednesday, highlighting the scale of disruption caused by these increasing surges in ocean temperatures.

Researchers said the increasing number of marine heatwaves are a sudden shock to local ecosystems. whose effects can last months or in some cases years.

They are an additional stress on oceans that are also seeing long-term warming, says the study published in the journal Nature.

The researchers looked at how far a species caught in a marine heatwave would have to travel to get back to a normal water temperature, in what they term "thermal displacement".

Previous research focused on measuring the intensity of the temperature change at the location of the heatwave and the effects on static habitats, like kelp forests and coral reefs, researchers said.

Thermal displacement "adds a new dimension" to our understanding of these heatwaves, lead author Michael Jacox of the US National Oceanic and Atmospheric Administration told AFP.

"It's important because we know that many marine species can quickly move long distances to find favourable habitat. They won't just stay in place when the water is too hot, so the question is how far must they go to find cooler water?" he said.

To answer this, researchers analysed data of marine heatwaves from 1982 to 2019 and looked at the species displacement associated with these events.

In some areas, cooler water would not be far away, such as where different regions of the ocean meet.

But in tropical waters, where variations in temperatures are relatively small, the study found that species would have to travel more than 2,000 kilometres (1,200 miles) to find suitable habitat.

"Some of the most mobile species -- many fish, whales, and turtles -- hold great value for humans, whether it's for fisheries, tourism, or from a conservation perspective," he said.

At the end of 2013 an unusually warm patch of water that became known as "The Blob" appeared near Alaska and began to expand, stretching all the way to Baja California around 4,000 kilometres away by late 2015.

This vast marine heatwave caused mass strandings of marine mammals and seabirds along the west coast of the United States and Canada and killed off swathes of seagrass meadows and kelp forests.

"Warm-water species such as thresher sharks, hammerhead sharks, and mahi mahi (aka dolphinfish) were sighted farther north than ever before," said a 2016 report on "The Blob" in the peer-reviewed magazine Oceanography.

Mark Payne of the Technical University of Denmark said marine heatwaves were some "of the most visible signs of an ocean under stress", in a commentary in Nature.

He noted that species may not always be able to find a suitable habitat to relocate to, or are unable or unwilling to move, such as parents guarding young.

But he said that the study by Jacox and colleagues -- which he was not involved in -- "expands our perspectives" of these heating events.

These are "expected to increase dramatically in the future, given that the increases are linked to climate change".

Last year, research published in the U.S. Proceedings of the National Academy of Sciences calculated that climate change would empty the ocean of nearly a fifth of all living creatures, measured by mass, by the end of the century.