Mapping the Beirut explosion: What the impact would look like in Canadian cities

TORONTO -- A massive explosion rocked Beirut on Tuesday, flattening much of the city's surrounding area and damaging buildings across the capital.

Officials say the explosion was caused by a fire that set off more than 2,750 tons of explosive ammonium nitrate at a warehouse in Beirut's port. The blast killed at least 135 people and wounded about 5,000 others, according to Lebanon's health minister. 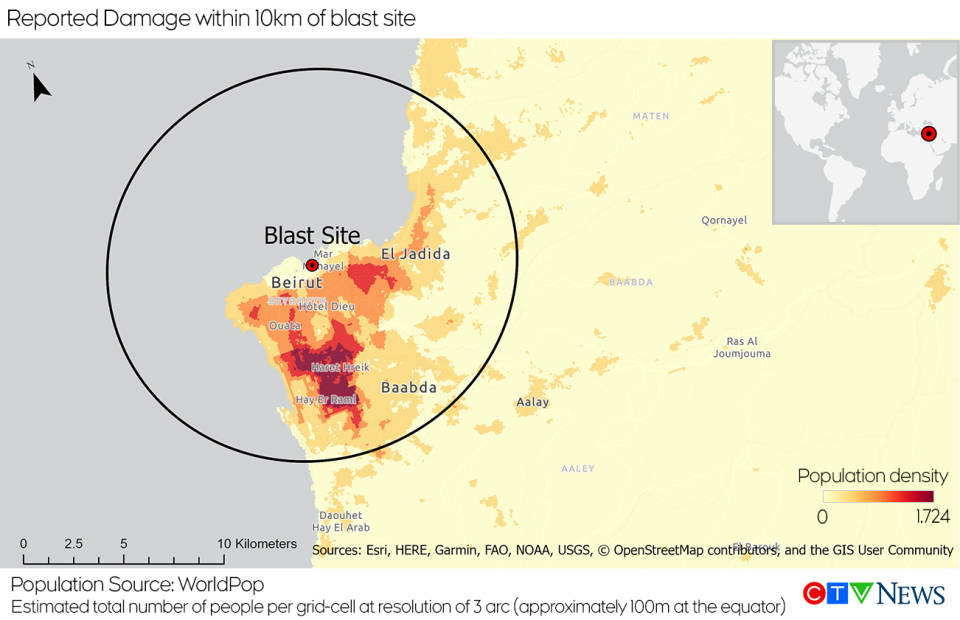 Seismologists measured the event as the equivalent of a 3.3-magnitude earthquake, sending tremors throughout Beirut's industrial waterfront into the city's densely populated downtown areas and residential neighborhoods.

The shock wave of the explosion was heard and felt as far away as the island of Cyprus, more than 240 kilometres across the Mediterranean. That is roughly the same distance between Saskatoon and Regina or Montreal and Quebec city. 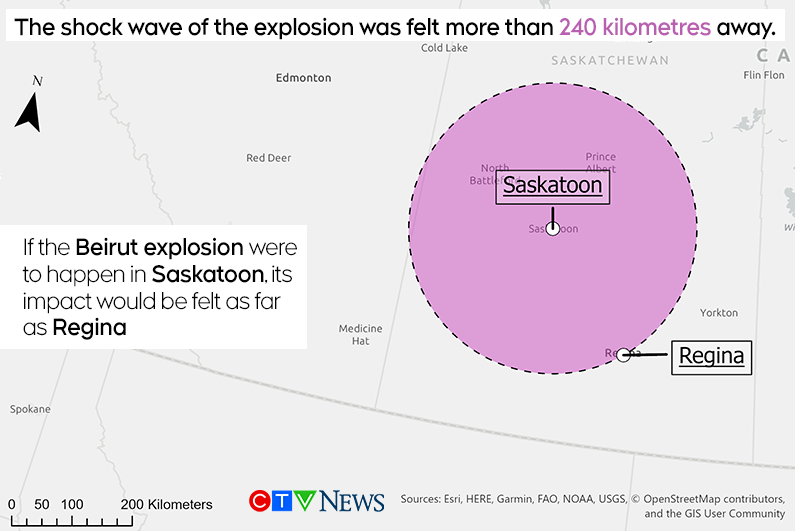 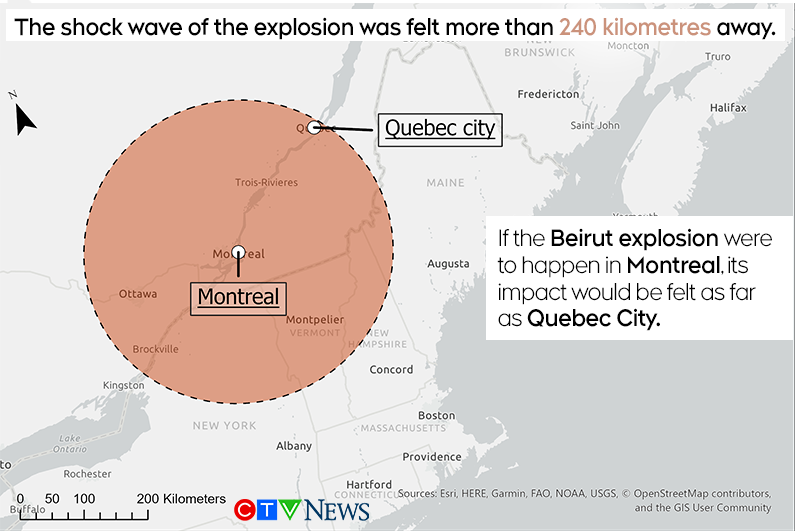 Dozens of nearby buildings in Beirut were severely damaged or destroyed as the explosion left a crater 200 metres across in the port. Officials reported that warehouses up to three kilometres in the area were completely flattened following the blast, scattering debris and broken glass even further. Damages were reported at the city's international airport approximately 10 kilometres away.

If the explosion took place in the Port of Vancouver, here is how the radius of damages would compare. 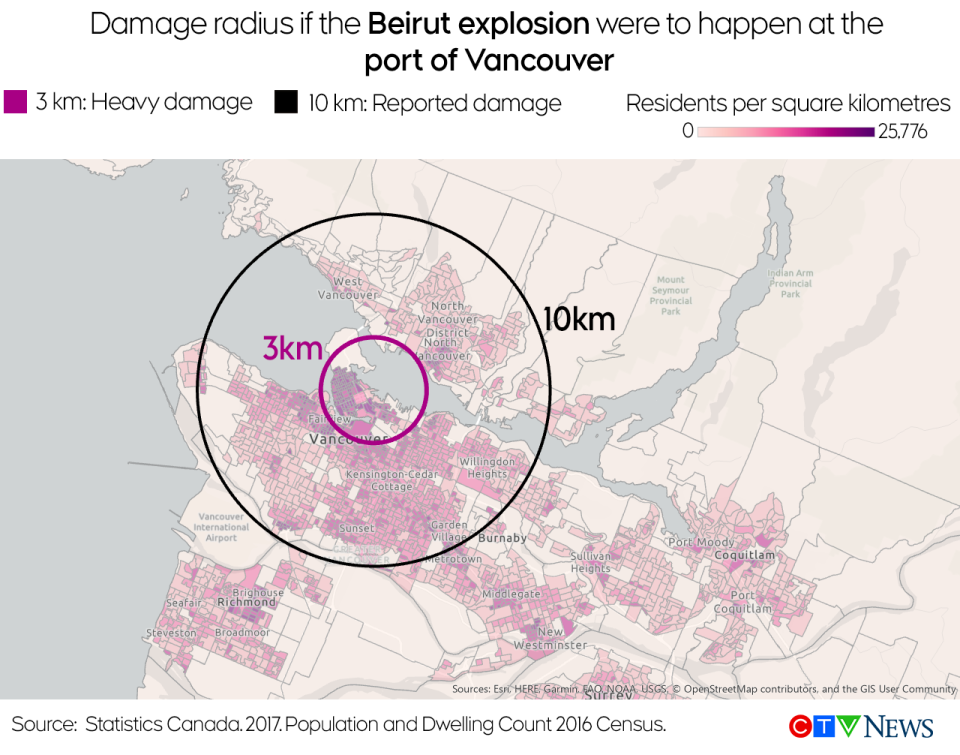 Here's how that radius would compare if the blast occurred in Toronto’s port. 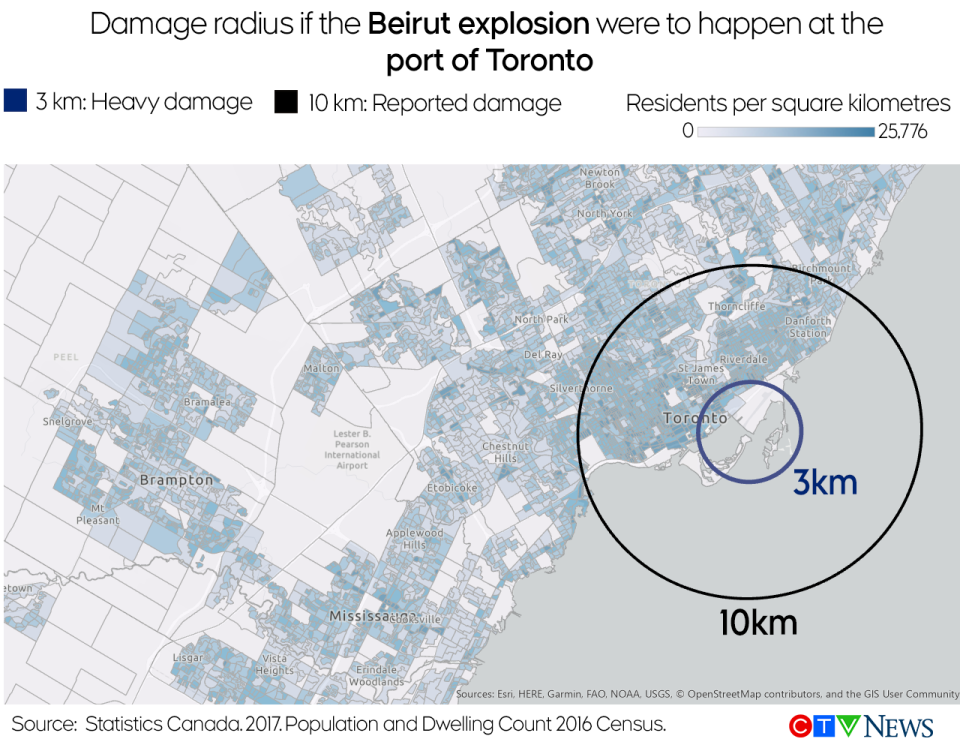 Videos and photos taken from the scene showed a mushroom-like cloud of smoke hovering over the port before a burst of red-orange-brown fumes exploded into the sky. Officials say chemical components in the ammonium nitrate caused the smoke to turn these colours. The common chemical -- typically used as a fertilizer -- had been sitting in Beirut's port since it was confiscated from a cargo ship in 2014. Local authorities are investigating how the ammonium nitrate was left for six years without proper safety precautions.

The Beirut blast echoes that of an explosion that occurred more than 100 years ago in Halifax.

On Dec. 6, 1917 in the Halifax Harbour, the Norwegian ship SS Imo collided with the SS Mont-Blanc, a French ship containing high explosives en route to the war in Europe. The collision started a fire aboard the Mont Blanc and a few minutes later, the ship exploded.

The blast levelled two square kilometres of Halifax and windows were shattered within an 80-kilometre radius. Two thousand people died and it is estimated that another 9,000 were injured.

Here's how the city would be impacted if an explosion like the one in Beirut were to happen in the Port of Halifax today. 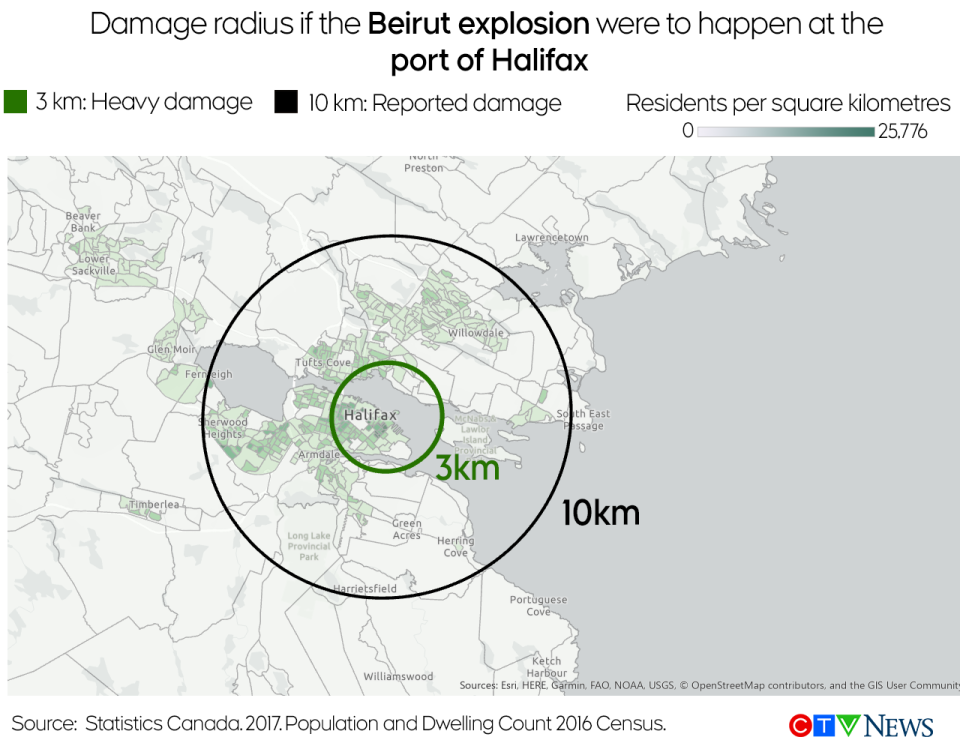 However, the closest comparison to Beirut may be an ammonium nitrate blast that happened in Texas City in 1947 where a fire caused over 2,000 metric tonnes of the fertilizer to explode, damaging more than 1,000 buildings and killing over 500 people.

More than 100 people were also killed in the port city of Tianjin, China in 2015 when a warehouse containing several hundred tons of dangerous chemicals, including ammonium nitrate, went up in a series of massive explosions.