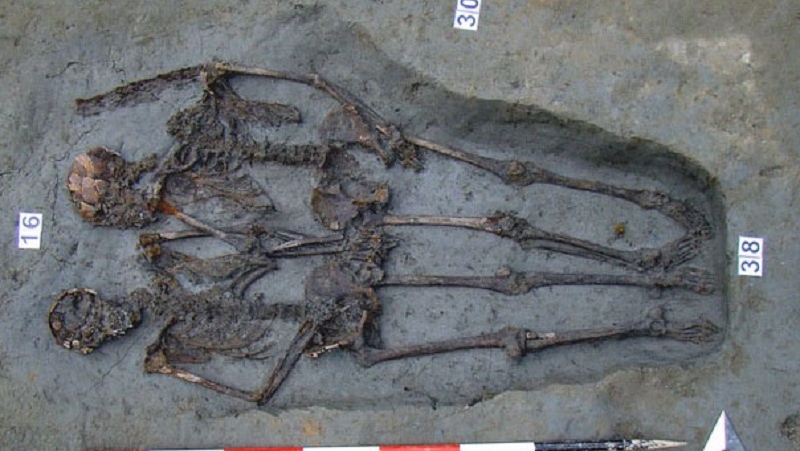 Italian researchers have discovered the famed 'Lovers of Modena' skeletons were both men. (University of Bologna)

Italian researchers have discovered that the so-called ‘Lovers of Modena’ -- a pair of skeletons buried side-by-side, intentionally holding hands -- were both men.

When archeologists first made the discovery near Modena in northern Italy in 2009, they couldn’t establish the sex of the skeletons because the remains were in such a poor state.

However, there were rumours that the bones, from between the 4th and 6th century AD, belonged to a man and woman who were in love given the way they were buried.

Now a group of researchers from the University of Bologna have determined the sex of the skeletons, thanks to a new technique of extracting protein from tooth enamel.

This discovery “may have profound implications for our understanding of funerary practices in Late Antique Italy,” the researchers wrote in the study.

This isn’t the first time two skeletons were discovered hand-in-hand or embracing, but all the other documented cases were a man and a woman.

A young couple who died 6,000 years ago were discovered buried in an embrace in Mantua, Italy. They were known as the Lovers of Valdaro. Similar discoveries were made in Greece, Turkey and Siberia.

Along with the Lovers of Modena, 11 skeletons were also discovered in a similar area. Some of the skeletons showed signs of trauma and could have suffered a violent death during war.

The researchers believe the Lovers of Modena were buried together because they were friends or war comrades and died in battle together.

The study was published on Wednesday in the research journal Nature.