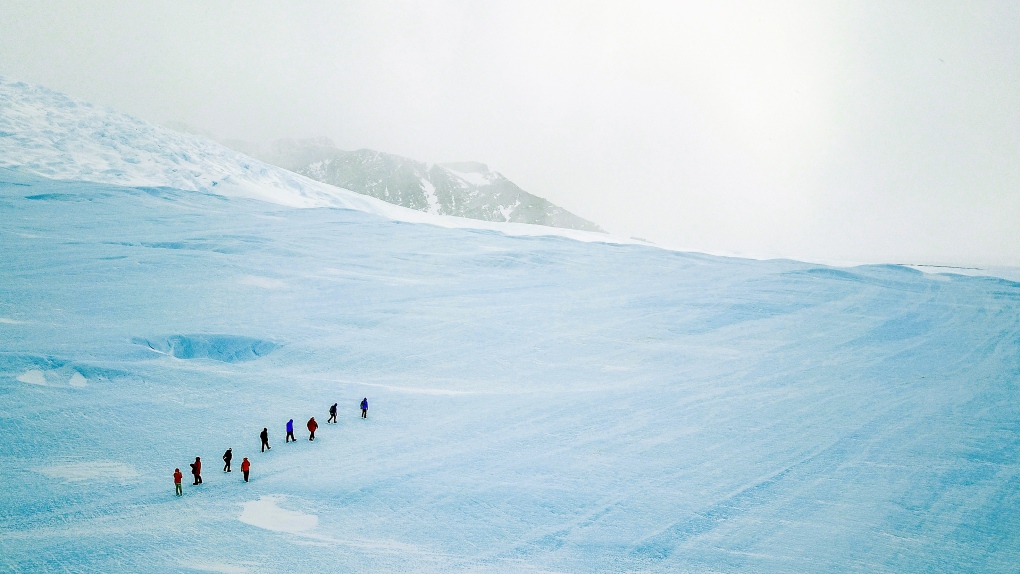 People hike along blue-ice during an excursion to the Drake Icefall in this 2018 image provided by Airbnb. (Christopher Michel / Airbnb)

TORONTO -- A crew of scientists on a long-term expedition to Antarctica saw a portion of their brains shrink, a side effect potentially related to them being in an isolated monotonous environment, according to a small-scale study.

The study, published in the New England Journal of Medicine on Wednesday, used magnetic resonance imaging (MRIs) to scan crewmembers’ brains before and after the polar expedition.

On average, a crewmember’s hippocampus (the brain area crucial for memory) shrank by seven per cent. Their brains were compared with healthy individuals with the same age and gender who didn’t go to the station.

A core group of eight scientists and researchers spent 14 months at a German research station called Neumeyer-Station III as part of the study, dealing with the all-day darkness of the polar winter and temperatures which could drop to below -50 degree Celsius.

The research suggests that the arctic expeditioners had been missing out on brain stimulation while they lived in the isolated station with the same small crew.

The shrinkage of the hippocampus affected spatial processing and selective attention, and likely affected how they dealt with emotions and interacted with others, according to the study. The hippocampus is one of the few regions which generates new neurons as people gain new memories.

Researchers also noticed that the levels of a certain protein -- which supports the growth of new neurons – had dropped by about 45 per cent on average by the end of the scientists’ stay.

But the change to the scientists’ brains is likely reversible because the hippocampus is highly affected by factors such as prolonged isolation or stimulation.

In an interview with Science News, physiologist Alexander Stahn, who began the research while he was at German university hospital Charité-Universitätsmedizin Berlin, explained the arctic environment like this: “it’s very exciting to see the white desert at the beginning … but then it’s always the same.”

Stahn, who’s now researcher at the Perelman School of Medicine at the University of Pennsylvania, noted that the long, monotonous atmosphere could be compared to astronauts on long missions away from Earth.

The authors caution that because of the study’s small sample size, the data should be interpreted with caution, as the exact factors of the expedition affected the brain shrinkage were not entirely determined.

In the future, the team would be looking at ways to prevent this type of brain shrinkage during prolonged stays in isolated environments.

The most recent findings echo previous hippocampus studies with rats, which found rodents were better at learning when they’re housed with other rats.

But this wasn’t the case when the rats were living alone or in an empty cage. What these studies found that rats spending long periods of monotonous environments, blunted their ability to build new neurons.