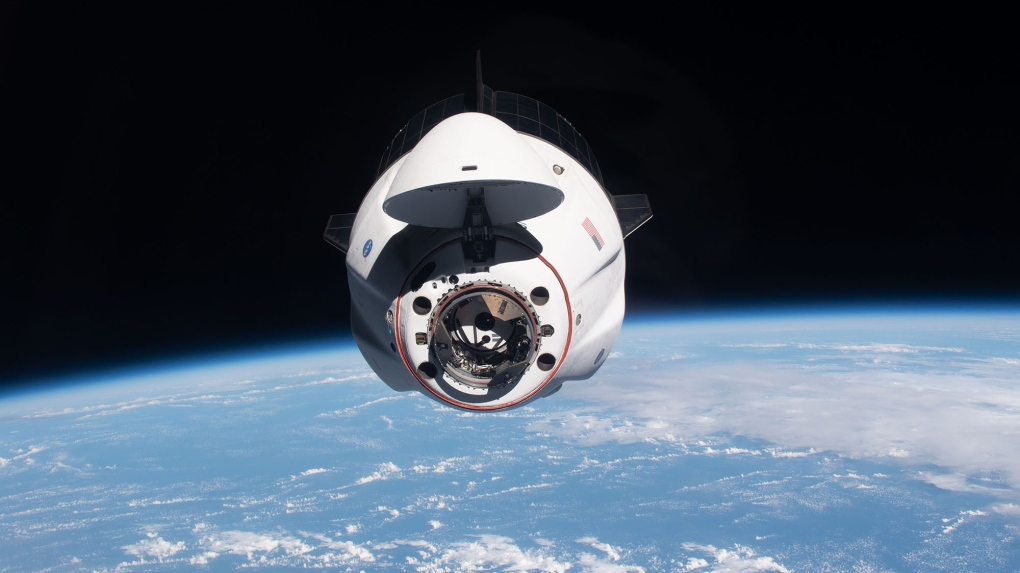 Issues with the toilet on board SpaceX's Crew Dragon capsule will leave a group of four astronauts without a bathroom option during their hours-long trip back home from the International Space Station aboard the capsule this month. (NASA/CNN)

Issues with the toilet on board SpaceX's Crew Dragon capsule will leave a group of four astronauts without a bathroom option during their hours-long trip back home from the International Space Station aboard the four-metre-wide capsule this month.

Instead, the crew will have to rely on "undergarments," Steve Stich, NASA's Commercial Crew Program manager, told reporters Friday night.

SpaceX first discovered an issue with its spacecraft's toilet last month while inspecting a different Crew Dragon capsule. The company found that a tube used to funnel urine into a storage tank became unglued, and was causing a leaky mess hidden beneath the capsule's floor. It's a saga that, at this point, has affected all three spacecraft the company operates.

NASA did not say how long the four astronauts — NASA's Shane Kimbrough and Megan McArthur, French astronaut Thomas Pesquet of the European Space Agency, and Akihiko Hoshide from Japan — will have to be on board their Crew Dragon capsule with an inoperable toilet. So far, only two Crew Dragon spacecraft have returned from the ISS with people on board, and the first of those trips took 19 hours, while the second only took six.

Timing will depend on a several factors, including how orbital dynamics and weather affect the return trip, but "we are working to try to always minimize that time from undock to landing and so that's what we'll do with this flight," Stich added.

A problem with Crew Dragon's toilet was first identified during SpaceX's Inspiration4 mission in September, which carried four people on the first all-tourism mission to orbit, where they spent three days.

Jared Isaacman, the commander and financier of the Inspiration4 mission, as it was called, told CNN Business last month that an alarm went off during the mission, alerting the crew to a problem with the toilet's fan. He said he and his fellow passengers had to work with SpaceX controllers on the ground to troubleshoot.

"There's a storage tank where the the urine goes to be stored [and] there's a tube that came disconnected or came unglued," said William Gerstenmaier, a former associate administrator at NASA who now works as SpaceX's head of mission assurance. "That allowed urine essentially to not go into the storage tank, but essentially go into the fan system."

The situation highlights how spacecraft that have conducted all the necessary test flights, been vetted and approved, and even completed full missions can still prove to have design risks.

Fans are used on spacecraft toilets to create suction and control the flow of urine because, in the microgravity environment of space, waste can — and does — go in every possible direction.

In this particular case, the Inspiration4 crew did not notice any excreta floating around the cabin because the leakage was still relegated to sealed-off areas underneath the floor, Gerstenmaier said.

SpaceX is working to clean up and fix the issue on the Inspiration4 spacecraft, which is named Resilience. A brand new Crew Dragon capsule, dubbed Endurance, that is slated to take four more astronauts to the ISS on Wednesday, will have the fix built in.

But the group of four astronauts already on board the ISS launched there in April, before the toilet woes were discovered. Their capsule, the Crew Dragon Endeavour, has remained attached to the ISS, serving as a potential lifeboat and sitting ready to take them home. And when astronauts recently inspected the capsule, they found it too had a leaky toilet and there was evidence of urine leaking into the walls. But since they're still in space, they don't have a way to immediately fix the issue.

The space station has its own bathrooms, so it won't be an issue while the astronauts are still on board the orbiting laboratory. But once they get back on board their capsule and begin their return trip — which could happen as early as this weekend, according to NASA — they'll have to rely on the stopgap undergarment option.

The spacecraft should still be relatively safe to fly, if not slightly less comfortable than before.

SpaceX ran a series of ground tests to make sure the Crew Dragon's aluminum structure could hold up to the leaked urine and that the substance hadn't become dangerously corrosive.

Basically, SpaceX researchers coated some pieces of metal in urine mixed with Oxone — the same substance used to remove ammonia from urine on board Crew Dragon — to see how it would react with the aluminum. They put it inside a chamber to mimic the vacuum of space, and they found limited corrosion, Gerstenmaier said.

"We'll double check things, we'll triple checks things, and we got a couple more samples we'll pull out of the chambers and inspect," he said last week. "But we'll be ready to go and make sure the crew is safe to return."

Matthew Tkachuk scored a hat trick for the Calgary Flames in Wednesday's 9-6 win over the Edmonton Oilers to open their NHL playoff series.

It has been almost exactly one year since the Tk'emlúps te Secwépemc confirmed evidence of what elders and residential school survivors had been saying for years about missing children being buried on the grounds of the former Kamloops Indian Residential School.